A stellar cast — Angela Gheorghiu, Vittorio Grigolo, RenÈ Pape and Dmitri Hvorostovsky — made this a sense of occasion, although the production, by David McVicar, was first seen in 2004. The performance worked well because there was good integration of all elements that contribute towards operatic experience — singing, staging, acting and orchestra. Following on from the superb Puccini Il trittico (reviewed here), it made for a spectacular start to the 2011/2 season at the Royal Opera House, London.
McVicar himself wasn’t present, but revival director Lee Blakely must have inspired the cast, for they were singing with great panache. Perhaps a little too much at times, for both Gheorghiu and Grigolo threw themselves so passionately into their parts that at times, there were weaknesses. But better this enthusiasm than technically note-perfect and dull. Faust and Marguerite don’t have MÈphistophÈlËs’s demonic powers, but they beat him in the end. 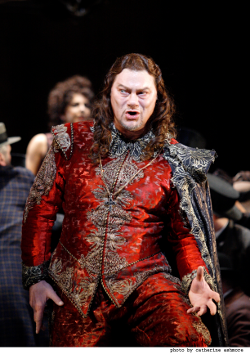 RenÈ Pape as MÈphistofËlÈs
It was touching to see how genuinely happy Gheorghiu seemed to be when she comes upon the jewel box and forgets the studied froideur, with which she sang “The Song of the King of Thule.” If her diction wavers, it’s not entirely out of context. Gheorghiu’s Marguerite, despite the unflattering blonde wig, is sympathetic. Faust’s sacrificing love becomes altogether plausible.
Faust stretches Vittorio Grigolo vocally, but he compensates with expressive acting. His bright, exuberant timbre creates a Faust who’s hypnotized by the excitement of being young, a junkie to the thrill of new sensations. Thus he fits well with RenÈ Pape’s suave MÈphistophÈlËs. This opera is as much about social values as metaphysical struggle, so Pape’s sophisticated “French” urbanity may indeed be preferable. The humour in the plot, and the dogged cheerfulness in much of the orchestral writing indicates a lighter touch than obvious melodramatic malevolence.
Gounod’s long sequences for ballet are integral to the opera because, like the mercurial scene changes, they add sparkling wit. The witches in Walpurgis Night aren’t ugly crones but seductive ballerinas, who in this production have an orgy with the male patrons of the ballet. Just as Faust is tempted by sex, and MÈphistophÈlËs is repelled by Marthe (Carole Wilson)’s generous offer, so were audiences in Gounod’s time titilliated by tutus and dancers of easy virtue. These “witches” are free spirits of nature. Margeurite and Faust do what comes naturally. When MÈphistophÈlËs sings about “Reines de beautÈ, de l’antiquitÈ”, Pape wears a woman’s black gown. Perhaps the reference is to Ortrud and her ancient gods, but more likely it connects to Goethe’s Eternal Feminine, temporarily usurped by Satan. 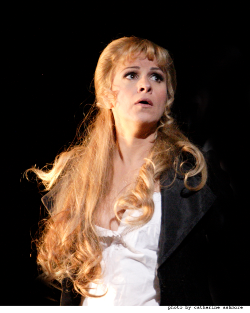 Angela Gheorghiu as MarguÈrite
Hence the creation of SiÈbel as trouser role (MichËle Losier,). Nothing is quite what it appears to be in this moral universe. Even the “sculpture” in the church turns out to be MÈphistophÈlËs in a marble-coloured cape.
There’s a similar logic to Gounod’s emphasis on the military.context. It’s great theatre and the rousing march “Gloire immortelle” is justly famous. It expands the part of Valentin, Marguerite’s brother, for he symbolizes the moral force that stand up to MÈphistophÈlË’s sensual wiles. Dmitri Hvorostovsky is luxury casting, and his big arias, especially the curse, were superbly dramatic. In this production, he also has to act a lot, both in the sword scenes and in the ballet, where now he’s one of the undead, and is tempted. Macabrely, by the dancers. Perhaps Valentin doesn’t have to be.young, but Valentin’s naivety is so much a part of the role that we should cherish Hvorostovsky while we can.
Stage designs, by Charles Edwards are sumptuous, but as usual, his designs “act” amplifying themes in the drama. Town transforms to church then to the Harz mountains and to the ThÈ‚tre Lyrique, as mercurially as MÈphistophÈlËs can transport Faust through time and place. Spartan gloom to gorgeous luxury to desolation, like Faust’s life. Marguerite’s redemption seems even more miraculous. There’s no need to lift her up to the ceiling. Gheorghiu lies still, lit in pristine simplicity.
So much in this opera depends on the orchestra and the choruses, and this we had in abundance. Evelino PidÚ first conducted at the Royal Opera House in 1993, His experience and focus pulled all the elements of the performance together extremely well.
For more information, please see the Royal Opera House website.
Anne Ozorio

All photos by Catherine Ashmore courtesy of Royal Opera House