The irony there is that L’Amour des trois oranges debuted in Chicago, and legendarily, almost bankrupted the company. Of course, the “March” from the score is one Prokofiev’s smash hits, and the entire suite the composer derived from his score contains much fine music, in the composer’s inimitable mix of idiosyncratic melodicism and ingenious orchestration.
The temptation to stage the opera should probably be resisted, however, and U.S. companies that live and die at the box office and by donors’ generosity have no problem doing so. That’s probably due to the fact that no matter how attractive Prokofiev’s music is, the opera is tiresome and dated in its “modernistic” blend of fairy tale and farce. The original Carlo Gozzi play may or may not be a fine piece of literature, but the libretto that the composer and Vera Janacopoulos adapted from it overestimates the ability of stock comic characters and surrealistic action to support a cohesive evening of musical theater. 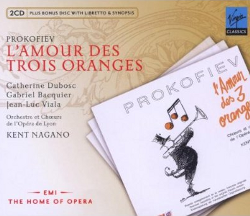 Two recent releases of the opera, one on DVD and one on CD, highlight the opera’s problems — ironically, by their sheer excellence. Despite the brilliant musical performance Kent Nagano leads in the 1989 Virgin Classics recording, without any visual element the score becomes a test of patience as the listener awaits the end of the “declarative” sections and an outburst of Prokofiev’s scintillating orchestral interludes. The cast is able but not compelling. Virgin provides, in its budget line, a third disc containing the libretto and notes.
On DVD, the 2005 Paris Opera production of director Gilbert Deflo can at least be enjoyed for its theatrical invention, with creative sets and costumes by William Orlandi. The performers are clearly having a wonderful time. However, the masks and make-up dampen even more the flat characters such reliable performers as Barry Banks and Beatrice Uria-Monzon inhabit. With no emotional involvement on the audience’s part, a few chuckles aren’t enough of a theatrical reward. Chuckles are better than groans, however, which many viewers will emit in the scene with a female character in blackface.
A 30 minute bonus feature, audaciously titled “How to Fall in Love with Three Oranges” only demonstrates the opera’s problems, as it mostly consists of the performers laboriously recounting their character’s actions and, without much conviction, trying to assign routine human motivations to the nonsensical action. Conductor Sylvain Cambreling selected a score edition which reprises the famous March so often that by the closing iteration one may not want to hear it ever again.
For those with more admiration for the score or opera than this reviewer, both these versions can be recommended for their overall high quality. For those in sympathy with the views expressed here, look for any orchestral performance of the suite. L’Amour des trois oranges is more than its famous “March” — but still not a successful opera.
Chris Mullins