Revered by artists and intellectuals, he was (according
to an informative programme essay) considered by Delacroix to be superior to
Mozart, while Stendhal asserted that his genius was equal to that of
Raphael!

Nowadays, Cimarosa is best known primarily for his comic masterpiece, Il
matrimonio segreto (The Secret Marriage). However, once again
Bampton Classical Opera have delved into the archives and located another
melodious, charming gem richly deserving of a wider audience.

Covering a single day during a time of war, and set in a London hotel,
The Italian Girl in London is a typically daft buffa tale of
muddle, misunderstanding and mayhem. Resident are an eclectic bunch of
Europeans: an eminently sensible, if self-righteous, Dutchman, Sumers; Don
Polidoro, an ardent Italian; and the morose English aristocrat, Milord
Arespingh — their needs catered for by the ÈmigrÈ Italian hostess, Madama
Brillante, assisted by her French waitress, Henriette. The foreign visitors
find English manners and customs baffling, but despite their national
differences, all three men are equally entranced by the captivating Henriette.
In fact, ‘Henriette’ is actually Livia — formerly affianced
to, and jilted by, Milord, who has been ordered by his father to marry the
ghastly Diana. Polidoro is the object of Madama’s own amorous attentions,
but she is determined to embarrass him for his infatuation with Livia. So, she
explains that the girl can make herself invisible using a magic bloodstone, and
tricks him into making amorous advances to thin air. Meanwhile, Sumers has
learned of Milord’s forthcoming marriage and resolves to protect Livia
from the inappropriate attentions of others. The protagonists lurch from one
melodrama to the next: the deluded Polidoro searches for his own bloodstone in
order to advance his courtship with Livia; driven to despair by thoughts of a
life with Diana, Milord demands that the Italian spares him his fate by running
him through with a sword; Livia is arrested (a ruse intended by her father to
prevent her running away from home), before the chivalrous Sumers comes to her
rescue. Inevitably, there is a sentimental resolution to the pandemonium: the
puzzles are solved, the disorder dispelled, and both lovers and nations
celebrate peaceful reconciliations.

Following fully staged performances earlier this season at Bampton,
Westonbirt and at the Buxton Festival, Bampton Classical Opera presented the
opera at St. John’s Smith Square with only costumes and minimal props to
recreate the Victory Bar at the down-at-heel ‘Nelson Hotel’; a
Rubik Cube (which fascinates but defeats the dim-witted Milord) and a rack of
Charles & Di postcards serve to establish the year, 1982. At Buxton sets
and staging were wittily deployed to complement the entertaining translation by
Jeremy Gray and Gilly French, and this visual humour was missed, especially in
the barmy finale to Act 1. Perhaps some side flats would have helped, but,
although the stage business was necessarily quite limited given the
restrictions of the St. John’s performing space, the young cast did
succeed in conjuring up a frothy, sunny atmosphere — although the
nautical cutlasses were more anachronistic when drawn from the umbrella stand
than they had been when plucked from a wall display of maritime memorabilia! 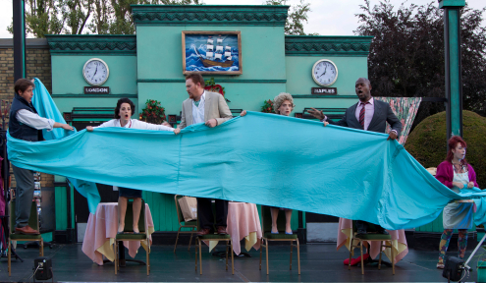 The finale of Act I

Although the commedia dell’arte stereotypes are rather
two-dimensional, focused acting from the whole cast quickly established strong
characterisation: Nicholas Merryweather demonstrated a typically sharp
appreciation of comic timing and gesture, and Adam Tunncliffe made much of the
rather ‘flat’ role of Sumers, engaging the audience’s
attention effectively in well-acted, focused recitatives. He demonstrated a
flexible, pleasing tenor as he introduced a much-needed touch of sobriety into
the inane proceedings. Even the silent roles — Rosa French, as the
hotel’s gum-chewing maid, and director Jeremy Gray, attempting to restore
order with his police officer’s hand-cuffs — contributed
considerably to the capers and drolleries.

The singers enjoyed Cimarosa’s graceful, shapely vocal lines; while
there is little flamboyant coloratura, the well-crafted phrases do allow for
textual clarity, and diction was uniformly clear. Merryweather excelled in this
regard; moreover, he charmingly varied his tone to indicate the passionate
Italian’s whims and wiles — his crafty whispered asides, with
perfect intonation and crisp enunciation, were particularly impressive. As a
poised and dignified Livia, Irish soprano Kim Sheehan produced a pleasing round
tone, never strident at the top, and conveyed tender pathos when destined for
imprisonment.

Bass Robert Winslade Anderson (Milord) seemed a little hesitant at first,
and on occasion strayed from conductor Thomas Blunt’s beat, but to be
fair, placed in front of the orchestra and without a monitor to aid them, all
the cast had to work hard in this regard. And, in an explosive jealous outburst
in his Act 2 aria, Anderson presented a confident portrait of blustering
pomposity, making excellent use of the text to develop characterisation. As the
knowing, worldly Madama Brillante, Caryl Hughes’ Act 2 cavatina was
particularly lively and bright.

Placed centrally on raked staging behind the singers, Bampton Classical
Orchestra delivered a neat, precise performance, understated and accurate,
never overwhelming the young voices. Textures were elegant, articulation
appropriately nimble, and Charlotte Forrest’s continuo accompaniments
were elegantly decorative. Blunt judged the tempi well, particularly in the
galloping Act-finales; after a series of solo arias he confidently led cast and
players as the momentum accumulated towards the cheerful, buoyant
conclusion.