It is a question that Berlioz, to his frustration, never quite answered.
In his youth, bel canto held the stage, and the tone was set by Rossini and
Bellini; by his maturity, grand opera and its rather different conventions had
taken over. How was a composer of the highest aspirations to structure a work
that was to give rein to experience and perception? The reliable but chilly
structures of the Baroque and the da capo aria, with its implied assurance that
the world was to return to the given social order, just as the singer was bound
to return to the first melody, were not going to prove satisfactory; the very
different example of the opera-comique in France, with its bumptious mixture of
popular entertainment and cultivated composition was, for a composer like
Berlioz, little inspiration. The failures of Schubert’s
Fierrabras and Schumann’s Genoveva as dramatic vehicles
functioned as a kind of warning, and the silence of Brahms — his profound
disinterest in writing for the stage — was instructive. Only
Weber’s Freischutz, and, to a lesser extent, his Euryanthe and
Oberon, established and retained places on the international stage,
and in the allegiances of popular and learned auditors.

By the time Berlioz wrote BÈatrice et BÈnÈdict, he had endured a
lifetime of frustration and misunderstanding in opera. No composer has ever
loved drama more, or more instinctively, than Berlioz, yet he had the greatest
difficulties — many self-imposed — in creating vehicles that played
as drama. Benvenuto Cellini is a mess of color and action; La
Damnation de Faust, despite recent efforts by the Metropolitan Opera, is
almost inert dramatically; Les Troyens is a magnificent masterpiece,
but long, unwieldy, and intermittently static. Beatrice and Benedict, which he
wrote in the early 1860s, is an odd creation by almost any standard. The story,
extracted by Berlioz himself from Shakespeare’s Much Ado About
Nothing, is a light, almost eventless romantic comedy. The heart of
Much Ado is a fundamentally misogynistic tale of deception and wronged
virtue: Claudio is suborned by Don John into believing that his betrothed,
Hero, has been untrue to him. These unhappy lovers, on their winding way back
to the altar, are accompanied by the low-comedy antics of the local
constabulary, and, most of all, by Hero’s cousin Beatrice and
Claudio’s boon companion, Benedick, whose repeated slanging matches
signal, to everyone but themselves, a deep underlying sexual tension and
romantic affection. These two have long since crowded the disquieting principal
plot, which is a story only an academic could love — as long ago as the
1630s, King Charles I titled his copy of the play Beatrice and
Benedict. Berlioz simply discards all the pesky business — gone Don
John, gone denunciations at the altar, gone Dogberry and the antics of the
police; welcome a slight and forgettable bit of new business with a
newly-devised character, the music-master Somarone (“Big Ass”). The trouble
here is that without even a hint of shadow — all Claudio and Hero do is
to egg their friends on, while the nuptials approach — there is very
little narrative drive. It does not come as much of a surprise to learn that
Berlioz planned the work as a one-act opera, and extended it; the music of the
two-act version is consistently rewarding, but dramatically almost as inert as
his Faust. Berlioz’s thinking here is orchestral, and almost
symphonic — BÈatrice et BÈnÈdict is, arguably, a symphony or
tone poem on themes from Shakespeare, with voices. As such, it is among
Berlioz’s most appealing works: the duet-nocturne that closes the first
Act, perfectly performed by Opera Boston, is arguably one of the most beautiful
episodes in all of opera. 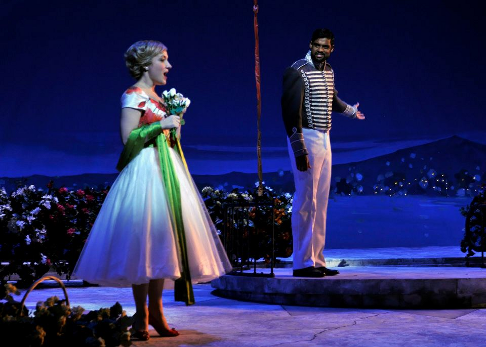 For all his superior mastery of more complex forms
and ideas, Beethoven, Berlioz’s great musical model, could only wish he
had written ten more beautiful minutes. Opera Boston, a laudable champion of
the neglected and under-heard in opera, has essayed a fluent, elegant staging
of Berlioz’s last stage work. The setting is still Sicily — or,
that sort of neverland Shakespeare always evokes in his comedies — but resituated
in a high-toned 1950s, complete with puffed skirts, bobs, and up-dos —
you almost expect a poodle-skirt to sashay in. Designer Robert
Perdziola’s set design is equally stylish — the capolavoro is
perhaps the lifting of set’s back wall, mottle-painted to suggest aging
stucco, to reveal a heart-stopping night sky and distant harbor. As Beatrice,
Julie Boulianne has a fine mezzo-soprano voice, a little hard-toned in the
upper reaches; Sean Panikkar as Benedict lacked a little polish and finish in
tone. Heather Buck’s Hero was excellent at the top and bottom of her
register, but a little elusive at times in the middle. Kelley O’Connor as
Ursule almost stole the evening, with an arresting, dark-colored low-mezzo
voice. Gil Rose’s orchestra offered a seamless and idiomatic reading of
Berlioz’s tuneful score. Director David Kneuss, a long-time advocate of
the work, decided on an odd hybridization of languages and styles — the
sung score was heard in Berlioz’s French, the dialogue in English, in an
adaptation that mixed Shakespeare, Berlioz’s own additions for the
French-language premere in 1863, and what was apparently some of Kneuss’
own work. Although the result was not as jarring as might have been feared, why
not go all the way in any one of these directions? Shakespeare, with
minimal alterations? modern English for everything? French for all? Kneuss also
did not entirely solve Berlioz’s dramaturgical problems, perhaps a
thankless task on the best of days. Principals and chorus were frequently
perfectly stationary in moments that, musically and dramatically, suggest
movement (the opening of Act I; the drinking song in Act II) — but then,
to be fair, Berlioz always had peculiar ideas about what constituted a
party. 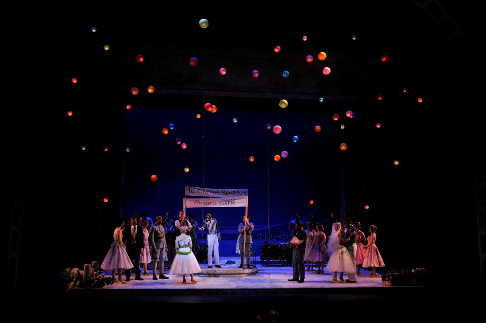 Beatrice and Benedict was not quite his last work — the
Memoirs were to follow — but is arguably his last musical work
of any importance. Like Verdi long after him, he said farewell to the stage,
and to some degree to music, with comedy — and comedy from Shakespeare,
at that. He lacked Verdi’s Boito — he had no librettist of
genius to help shape the drama, and provide a loving but stern pair of eyes to
look over the work. Why this work — and why this curious selection from
Much Ado? Shakespeare had long been both his inspiration and his
undoing; it was through Shakespeare that he found himself as a composer of
genius, and it was through Shakespeare that he met Harriet Smithson, the
English actress he loved and married. Their relationship declined into mutual
loathing and recrimination — but in this bagatelle on Shakespearean
themes, we see a merrily quarrelling couple, Beatrice and Benedict, whose
loving combat never degrades into hatred. They are Hector and Harriet, without
the depredations of age or misfortune. When it premiered, Verdi’s
Forza del Destino opened in Imperial Russia; Offenbach’s
Belle Helene was in preparation, and Meyerbeer’s Africaine was
being completed; most of all, Wagner’s Walkure had just appeared
at Bayreuth. Aesthetics very different from Berlioz’s, although perhaps
similar in ambition, had arisen; yet this last and most polished and mature
work from the pen of Berlioz deserved and deserves to be heard. Opera
Boston’s commendable production, with its polished style and fine young
singers, goes a long way toward keeping Berlioz’s music fresh and living
for contemporary audiences.