Supposedly, when the opera was performed the
following evening, the ink was still wet on the pages. 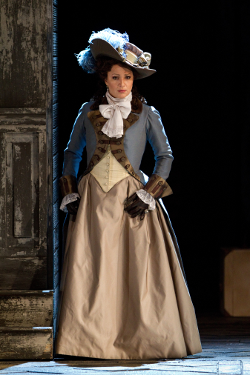 The finished product is a marvel of composition. After the opening, two
ferocious minor chords, what follows is a depiction of hell: the perfect
beginning to an opera whose full title is Don Giovanni, or The
Punished Miscreant. When the Met’s new principal conductor, Fabio Luisi,
conducted the new production of Don Giovanni on Saturday, October
22nd, he executed the beginning minor chords of the overture with startling
accuracy. However, in the following section, in which Mozart depicts hell, he
seemed a tad lackluster. Unfortunately, this was a sad harbinger of what was to
come, not just from the pit, but from the stage as well.

So what went wrong? My diagnosis is that the Met’s new production,
directed by acclaimed Broadway director Michael Grandage, fell victim to the
politics of the Peter Gelb regime. As a director who is unfamiliar to opera,
Grandage fits well into Gelb’s scheme of operatic rejuvenation, for the
purposes of demonstrating to the public that “opera is not just great music,
but great theater as well.” To be fair, Mr. Grandage’s work can be
breathtaking. A recent Broadway run of Hamlet, starring Jude Law, was a
wonderful night at the theater. Unfortunately, Mr. Grandage’s productions
function mainly as vehicles for the performers. Had Hamlet not starred
the dynamic Mr. Law, it might have come up flat. This is what happened here. 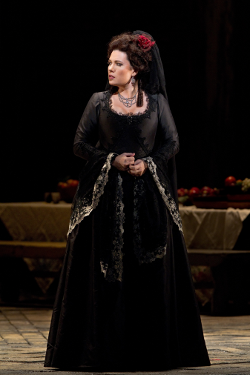 The real problem with this production, therefore, can be seen as a trick of
fate. Under normal circumstances, the title rascal would have been played by
baritone Mariusz Kwiecien and James Levine would have been in the pit. As it
happened, both Mr. Kwiecien and Mr. Levine were indisposed, so the Finnish
baritone Peter Mattei had to be pulled from The Barber of Seville
where he was singing Figaro, and Fabio Luisi stepped in, yet again at the last
minute, for Mr. Levine.

While an amazing Figaro, Mr. Mattei’s Giovanni was a caricature of the
great villain. To be sure, Don Giovanni is an opera buffa, but it is
less a bubbling comedy, like Rossini’s Barber, and more a dark
comedy with far-reaching political undertones. The oversexed nobleman of the
title is supposed to make you laugh, but each laugh is supposed to hurt.
Mattei’s Giovanni lacked the essential component of volatility that Mozart so
desperately wanted. That said, he sang well. His “Deh vieni alla finestra”
was a joy to hear, but despite the masterful singing, this aria, just like the
majority of the performance, lacked emotional substance.

As Leporello, Luca Pisaroni was magnificent. He played Giovanni’s servant
as a sardonic commentator on the action. His performance as the valet made me
hope that he would one day attempt the Don himself. Among the men, other
standouts include RamÛn Vargas, who gave a wonderfully sung and surprisingly
masterful performance as Don Ottavio. He was far from the epitome of inactivity
of other productions. Joshua Bloom gave an excellent turn as Masetto, and
ätefan Koc·n was a marvelously unstable and threatening Commendatore.

Of the three women, Mojca Erdmann was a stylish Zerlina. She certainly has
the technique to sing Mozart, however her character portrayal of the wily
peasant girl was a little flat. The highlight of her performance was “Vedrai
carino.” It showcased her ability as an actress while at the same time making
one wish the rest of her performance could have been as good. Marina Rebeka was
a thrilling Donna Anna. The highlight of her performance was “Or sai che
l’onore.” It is customary to portray Donna Anna as a strong character, only
limited by the accident of being born a woman. However, here she didn’t just
scold Don Ottavio. Had the aria been longer, she might have eaten him alive. 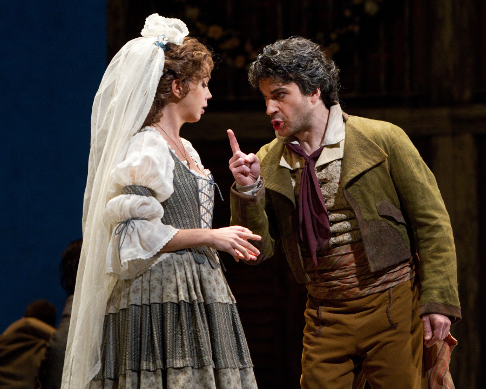 Mojca Erdmann as Zerlina and Joshua Bloom as Masetto

The crowning achievement of this performance was Barbara Frittoli. For
better or worse, she became the focal point of the opera. She took a well-known
facet of the character, her ambivalent mix of revulsion and love for Giovanni,
and explored it to the utmost degree. Unlike other Elviras, who between acts
one and two seem to magically change from loathing to adoration for the Don,
both facets of her character were present from the beginning.

Critics have maligned this production for its set, which consists of a wall
of decrepit-looking shuttered balconies. They scoff at its so-called “Advent
calendar” design. In my opinion, the design is not the flaw here. What is an
issue is the blocking. Throughout the opera, certain characters on the ground
interact with those standing on balconies. This creates an uncomfortable lack
of chemistry in an opera that is supposed to sizzle with eroticism. Yet even
when all the characters are standing together on the ground, there was
confusion in their interactions. For instance, Donna Anna was not present for
Don Ottavio’s rendition of “Il mio Tesoro.” As a consequence, Mr. Vargas
had to sing of his love for Donna Anna to everyone else but Donna Anna.

Instead, Mr. Vargas focused on Donna Elvira. While this strengthened the
idea that Elvira is engaged in a neverending search for love, this directorial
faux pas made me wonder if Elvira was really the title character of this
production. There were some instances of genius. Don Giovanni removed
Zerlina’s veil just before “La ci darem la mano.” A subconscious nod
toward his desire to take her virginity, perhaps? Also, Elvira was ravished on
the dining room table by a Giovanni who was literally blinded to fate during
his last meal on Earth. 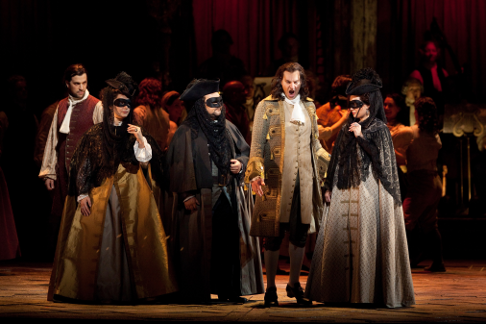 However, such inspiration was fleeting. At the end, when all the characters
sing of their need to put their lives back in order, I was left wondering,
“Was there any real threat to begin with?” The desire to reinvigorate the
public’s interest in opera with ubertheatrical productions is a noble
endeavor, but if the performance doesn’t at least acknowledge what originally
excited the composer, how can we be sure a modern day public will be
interested?