Kudos too, for having presenting the work in a production created by the
late Stephen Pimlott for the Royal Opera House and the and the Finnish National
Opera (more about this later) which, though it sparked discontent at its 2006
London premiere, introduces a new view of the tale.

Whereas Pushkin narrated his lengthy lyrical poem filled with wit, cynicism,
and psychological insights, Tchaikovsky and his librettist Konstantin
Shilovsky reduced the work to intimate scenes focused directly on their
principal characters. In both versions, however, the story is set at a time
when rank and status mattered, when women were essentially powerless. Eugene
Onegin, the eponymous protagonist (one can’t call him a hero) of the
work, is the wealthy neighbor of the widow Larina and her young daughters, Olga
and Tatiana. Onegin, who has wandered the world, lives the dissolute life of a
Byronic Don Juan, and carries himself with the aristocratic mien of Jane
Austen’s Mr. D’Arcy, is introduced to the Larin household by the
poet Lensky, in love with Olga. The three woman, attended by a nanny, live as
did Elizabeth Bennett, a modest country life. But in this story, it takes only
a glance for young Tatiana to fall in love with the elegant Onegin. The same
night, unable to sleep, overflowing with passion and impetuosity, she writes a
letter to Onegin offering him her heart.

When the two meet the next morning Onegin honorably, but coldly returns the
humiliated girl’s letter and rejects her love. Later, bored at a local
ball, he flirts with Olga and incenses Lensky to the point where the poet
challenges him to a duel Lensky is killed and Onegin returns to his aimless
wandering life. When, in Act 3 Onegin and Tatiana meet again, she is the wife
of a prince. Now it is Onegin who will write a letter and plead for love.
Tatiana first upbraids him for his past cruelty, then confesses that she still
loves him. But refusing to renounce her vows, she leaves him alone to his
despair. Is this a story of payback, as one reviewer described it? Is it about
class and caste? Is it about a country girl’s solid values, set against
the nihilism of a sybaritic life? Or does it reflect as many Pushkin scholars
believe, the battles raging within Pushkin himself? It should not be surprising
to find new interpretations of the work.

Though not a cast well-known to American opera goers, Los Angeles assembled
four stellar principals with knowledge of the language and familiarity with
their roles, which always brings a a sense of ease to a production. Baritone
Dalibor Jenis was a full voiced, if somewhat stiffly mannered Onegin, until the
last scene when rejected by Tatiana, jacketless and unkempt, he seemed to me a
maddened Don Jose. Oksana Dyka’s role as Tatiana took her in an opposite
emotional direction. In voice and manner she made the transition from love
starved teen ager to mature woman convincingly. I loved tenor Vsevolod
Grivnov’s ringing top voice as Lensky’s but sometimes I think I
love every tenor as Lensky. Mezzo-soprano Ekaterina Semenchuk sang Olga, and
Margaret Thompson, her mother, Larina with assurance and ease. There were three
young American artists in the cast. Ronnita Nicole Miller as Filipievna, the
nanny, has a rich voice wonderfully under control. James Cresswell sang Prince
Gremin’s aria with magnificent sonority and hit the low notes, but still
lacks that “innerness” that brings subtlety and shading. Keith
Jameson was a silky voiced Trinquet. 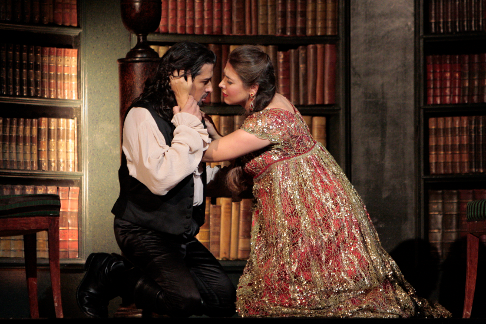 Dalibor Jenis as Onegin and Oksana Dyka as Tatiana

In the emotion-filled dramatic scenes that Tchaikovsky set, not only the
characters, but his music speak directly to our hearts. Conductor James Conlon
led the orchestra in a pulsing, radiant performance.

Pimlott’s intelligent production deserves a review of its own despite
some incomprehensible stagings: why Tatiana writes a letter bursting with
passion while bent over on the floor, I’ll never know. And why the
glittering third act “polonaise” is performed before a scrim
depicting death, remains a mystery to me. Suffice it now to say that with this
production Pimlott introduces us to Pushkin’s narrative viewpoint. Aided
by Antony McDonald’s sometimes outlandish costumes and Peter
Mumford’s always dramatic lighting, he gives us something of
Pushkin’s distant view of his characters by staging the action as though
painterly images set within a frame.

One last word about Tchaikovsky’s music. Tatiana, Lensky, Gremin and
Onegin have the four great arias of this opera. Leaving the theater, I could
recall snatches of the first three, all of which declare love, but not of
Onegin’s. His is the one about rejection.

And one other last word to thank Placido Domingo and the Opera Company for
including a touching tribute to Salvatore Licitra in its program.

All photos by Robert Millard courtesy of LA Opera