The Opera Orchestra of New York seemed to edge the shadows quite
lately, but its return to Carnegie Hall with CilËa’s fragrant Adriana
Lecouvreur was ardently welcomed by something like a sell-out crowd—and
why not? The cast, headed by Angela Gheorghiu and Jonas Kaufmann, could hardly
have been more up-to-the-moment starry. Adriana is not the obscure
sort of fare for which New York’s opera lovers have long treasured the
company, being an occasional visitor to the Met as well as to OONY in recent
seasons, but no one seemed to mind that. Even better news was the remodeled and
repeopled orchestra itself under its handsome new conductor, Alberto Veronesi,
producing CilËa’s masterful and dreamy effects all night up to the ethereal
harps that accompany the expiring Adriana to the throne of Melpomene, Muse of
Tragedy, on Mount Parnassus. They made one almost eager to hear OONY’s next
offering, Wagner’s Rienzi, on January 29th. A maestro of
Veronesi’s ability might find elegances in that bombastic work that have
previously escaped our attention.

Adriana has its bombastic moments too, but it largely sticks to
formal “Verist” manners: continuous song inspired by dialogue and
personality; the opera lacks even the audience sop of an act finale of singers
in full concerted blast. Adriana is based—it is the last successful
opera based—on a script by the indefatigable (but, by 1902, long dead)
EugËne Scribe, and like all Scribe historical farragoes, “illustrates”
historical problems by placing the feelings of characters, real or fictitious,
in the foreground with a claque of intricate skullduggery to surround it and
elicit our thrills and chills of sympathy—the technique of
“historicality” bequeathed by Scribe to Hollywood. In Adriana, the
great actress, in love with a mere officer, learns that he is actually Maurice
de Saxe, son of the king of Poland, eventually a marshal of France, and
aspirant to the throne of Courland. (Where? Latvia. Same as Latvia. Roughly.
But don’t worry; the whole show takes place in Paris.) Maurizio (as he is
here) has concealed his identity because, for political reasons (Courland
again), he has been courting the passionate wife of the mighty Prince de
Bouillon. The Prince never suspects Maurizio is his wife’s lover, but he does
suspect the gallant officer of seducing his mistress. That would call
for a duel. Add a lot of complications in a darkened room by two desperate
women who must not see each other’s faces, and a nastily-wielded speech from
Racine, and a bunch of poisoned violets. In life, Maurice and Adrienne had a
child, whose great-granddaughter was George Sand, a pal of Scribe’s. And
Maurice never did get Courland. Never mind. 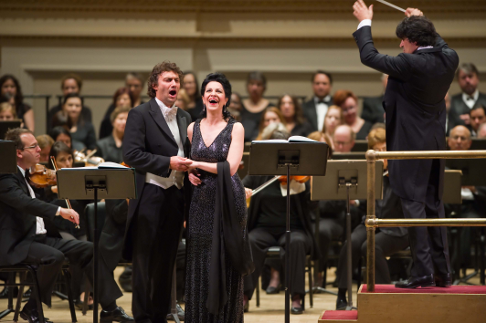 Angela Gheorghiu has a lovely voice but her choice of repertory and the way
she uses the instrument have seldom delighted me. On this occasion, while her
diva mannerisms no doubt recalled the old days to those who missed them (in
either sense), she was for me the least satisfying singer. This may be a case
of being too busy studying the notes to bother with the story. Adrienne
Lecouvreur was the queen of the ComÈdie FranÁaise because she brought
naturalism, or what passed for naturalism in 1730, to a stage frozen in the
affectations of “high art.” This is the message of Adriana’s entrance
aria, “Io son l’umile ancella,” when, in response to her colleagues’
applause, she assures them she merely inhabits the text as it has been written.
Obviously, a great actress does much more than that and a great singer should
present the aria as naturalism on her own particular terms—but it must be
natural on some terms. Gheorghiu can be many things on
stage—pathetic, passionate, sexy, tragic, outraged, outrageous—but she is
never natural. That’s all right as long as you sing “Io son l’umile
ancella” in a natural fashion, its strophes considered, its raptures and
confidences part of a whole (the way Mirella Freni sang it—got that?), but
Gheorghiu isolated the phrases into separate Post-It notes on her performing
style, never joining them into a whole and demolishing CilËa’s loveliest
melody. Maestro Veronesi followed her devotedly: A star is a star. A friend
suggested that he wasn’t conducting the orchestra at all—Gheorghiu was
doing it herself with all those tossings and flutterings of her elegant
gown.

After a costume change in the interval—divas rule!—Gheorghiu seemed more
prepared to sink into the score (which she recently performed in a full staging
at Covent Garden). The spoken tirade from Racine’s Phaedra
in Act III was, to these ears, her finest vocal moment although one might cavil
that it isn’t exactly sung. Her “Poveri fiori,” if once again wayward in
tempo, took us closer to the character than anything else all night.

Jonas Kaufmann is not the ideal Latin tenor lover (one reason his Alfredo at
the Met was predictably disappointing), but he has such advantages, such a
robust, attractive baritonal color to his voice with a seemingly effortless
reach to the top, such musicality, such charisma, such devotion to creating his
part (which meant here that he had to convince two jealous women of his
unflawed fidelity—no trouble for Kaufmann—we all wanted to believe
he was in love with us, and it’s easy to believe what you want to believe
when it’s sung like that), that I was as starry-eyed as the rest of
the house. When I say he lacks “Latinity,” I mean that when he does go for
emotional high points, declaring his love or recounting a bold military
exploit, though the phrases ring, he does not sound ready to die to take that
redoubt, I mean high note. That is the effect of the ideal Verismo
tenor. Kaufmann is German: brainless testosterone is just an act for him. 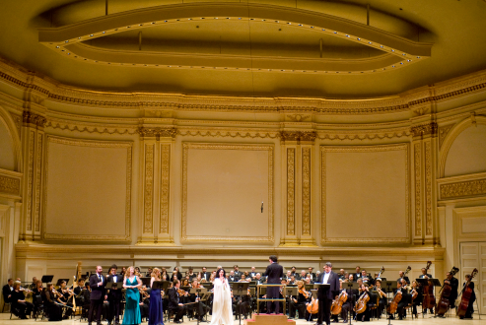 Anita Rachvelishvili has been singing Carmen to acclaim all over the world,
and she did not seem to have renounced the street Gypsy when singing the
jealous Principessa here. She seems a very young singer, but the Principessa
(unlike so many of her interpreters) is not old; she is a disappointed young
woman trapped in a marriage to a noble rouÈ; Maurizio has waked a smoldering
volcano. Rachvelishvili has a deep, smoky sound with a vibrato that can be
thrillingly suggestive or vaguely spooky and wide of pitch. Her Principessa was
full of sass. I wonder what her Dalila might be like?

Ambrogio Maestri, resembling a thick-lipped, sentimental concierge in a
romantic farce, brought a far more impressive sound to Michonnet, Adriana’s
hopeful manager, than the lovesick fellow usually gets. The smaller roles were
cast appealingly, especially Nicola Pamio’s mincing abbÈ and the four
twirling actors who cheer Adriana on her birthday. The orchestra sounded
reborn, revivified, ready for anything. I hope that means they will take on
many scores they have not played for us before—there’s a lot of terrific
bel canto that’s just coming to light. Or if they stick to encoring previous
O.O.N.Y. successes, may one suggest Robert le Diable? Nerone?
Poliuto? Beatrice di Tenda? I missed them last time through,
and they’re certainly worth more than one glance. Or Bizet’s Ivan
IV. Or Mercadante’s Virginia. Or Gomes’ Maria Tudor
or Il Guarany. Or….