The sad corollary has been a feeling that the more heroic tenor sound — often called “spinto” — has gone lacking for fresh talent. Rolando Villazon tried to move from the light roles into the heavier, and a vocal crisis ensued. And just recently we lost to a tragic accident Salvatore Licitra, who a few years ago had seemed poised to attain true stardom in spinto roles.
Now comes Jonas Kaufmann, German by birth, and in his early 40s. He established himself on European stages and has gone on to make some notable appearances in the U.S. His is a strong, masculine sound, as handsome as the man himself. The vocal colors include deeper hues, as with Placido Domingo, but his top seems to be more reliable than Domingo’s often was. So far the greatest acclaim has come to Kaufman in Wagner, but he is by no means limiting himself to Lohengrin and Siegmund. His Don JosÈ for Covent Garden made it to DVD, and now Decca has released a Werther from Paris in 2010 and a 2009 Z¸rich Tosca with Kaufmann’s Cavaradossi. Both DVDs put on display a confident, poised tenor whose stardom obviously stems from a lot more than his good looks. For some he may never be a true spinto in Italian repertory, due to his nationality, but then those same fans (or their “ancestors”) felt the same about Jussi Bjorling. His is a different type of voice, larger and darker, but Kaufmann probably has no qualms in following the great Swedish tenor’s path. 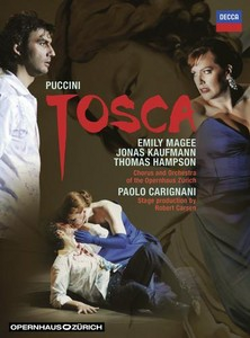 Film director BenoÓt Jacquot’s Werther staging for Paris (although initially presented at Covent Garden) leaves wide open spaces for Kaufmann to fill with his stage presence, which the tenor has no problem doing. The set for the first half vaguely resembles a strand near a seashore on an overcast day, while the second half is staged in a vast study, dark and masculine in appearance. Director Jacquot uses these simple surroundings as platforms for emotional interaction, rather than symbolic display. Unfortunately, Jacquot, working with Louise Narboni, indulges in some odd camera angles as a video director, and he also makes use of backstage footage in a gambit that proves initially interesting but ultimately annoying.
Massenet’s opera respects the Goethe source material almost too much, as two hours with a dreary emotional wreck amounts to around 119 minutes more than most people would want to spend, even with such gorgeous music. Kaufmann’s Werther shines in his opening paean to nature, the character’s only few minutes in the opera not spent being a moody, lovesick drip. Even more impressive, though, is Kaufmann’s ability to draw the audience into Werther’s plight, so that the intolerable self-pity is muted by a sense of larger social forces oppressing the anti-hero. A big part of Kaufmann’s success lies with the sheer power and authority of his voice. There is no resorting to sobs or ostentatious drooping of the vocal line. Kaufmann lets the inherent pathos of Massenet’s score fill out the emotional picture.
As the object of Werther’s passion, Sophie Koch plays too much to Charlotte’s modest beauty, both in demeanor and voice — there must be some passion there to make us understand the depth of Werther’s attraction. Ludovic Tezier, on the other hand, is almost aggressively bland and prosaic as Albert, the man Charlotte must marry to fulfill a promise she had made. The veteran conductor Michel Plasson and the Paris musicians unfurl gorgeous swaths of color and texture in Massenet’s score. Decca’s two disc set has no bonus feature, though the booklet does have more original material than the usual DVD set booklet offers these days.
Robert Carsen’s Tosca for Z¸rich would make the NY audiences that bayed at Luc Bondy’s production for the Metropolitan howl and foam as if rabid. Carsen sees Puccini’s take on the Sardou play as anticipating the glory years of the American film studios, so the sets and costumes (by Anthony Ward) play upon the libretto’s settings to create a sort of mock film set, and at times a stage proscenium. Most of it works quite well, as Tosca and Scarpia are both inherently theatrical creatures, and Kaufmann’s Cavaradossi is more in line with the strong, though not so silent, type of leading man. A couple of bolder touches will not work well for all viewers — whether it’s having Cavardossi’s Madonna painting appear in Scarpia’s office during act two or having Scarpia attack it with a knife. Your reviewer got a big kick out of Tosca’s fatal leap taking place over the footlights at the edge of a stage, topped with Emily Magee taking her solo call in character. Others may not be amused. But the test of any Tosca is if it can find the emotional truth of the drama while breaking through the calcified stage directions that make the drama too clichÈd to make any impact, and Carsen does so, with the invaluable assistance of his excellent leads.
Vocally, Kaufmann takes the prize. His solo pieces are gorgeous, and he can roar out a “Vittoria” with the best of them. Magee’s Tosca is best in the dramatic exchanges. Her large voice grows gritty and unpleasant in extended lines, and though Carsen has Thomas Hampson’s Scarpia applaud Magee’s “Vissi d’arte,” his sarcastic look is unfortunately understandable. Hampson’s take on Scarpia has freshness and edge, but it seems unlikely he will take on this role at any of the larger American houses. By the middle of act two, hoarseness scratches at the edge of his voice. Taken together, though, all three leads are successful enough to make this a very worthy competitor in the very crowded field of Tosca on DVD.
An unfamiliar name, conductor Paolo Carignani treats the score to a fresh approach, with expansive pacing and an expert selection of orchestral detail. The Z¸rich forces follow his lead beautifully. Decca’s single disc set has a basic essay and synopsis in the booklet and no on-disc bonus features.
Kaufmann will be in huge demand for years to come, and US audiences will have to wait their turn for his future appearances here. With two fine DVDs such as these, at least we have something of the tenor’s to watch while we wait.
Chris Mullins