Malfitano’s staging makes a
refreshing change both from the likes of the floundering first-time spoken
theatre and film directors often recently engaged by the company, and from the
ludicrous, dramatically-null vulgarity of the Zeffirelli brigade. It doubtless
helps to have someone at the directorial helm who knows the work from the
inside, having sung the title-role a good many times herself. There is nothing
here — with the possible exception of the third act — to frighten
self-appointed ‘traditionalists’, although in such repertoire and with
respect the audiences it tends to attract, I cannot help but wish that someone
would occasionally shock the horses. (Just imagine what Calixto Bieito might
make of Tosca!) Despite the sometimes bizarre specificity of the
libretto, there seems to me no reason why intelligent relocation or abstraction
could not work: the opera is not in any meaningful sense ‘about’ the
experience of the French Revolution in Rome. Malfitano, however, elects
successfully to retain the settings and for the most part the attitudes of the
work’s creators, respecting as do they the classical unities.

The first act is therefore set in S.Andrea della Valle at noon, convincingly
represented in realistic fashion by Frank Philipp Schlˆssmann’s designs. The
force of Cavaradossi’s painting registers straightforwardly, but none the
worse for that. One strongly feels the menace of the Church as pillar of the
(re-)established order at the entrance of clergy and acolytes for the “Te
Deum”. (I cannot help but find the anti-clericalism shallow, verging on the
puerile, but that is no fault of the production.) Likewise, the second act is
set at evening in Scarpia’s quarters in the Palazzo Farnese, furnished as one
might expect, though without excess. The third act therefore comes as a bit of
a surprise, at least in terms of designs . Doubtless taking as its cue
references in words and stage directions to the stars, perhaps even those to
the saints in heaven, we see the skies as if from a space ship, though
something akin to the battlements is still present. It did not bother me in the
slightest, though nor, by the same token, did I find the image revelatory.
Throughout, Malfitano’s direction of the characters on stage proves quietly
accomplished, providing neither mishaps nor particular flashes of revelation. I
do not mean to imply that it is dull, for it is not, but nor does this in any
sense approach reinterpretation, for which many will doubtless be relieved. If
I found the final melodrama as difficult to take as ever, a
not-entirely-fitting conclusion to so well-crafted a score, then clearly I am
in the minority; rightly or wrongly, it receives faithful treatment here.

Stephen Lord’s conducting was impressive. Lord is not a conductor I have
previously heard, but I should certainly be interested to do so again. Despite
the occasional instance of perhaps driving the score a little hard, the full
yet variegated sound conjured from the orchestra was as fine as I have heard at
the Coliseum for quite some time. Alert to Puccini’s Wagnerisms without
overplaying them, there was a fine continuity to Lord’s traversal of the
score, which here in both harmony and orchestration at times sounded, to its
great benefit, appreciably more modernistic than one often hears. It was not
for nothing that both Schoenberg and Berg were admirers. Even Mahler, in his
scathing description of a Meistermachwerk, acknowledged the skill of
orchestration — an undoubted advance upon so many of Puccini’s Italian
forebears — though added that any cobbler nowadays could merely
‘orchestrate to perfection’. 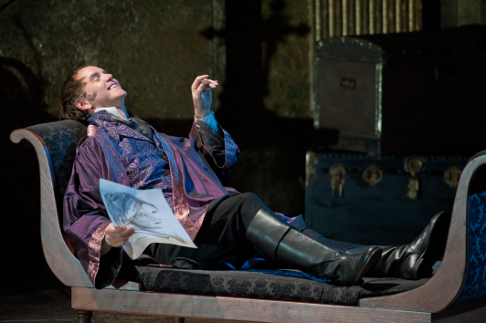 If the singing did not truly scaled the heights, it was professionally
despatched. No one is going to replicate Callas, and Claire Rutter wisely did
not attempt to try: hers was an intelligent enough stage portrayal, a little
lacking in charisma perhaps, likewise in creation of the diva-status of Floria
Tosca as singer, but, despite occasional weakness in sustaining her line, there
was nothing grievous to worry about. Gwyn Hughes-Jones’s Cavaradossi was not
entirely free of crooning tendencies, nor did it revel in subtleties, but it
was well enough sung, and would doubtless have sounded better in Italian.
Anthony Michaels-Moore seemed to experience vocal difficulties in the first act
but his Scarpia sharpened up in the second, albeit without ever quite capturing
the sheer danger and malevolence of the most notable interpreters. The smaller
parts were all well taken. Choral singing, not always the strongest point
recently at the Coliseum, was similarly accomplished.