These qualities were affectingly demonstrated during this wonderfully
tender performance by Florilegum of secular instrumental and sacred vocal
music, compositions which unite the best of contemporary French and Italian
conventions.

Couperin was born in 1688 in Paris, the son of Charles Couperin, the
organist St Gervais in Paris. On his father’s premature death, the
organist position passed to Lalande, but FranÁois, an early musical genius, was
already deputising for Lalande at the age of ten, and on his 18th birthday he
officially inherited his father’s previous position. Lalande praised the young
man’s innovative 1690 collection of PiËces d’orgue as
“worthy of being given to the public” and helped to establish him
as a Court organist in 1693. In 1700 Couperin acquired the younger
D’Anglebert’s position as harpsichordist at Versailles.

He amassed a notable quantity of superlative harpsichord pieces, which began
appearing in elegantly engraved editions in 1713, following other noteworthy
collections by Rameau and Dandrieu; but, ever the individualist, Couperin chose
to group his piËces into ordres rather than suites, and relied much less on
dance movements than his contemporaries, preferring the freer and more
evocative piËces de caractËre.

In his publications of the early 1720s he offered a wide variety of ways in
which the French and Italian styles might be united. As Richard Langham
Smith’s eloquent, informative programme notes state, the works grouped
under the title of Les Nations were “written in the style of
Corelli”; the composer had been “charmed by the sonatas of Corelli,
whose works I shall love as long as I shall live, just as I do the works of
Monsieur de Lully”.

In the slower, more intricate movements, as in the ‘Sarabande’
of L’Espagnole, the meticulous attention to ornament and detail
was impressive, although such details were never allowed to disrupt the
graceful melodic line. String and woodwind articulation in the more energetic
dances was bracingly crisp and fresh; repetitions were constantly
re-invigorated. Rapid passage work in ‘La Gigue’ from La
FranÁoise was sharply articulated. Despite the fact that these
interpretations were clearly honed to perfection, there was a surprising sense
of spontaneity, as if the reading was unfolding in real time. 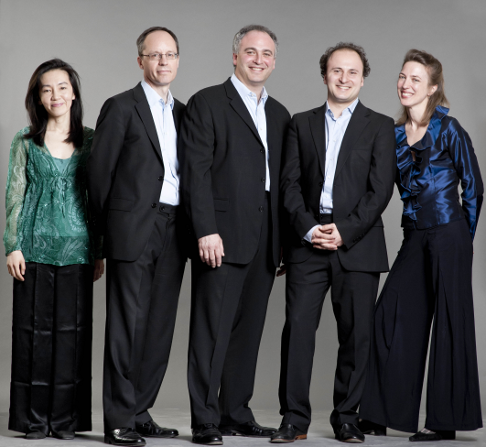 The instrumentalists were joined by sopranos Dame Emma Kirkby and Elin
Manahan Thomas in Couperin’s captivating LeÁons de TÈnËbres, extremely
beautiful and genuinely spiritual music for ecclesiastical use. Couperin’s
interest in the Italian style, as represented by Carissimi and Charpentier,
influenced his sacred vocal music, particularly his motets, versets and leÁons
de tÈnËbres, and the result of this stylistic diffusion is enchantingly
presented in the LeÁons.

In the Tenebrae service, psalms are sung, interspersed with the
text from the Lamentations of Jeremiah. In Couperin’s setting we
are aware of delicate and deliberate crafting: each of the responsaries is
preceded by a huge musical ‘capital letter’ much like the way the
first letter of a Hebrew psalm is set to a long melisma – as Langham
Smith describes “a musical equivalent to an ornamented manuscript with
elaborately gilded capital letters.”

The two soloists brought their own strengths to the delivery of the text.
Thomas, alert and energised, using the voice to thrill and excite; Kirkby
effortlessly shaped individual phrases into affecting larger units, creating
heart-rending melodic shapes and inflecting the text with human sentiment.
Soaring melodic arches and effortlessly gilded ornaments evoked cathedral
realms. For Kirkby aficionados, vocal purity and beauty is taken for granted,
but she also exhibited a real sense of the architectural splendour of these
pieces.

Thomas’s pronunciation of the Latin text was idiomatically French in
inflection, as it would have been performed at the time. Her ornamentation was
superb; she produced a shimmering beauty which invigorated the sacred text with
exotic nuance. In the third lesson, the intertwined soaring voices evoked
aspiring gothic cathedral arches. The accompaniment was flexible and alert,
sensitive to nuance and creating a real sense of intimacy. The repeated
refrain, “Jerusalem, Jerusalem, convertere ad Dominium Deum tuum”,
(Jerusalem, return thee to the Lord, thy God) both united the various lessons,
and provided variety and gradation.

These are pieces of heavenly exquisiteness, designed to inspire piety
through their sheer beauty. Whatever one’s religious allegiances and
affiliations, this recital inspired ‘devotion’ through the
performers’ absolute commitment to magnificent splendour and nuanced,
expressive inflection, perfectly assimilating the sacred and the secular.