ICA Classics appears to be a label dedicated to in-house tapes of live
Covent Garden performances of the mid-to-late Fifties. Of the three sets
reviewed here, all share constricted audio that mutes the orchestra but gives
voices — at least the stronger ones — satisfactory prominence. Tape hiss,
while audible, will not bother any but the most sensitive after a short period
of adjustment. The question becomes then — how many “carats” can be
ascribed for these nuggets from one of opera’s supposed Golden Ages? 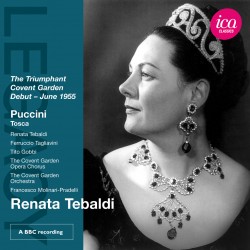 The most fun comes with the 1960 Il Barbiere di Siviglia, with
conductor Carlo Maria Giulini leading a tastefully raucous performance. The
audience takes longer than the singers to warm up, by the time act one
concludes, the stage action has broken through any stereotypical British
reserve, and the extended bouts of laughter will make most any listener
impatient to know what was happening on stage. Rolando Panerai sings a
youthful, confident Figaro, but most of the laughter seems centered around the
Bartolo of Fernando Corena. Luigi Alva offers a stylish Conte d’Almaviva, and
for some of us, it’s nice to end this opera without the extended aria Rossini
cut and later used in Cenerentola. Juan Diego Florez fires up standing ovations
with this piece when he takes on the role, but it is narratively redundant and
shifts the focus away from what should be an ensemble finale. Teresa Berganza
made Rosina a specialty. There is much evidence here of the special quality she
brought to the role — feminine and feisty — but either the stage action
placed her further from the source microphone or the quality of her voice was
not as susceptible to off-stage miking. Her vocal effect is dimmed by a
recessed quality.

A couple of years before that 1960 performance Maria Callas made a notable
appearance as Violetta in Verdi’s La Traviata. Although still in her
mid-30s, 1958 finds Callas in variable voice. The middle still has warmth and
agility, but the top is awkwardly approached and often unpleasant, although
Callas holds onto high notes as if hoping the quality will improve through
sheer determination. Act three comes off best, as she doesn’t have to extend
upwards as much. Then again, it may have been an off-night for everyone. The
stylish light tenor Cesare Valletti starts off “Un di felice” as if unsure
of the key, and then seems to struggle with conductor Nicola Rescigno over
tempo. He improves as the night progresses, but this is probably not a
performance he would have wanted a permanent record of. Mario Zanasi is a
competent Germont, not much more. This is a document for Callas-philes. 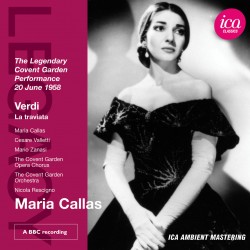 And for those still adhering to a supposed “Callas vs. Tebaldi” fan
feud, the 1955 Tosca finds Tebaldi in glorious voice. Although the
great soprano tends to let the sheer beauty and size of her voice carry much of
the characterization, she does offer some moments of personal insight,
including a spookily whispered repetition of “Mori!” at Scarpia’s death,
and a sudden scream as her own final leap. For Cavaradossi Ferruccio Tagliavini
pushes his voice forward, perhaps to match Tebaldi. While retaining his
individual sound, Tagliavini stays at one emotional pitch, even in his act
three showpiece. The biggest and saddest surprise is the Scarpia of Tito Gobbi.
This is a role with which he will forever be identified, but as recorded here,
he sounds dry all night, shouting for effect. One grows eager for Tosca to get
her revenge. Conductor Franceso Molinari-Pradelli supports Puccini and the
singers well, including a soprano “boy shepherd” in act three who sounds
exactly like a mature soprano.

ICA Classics provides a brief booklet note that gives some basic details
about the run of performances from which the recordings are drawn.
Unsurprisingly, those commentators find each performance to be a long-lost gem.
At budget price, there’s not much risk for the curious fan who would like to
close his or her eyes, hop in an imaginary time machine and imagine themselves
in London for these performances. Of the three, only the Barbiere gets
a recommendation here.