The eight doors confronting us at curtain rise (nine with the huge floating door upstage, but who’s counting?) were somehow intended to help visualize Auber’s ground-breaking Granddaddy of All Grand Opera. Not that scenic artists Carmine Maringola and Vanessa Sannino completely fail in their intentions, it was just a frustratingly unspecific start with a structurally muddled playing space for a piece that calls for such highly detailed Neapolitan locales and effects as, well, the eruption of Mount Vesuvius to name but one.
While the individual door wagons were rolled around by (almost) unseen supers, they seemed to be choreographed more for intentional distraction than coherent dramatic purpose. What the heck was that door doing on the fishing docks, for one thing? And why did the leading tenor and bass jump on the unit and get spun around by the extras at duet’s end?
Otherwise, the use of rippling drapes to suggest the balmy atmosphere of the seaside provided an apt environment (at least until that errant door intruded stage left). That said, the veiled opening of the act with the half-dressed male extras cavorting about rather intimately behind the gauze had just a hint of ‘Twink Night at the Continental Baths’ about it. But there was also effective use of an enormous red banner that flies in, becoming not only the backdrop for the church wedding’s suspended crucifix, but continuing to unfurl, creating a red carpet running from far up- to far down-stage. Much is made of such imagery: the fisherman drag and perform synchronized gathering and unrolling of oversize nets; they cast and re-coil nautical ropes; and they deploy an incredibly long wedding veil to create a series of canopies through which the titular heroine darted to and fro rather madly.
There was a commendably consistent train of creative thought at work here that more often than not rang true. Or true enough. I have to say that the re-appearance of the eight rolling doors in the palace scene, now re-dressed and tufted with red velvet, made us roll our eyes with an “oh-that-again” sense of resignation. Although I quite liked the addition of the well known paintings of Spanish royalty which flew in to frame the action. And since confession is good for the soul, when the poor mute swathed herself in the bolt of copious red carpet as she graphically communicated the tale of her abduction I did fleetingly, churlishly try to work out some witticism around “The Drape of the Sabine Women.”
The only utter miscalculation of the setting was the finale in which the heroine is meant to commit suicide by hurling herself into the erupting volcano. Or second best concept, into a lava flow. Third best, I nominate a Senta-like suicide into the Mediterranean. But the production team was having none of this and instead the girl mounted stairs (so far so good) and then disappeared behind a drape. When it lifts, she is revealed in stasis decked out as a primitive Virgin Mary of the gaudy simplicity reserved for South American folk museums. Hard to conjure up any subtext that would suggest any eruption, literal, figurative, or even absurd. It just didn’t play. 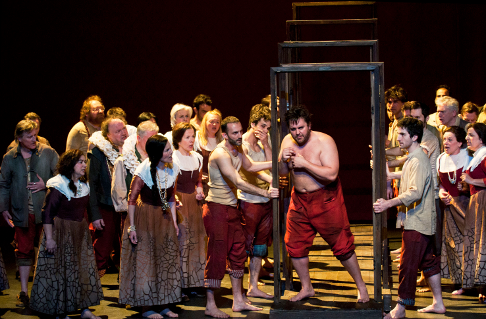 Ms. Sannino’s variable costumes were all over the map, excepting perhaps Portici. The men were rather generic peasants, everyone barefoot. The ladies later followed suit, but began the show in period hoop skirts with peek-a-boo draping revealing the hoop frame as well as legs in brightly colored tights. Then there were the curious life-sized Spanish lady porcelain dolls-on-wheels, each of whom, instead of legs, have a miniature Spanish male royal seated on a throne under her skirts (make up your own comment). The principals were rather more traditional nobility in richly detailed costumes. Lighting designer Dominique Bruguiere has created some decent effects, but should be cautioned to always ensure we see the leading singers’ faces.
Easily, the star performance of the night was from actress-dancer Elena Borgogni as a febrile, feline, coiled spring of a mute Fenella. From the moment we entered the auditorium she was prowling the apron of the stage like a caged animal. Her indefatigable energy and focused intensity were palpable every second she was in view. Her re-living of the abduction was raw and highly affecting. I cannot imagine a finer impersonation. ‘Electric’ and ‘mesmerizing’ seem to fall short in describing her accomplishment.
Eglise Gutierrez arguably brought the biggest reputation to the production, having sung major roles at respectable houses. On my first encounter with her, I found the voice to be veiled, somewhat restricted, and without much presence in the lower reaches. Coloratura in the upper third of the instrument made its mark, but it got smudgy as the line descended. But while she started off with limited vocal color, she was nonetheless a vibrant star presence. Her medium-sized lirico-spinto freed up substantially as the evening progressed and by Act Four Ms. Gutierrez was firing on all cylinders turning in a personalized and truly moving account of her aria.
Maxim Mironov was a perfectly decent Alphonse, his pleasing slender tenor showing off a sound technique and encompassing the role’s requirements with ease and acumen. Laurent Alvaro was a menacing, compelling Pietro, his ripe dark bass-baritone ricocheting through the house. In fact, at first I thought he might be over-singing until I realized that down stage left is an acoustic “hot spot” with everyone sounding almost ‘amplified’ from there. Mr. Alvaro sang with full-throated abandon when needed, but also with sensitive musicality and nuanced phrasing. 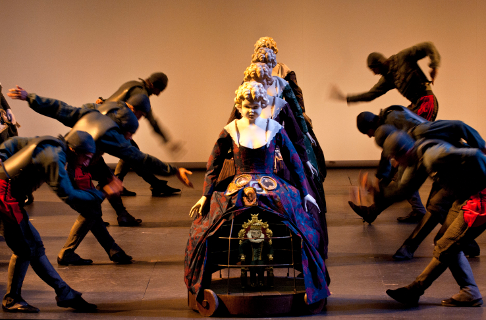 Rising star tenor Michael Spyres finally came on stage in Two and immediately elevated the entire performance by a notch (or two or three). First, he ‘gets’ French style and is as good at it as anyone currently in the business. And then there is the beauty and richness of his substantial lyric tenor itself. He has the high-flying top notes to be sure, but a real glory of his singing to me is the robust presence of his lower register and his accomplished presentation of the parlando phrases. Mr. Spyres seemed to be pacing himself in the sustained upper reaches at times, but the voice is freely and clearly produced in all registers and at all volumes. His extended aria featured some exquisite ‘piano’ passages although he is still finding his way through (just) a few less steady moments. Time and experience will even all that out. Michael is young, he is talented, and he is making a serious case for ownership of this repertoire.
In smaller roles, the house cast them from strength with Tomislav Lavoie intoning a solid Borella, Jean Teitgen contributing a memorable and characterful Selva, and Martial Defontaine showing off a substantial baritone as Lorenzo.
Stage Director Emma Dante produced mixed results, meandering through undefined scenes one minute and knocking our socks off the next. In general the interaction of the principals was woefully underdeveloped with much sung straight forward, and the singing chorus was often too unengaged, or in the case of the opening chorus, not even on stage! But then there was the highly detailed, meticulous direction of Fenella. And the often thrilling incorporation of the corps of male dancer-actors-extras that, when they were good, were truly great. 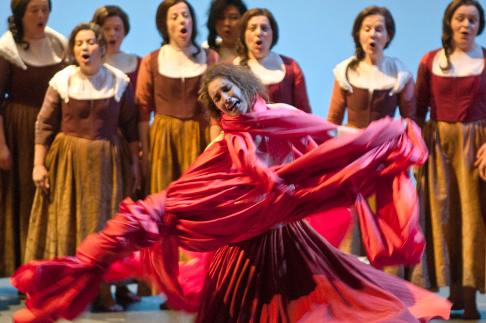 Indeed, the character-based, non-balletic dance staging by Sandro Maria Campagna was one of the most consistently exciting production elements. Eschewing the traditional classical ballet approach, the assembled group of men were earthy, primordial, and threatening. Their group dynamic informed the entire show, and provided a brutal provocation to goad Fenella’s neurotic terpsichorean outbursts. The quasi-folk steps the boys execute are athletic and passionate. And in a stunning visual coup, as the battle ensues in Act Three, these men, violently wounded, brutally killed fell to the floor, shucked their clothes and twitched like Bonnie and Clyde being riddled with bullets until they lay stone dead. This imagery of the shedding of earthy trappings and ultimate repose was not something I will soon forget.
Ms. Dante capitalizes further on this moment by having the abused Fenella pass through the killing field and shut the unseeing eyes of the corpses who are now unable to harm her further, as the chorus intones the melting a capella prayer. I urge our director to infuse the rest of the proceedings with this same intense, clear-headed vision. Moreover, I dearly wish the entire team could imbue the piece with a truer sense of time and place that Auber deserves.
For his part, Patrick Devan conducted at first with commendable precision and efficiency if little give and take. But he soon became more involved and accommodating, eliciting ever more detailed and expansive playing from the pit. The responsive orchestra and full-throated chorus were from Brussels’ Theatre Royal de La Monnaie who co-produced.
La Muette de Portici, with its populist sentiments, of course literally sparked a revolution when it premiered in the Belgian capital. I am not sure the current embodiment may have the same effect, In fact, perhaps Auber’s greatest accomplishment was having inspired everything (better) that followed. My one and only other experience with the piece was an enjoyable enough outing in Wiesbaden, Germany in the early 1980’s. I have come to think that seeing “La Muette de Portici” every thirty years is, well, quite enough.
James Sohre