As such, it is no wonder that it has yielded some of
Germany’s most seminal and controversial stagings of the past decade. The
late Christoph Schlingensief brought giant, rotting bunnies to Bayreuth in
2004, the original stage to which Wagner consecrated the work in
1882—leaving New Yorker critic Alex Ross “ready to
hurl,” as he so candidly put it—while Stefan Herheim’s 2008
deconstructionist production for the ‘Green Hill’ becomes an allegory
for German history, traveling through the world wars of the twentieth century
and into the bureaucratic Federal Republic of Bonn.

Philipp Stötzl, in his new staging for the Deutsche Oper (seen at its
premiere on October 21), has opted for a more conventional yet equally radical
concept that foregrounds explicitly Christian imagery. The director, who worked
in film before making several successful forays into opera, casts the story as
a series of tableaux vivants set in a rocky mountainous region that
could easily be Nazareth (sets co-designed with Conrad Moritz Reinhardt). The
curtains open during the overture to a realist portrait of Jesus on the cross,
surrounded by nomads and a Roman soldier. Self-flogging and fake blood abound
as the procession continues, with Amfortas carrying his own cross in the final
scene.

In a genius stroke that counters the lengthy nature of the opening act,
Gurnemanz’s narrations about Amfortas’ seduction by Kundry and the
Last Supper are depicted on the rocks in flashbacks. Parsifal, appearing in a
modern black suit and tie, descends upon the scene as if walking across a film
set, an effect which is accentuated by conspicuous fluorescent lighting on all
sides (Ulrich Niepel). Klingsor’s magic garden is fashioned as a Mayan
cave of sorts, with Native American-inspired garb for the warlock and semi-nude
floral get-ups for the flower maidens (costumes by Kathi Maurer), while the
final act returns to a rocky, post-apocalyptic no man’s last featuring
modern-day dress and a single streetlamp under which Parsifal is anointed by a
blindly fervent crowd. 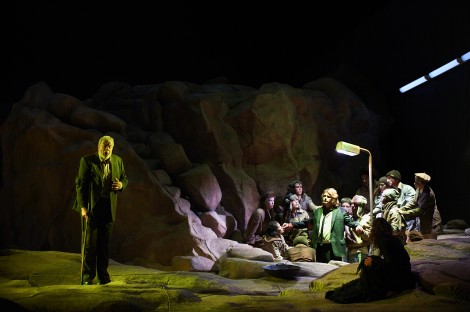 Stötzl’s episodes were for the most part expertly coordinated with
the music, such as when Parsifal lunges his spear toward Amfortas’ wound,
only to have the ruler grab it in an act of suicide (a gesture borrowed from
Schlingensief). The director’s still lives, at their best, served to
illustrate Wagner’s proto-cinematic qualities (theories point to the
composer’s use of Leitmotifs and underscoring, techniques which
were picked up by Hollywood starting in the silent film era, as well as the
darkened theatre and continental seating in Bayreuth). The surging
Liebesmahl (love feast) motif of the overture against the crucifixion
scene captured the essence of Wagner’s spirit, a cry for redemption and a
manic belief in the power of art to transform the senses.

Other scenes, such as the slow-moving mass of bodies wielding swords in the
orchestral postlude of the final act, were nearly comical in their kitsch
factor. The final act proved most perplexing in its chronological jump and
aesthetic abstraction, failing to fully explain Parsifal’s anachronistic
presence in the rest of the opera. It was also not clear whether the
reverential raising of hands toward the grail in the final scene, including the
shaking and collapsing of a man in zeal, was meant to be tongue-in-cheek. If
Stötzl hoped to include an element of social critique, it was lost in the
religious pageant. 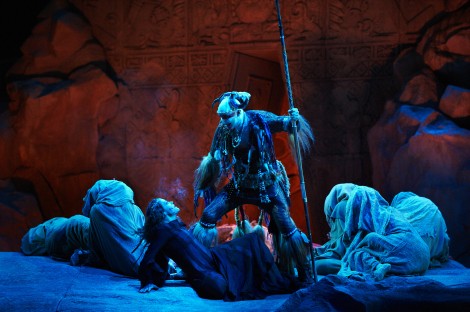 Evelyn Herlitzius, as Kundry and Thomas Jesatko as Klingsor with dancers

Nonetheless, his characters emerged in immediately human strokes. Klaus
Florian Vogt, slowly overtaking Jonas Kaufmann as today’s most coveted
Wagnerian tenor, conveyed Parsifal’s selfless naiveté with clarion
tones and an unforced thespian presence. Although his high lying timbre may not
conform to the vision of many seasoned Wagnerians, his sharp musicianship and
natural appeal surely compensate. The baritone Thomas Johannes Mayer gave a
wrenching delivery in the role of Amfortas, evoking his existential struggle
without chewing the scenery and phrasing with great sensitivity.

The dark voice of veteran bass Matti Saliminen may have developed a slightly
gravely quality, but he was unquestionably authoritative as the knight
Gurnemanz, winning thunderous applause. Evelyn Herlitzius incarnated the
wandering heathen Kundry with seductive tones, grounding large melodic leaps
with a burnished low range. She was in particularly fine voice for her
narrative to Parsifal, “Ich sah das Kind,” about seeing him as a baby
in his mother’s arms. The bass Albert Pesendorfer was rich voiced and
commanding as Amfortas’ father Titurel, and Thomas Jesatko a magnetic
Klingsor. Comprimario roles were strongly cast, with Burkhard Ulrich and Tobias
Kehrer standing out as the First and Second Knights of the Grail. The chorus of
the Deutsche Oper brought a characteristic blend of elegant lyricism and
homogeneity of tone. 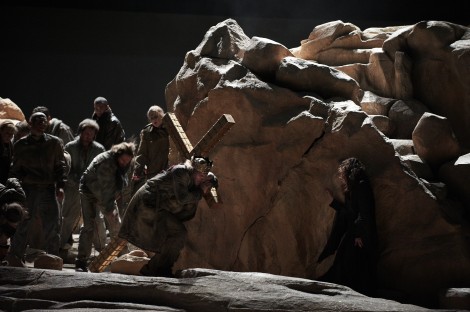 Thomas J. Mayer as Amfortas and Evelyn Herlitzius as Kundry with chorus

Donald Runnicles, now entering his fourth season as music director of the
Deutsche Oper, led the orchestra in a smooth, strong-willed reading that did
not always brim with tremendous pathos but did full justice to the soaring
lines of Wagner’s score. The horns and trumpets were in top form through
chromatic motifs, and although the strings’ gleaming tone did not always
make its way into the transcendent, there was little doubt of the
orchestra’s authentic connection to this tradition. With so many
subversive productions circulating as we approach the eve of Wagner’s
bicentenary in 2013, perhaps there is no need to fight the inevitable weight of
history.