Lohengrin like never before. It was an orgy of orchestral colors, an adventure in sonic discovery, the absolute summit of virtuosic orchestral delivery. Maestro Nicola Luisotti attacked and conquered Lohengrin.
There. That’s done. What’s left now that it’s all over?
No longer mythic Germanic lore, this tale seemed to be an episode from, say, Ceausescu’s already mythic Romania, where books were torn from library shelves to burn to make electricity to light the libraries. Though in the emptied library in which all this took magic took place there was not enough juice to illuminate all the grandiose (Romanian socialist moderne) light sources. Well, save in the last scene when Lohengrin finally was going to save the masses. But bowed out.
The masses were magnificent socialists, eighty mighty workers (plus a few sword and standard bearers) who whispered in shimmering sounds and roared in full, transparent tones. But with such idealistic and obviously pleasurable glory in their sonority, and willing unity in their regimentation (yes, this multitude of virtuosic choristers was happily organized in lines and blocks) that they hardly needed to be saved from such perfection — to cede such artistry to mere Western materialism would be tragic indeed.
Meanwhile Icelandic bass Kristinn Sigmundsson in socialist general regalia was instructed to walk downstage center and be the embattled king Heinrich. Mr. Sigmundsson, once an estimable artist, here was perfect as crumbling, ineffective power. Baritone Brian Mulligan, a San Francisco Opera fixture, was Heinrich’s prissy acolyte, a welcomed vocal contrast to his superior. Mr. Mulligan is a richly voiced singer who complemented the maestro’s musical textures while overwhelming the import of this mere herald.
American tenor Brandon Jovanovich was the Lohengrin, a role debut. He apparently has a new voice teacher as the perfectly reasonable tenor we heard a few years ago as Luigi in Il Tabarro has been transformed into a trumpet. While he has not yet mastered the subtlety of tone of a fine trumpeter he does have a surprising variety of volume if not color, though his first and last words in the opera were delivered in a tentative half voice that was cause for concern. Even with its moments of real beauty the sharpness of his tone worked with the costuming of this production to make him look and sound gawky. Though this maybe helped establish the assumed caricatural intent of this conception of Lohengrin. 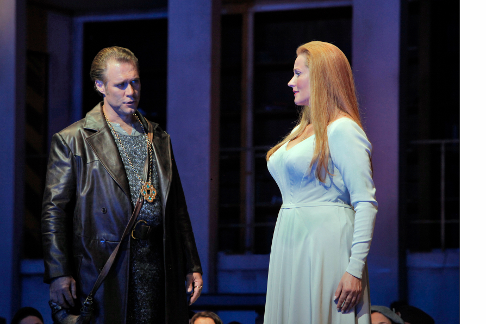 Brandon Jovanovich as Lohengrin and Camilla Nylund as Elsa von Brabant
Of the five principals the Elsa of Finnish soprano Camilla Nylund realized the most successful character. Elsa herself is a lost soul, and Mlle. Nylund though looking like a well-kept Romanian apparatchik had no idea how to be one. The purity of her voice and the innocence of her presence served her well, though in the bigger moments her voice could not ride the the maestro’s mighty crests, as could, for example, the out-of-scale voice of Mr. Jovanovich.
German bass-baritone Gerd Grochowski seemed over parted as Telramund, diminishing the stature of evil in Wagner’s struggle to overcome baser levels of humanity. Mr. Grochowski’s fine baritone and interesting persona are more at home in roles that are more lyric and perhaps more complex psychologically. He lacks the inherent vocal color and physical force to personify an uncontrolled thirst for power, willing to say or do anything to get it. Reduced to a whimpering wimp in this production there was little for all those arcane powers of the Holy Grail to overcome.
Joining her homeless husband as Ortrud, the bag lady was German mezzo Petra Lang. Mme. Lang did not seem to be in good voice, her final curse thinly delivered, again underlining the opera’s need to endow evil with enough stature to be worth overcoming. As it was the famous pollution of socialist industry managed to create quite atmospheric lighting for Ortrud’s scenes brainwashing Telramund and deceiving Elsa, convincingly delivered by Mme. Lang. 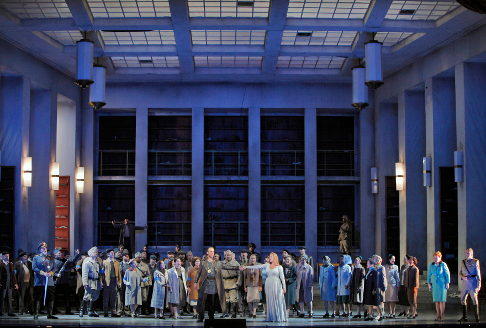 A scene from Act I
The production by British director Daniel Slater and British designer Robert Innes Hopkins is from Geneva (2008) and was already in close-by Houston (2009). It apparently has the intention to remove all magic from Wagner’s tale where swans ferry supernatural knights back and forth from an imaginary mountain. The musical moments for these arrivals and departures are truly momentous, even in ordinary circumstances, but here the workers and apparatchiks stare always forward only to discover and not seem to care that the bus terminal was behind them.
The production could not support the musical values imposed by Mo. Luisotti. Magic, and a lot of it was sorely needed to give place and meaning to this mountain of sound.
Michael Milenski