Director Michael Mayer has successfully filled an inside straight in moving the Metropolitan Opera’s new Rigoletto from 16th century Mantua to early ’60s Las Vegas.
Instead of a hunchback court jester, the Vegas Rigoletto is a waspish casino comic with only a bit of padding under the left shoulder of his sweater to suggest a very slight disability. That sweater is a red, orange, green and white horror in an argyle or Harlequin pattern, providing a single link to Verdi’s jester. This Rigoletto does not limp around, even when the rhythm of his music in Act Two (“La ra, la ra, la ra”) demands it.
The womanizing Duke of Mantua, now just “Duke,” is supposedly Frank Sinatra, the leader of the Rat Pack of entertainers who are more or less portrayed in this production (Dean Martin and Peter Lawford among them). He spends most of the opera in a white dinner jacket, surrounded by “courtiers” decked out in glittering dinner jackets of every hue, each in worse taste than the last.
The setting for the first two acts is a casino. Neon, whiskey bottles, dice tables and lounge chairs occupy the set. The third act moves to a house of prostitution with a private room and a pole for dancing. In a decision quite unlike Auntie Met, that pole had a lady slithering around it, naked from the waste up except for pasties hiding her nipples. (This is a non-singing part, in case you are new to this opera.)
The Met also permitted a slangy updating of the text translations used in the titling system. For the most part these titles conveyed the vernacular of the swinging sixties, although there was too much reliance on “baby” and such howlers as “you send me to the moon.”
Mayer deserves great praise for making sense of a scene that misfires in every other production of this opera I have seen: the kidnapping of Rigoletto’s daughter Gilda from her house. This is usually done with a ladder and men in masks on a dark stage. When Rigoletto blunders unwittingly into the scene, the kidnappers blindfold him, spin him around a few times and then set him to work helping in the abduction of his own daughter. This always misfires.

In Mayer’s conception, Rigoletto lives with Gilda in a high-rise apartment building at stage left that is adjacent to the casino. At stage right is a second high rise, identical in appearance. This time when Rigoletto comes upon the scene, the kidnappers send him up the elevator of the other high rise to kidnap a different woman. By the time he realizes the others are not joining him in this caper and descends, they have snatched Gilda, leaving her guardian drugged, bound, and lying on the elevator floor.
Two miscalculations by Mayer keep this production from being a royal flush. The first puzzler is that the curse against Rigoletto is delivered by an Arab sheikh (still named, inexplicably, “Monterone”). This introduces religious and political issues into the opera that are a distraction, and wholly unnecessary. Monterone could just as well have been a gangster whose daughter the Duke has seduced. An angry father is an angry father — Arab or Italian.
The second is the curse itself. While being cursed in 16th century Mantua may have had a devastating psychological effect, it is hard to imagine that this lounge comic in Vegas is going to be unhinged by one. The Duke and his pals were probably cursing everyone all the time, and much worse. Given that the curse (la maledizione) is at the center of the story and is the last word Rigoletto sings when his beloved Gilda dies, it doesn’t carry the ominous meaning suggested in the music. Perhaps if Mayer had set the opera in a religious community where curse words are a sin, it might have meant something. But he didn’t.
Still, it was fun — not that the Vegas setting shed any new light on this warhorse. Indeed, despite interviewer RenÈe Fleming’s leading questions during the intermissions, neither Diana Damrau (Gilda) nor éeljko Lu?i? (Rigoletto) would be baited into admitting that the Vegas setting had made them look any differently at these roles. They should be praised for their honesty — although Mayer and Peter Gelb, the Met’s General Manager, were no doubt hoping for different responses.
Vocally there was much to admire. As Gilda, Diana Damrau offered power and impeccable intonation. Her voice is weightier, but no less agile, than those of Roberta Peters or Reri Grist, two quite different Gildas. The part seems easy for Damrau. Caro Nome was carefully phrased and made a strong impression, and she was rewarded with the largest ovation of the afternoon. She has become too matronly for the virgin Gilda, so this was not the best casting choice for HD, but as a singer she cannot be faulted. 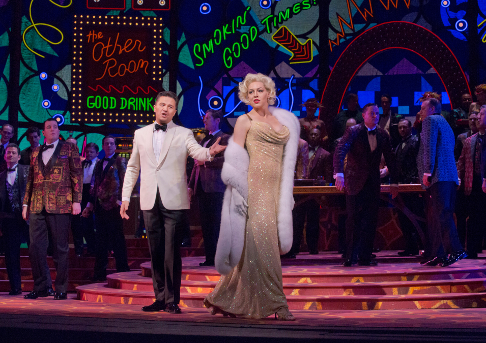 Piotr Beczala as the Duke and Emalie Savoy as Countess Ceprano
Tenor Piotr Beczala was having fun as Duke, or the Duke. ‘La donna e mobile’ was tossed off with swagger, and he concluded it by swinging around that pole in Sparafucile’s brothel. His voice reminds me of Nicolai Gedda’s, another non-Italian who was a successful Duke. Beczala is a handsome man with an open face and great stage presence. He is made for the close-ups of these HD telecasts.
The best singing came from the Sparafucile of bass ätefan Koc·n. His voice is deeply black with a sinister character that matches his snake-like characterization. (He will be singing Konchak in the Met’s new Prince Igor in the 2013-14 season.) The scene in Act One when he introduces himself to Rigoletto and offers his services as an assassin was chilling, helped along by the believable after-hours setting at the casino bar.
Oksana Volkova as Maddalena, Sparafucile’s prostitute sister, has legs that never quit and a smoldering middle-European pout, but her voice was a size too small for the part.
That is also one problem for Lu?i?’s Rigoletto. His baritone is on the dry side, and he sometimes sang flat. However, he is very experienced and had the measure of this part. But ‘Cortigiani, vil razza dannata,’ when he damns the rat packers who kidnapped Gilda, lacked frenzy, and the farewell to his dying daughter lacked pathos. He does not act with his face, and the HD close-ups did him no favors. His facial expressions often did not match his words, and his singing could be too smooth. Rigoletto has to snarl and howl, even in Las Vegas.
The young conductor Michele Mariotti kept things moving quickly, and coordination between the stage and the pit seemed exemplary.
Christine Jones designed the casino set, and Susan Hilferty provided costumes that extended its Vegas glitz. The neon was courtesy of lighting director Kevin Adams, who used it to good effect in the storm scene in Act Three.
In sum, Mayer has dealt the Met a winning hand with this Rigoletto, one that should appeal to audiences for at least the next decade.
David Rubin

This review first appeared at CNY CafÈ Momus on 17 February 2013. It is reprinted with the permission of the author.