The matinee performance on Saturday March 16, 2013, in San Diego was the work’s West Coast premiere. The title refers to the yearly migration of monarch butterflies between the United States and Mexico.
Prior to the arrival of the Spanish, the indigenous people of Mexico made music with rattles, drums, flutes, and conch-shell horns. The Spanish introduced violins, guitars, harps, brass instruments, and woodwinds which tended to replaced most of the original instruments. Native peoples learned to play and eventually to make the European instruments, which were first used only for Mass. Later the new instruments came into more general use but some of their shapes and tunings were adjusted for local use. Mexican music has evolved greatly over the intervening centuries, so it has undergone many changes. Mariachi music is thought to have developed from “Son” music, which featured guitars and harps played by part time musicians wearing huarache sandals and white clothing. 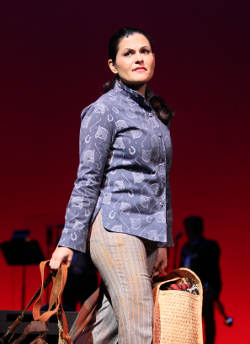 Cecilia Duarte as Renata
By the end of the nineteenth century, the traditions of European music were firmly established in Mexico and various forms of musical entertainment were written and performed by both Mexican and European artists. In rural areas, the members of local bands wore in charro outfits. Later this clothing would be worn by urban Mariachi bands, which until recently were all male. Mariachi music and the musicians who played it became more professional in the nineteen forties and fifties. Mariachi Vargas became a legend, appearing in films and accompanying stars singers. The group expanded by the addition of trumpets, violins and even a classical guitar so that they became a kind of orchestra, keeping the traditional son/mariachi base while integrating new musical ideas and styles. Mariachi Vargas traces its history from the 1890s. Generations of players have maintained the group’s authenticity as a mariachi band while the music has evolved. Although the last Vargas associated with the group died in 1985, the group still considers itself the original band because the music has been passed down from one generation of musicians to the next.
Cruzar la Cara de la Luna (To Cross the Face of the Moon) has been performed in Houston and Paris. The matinee performance on Saturday March 16, 2013, in San Diego was the work’s West Coast premiere. The title refers to the yearly migration of monarch butterflies between the United States and Mexico. Members of families, too, migrate between the two countries and sometimes spend a great deal of time away from their loved ones. Much of the audience in San Diego’s sold out Civic Theater was Mexican-American and many of the people could relate personally to the family portrayed on stage. The show opened with Brian Shircliffe as Mark singing of the butterflies and accompanying himself on the guitar. His baritone voice sounded like liquid gold and his song was the beginning of a very intense performance.
Soprano Brittany Wheeler portrayed the Americanized Diana, a member of the latter generation, who wanted to catch up with her Mexican past. Vanessa Cerda-Alonzo was Lupita, a Mexican village wife whose husband was spending most of his time away from her. Both of them sang with dramatic tones as they portrayed their important characters. Colombian tenor David Guzman was the lone high male voice in this performance and his trumpet-like sound was a good fit with the Mariachi orchestra and the lower voices of much of the cast. 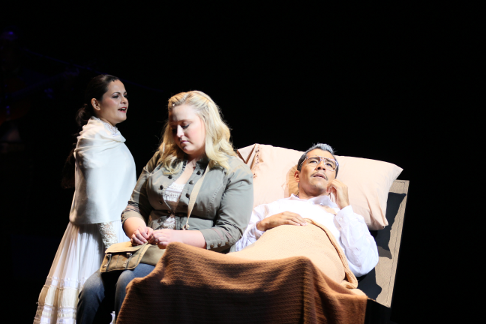 Cecilia Duarte as Renata, Brittany Wheeler as Diana and Octavio Moreno as Laurentino
The most fascinating character was Renata, played by Mexican mezzo-soprano Cecilia Duarte. She sang both lyrical and dramatic songs, she also danced, and her characterization brought tears to the eyes of many in the audience. Because Renata missed her husband, she hired a guide to take her and her son to him. She told no one that she was pregnant and wanted her baby to be born in the States. Unfortunately the long walk through the desert was too hard for her and, like others before her, she died before reaching her goal. The guide took the little boy back to Mexico, but he did not see his father for many years. Duarte gave an amazing performance and I would love to see her again.
Saul Avalos was a committed Chucho; Octavio Moreno a strong voiced Laurentino, and Juan Mejia an energetic Victor. The music composed by JosÈ Pepe Martinez is sometimes dramatic and at other times lyrical with kind of a big band sound from muted trumpets. His use of the harp added welcome rhythmic textures while the text told the story clearly and with considerable detail. Foglia’s scenery was practical, Cesar Galindo’s costumes attractive, and the lighting by Brian Nason made the visuals most effective.
Supertitles were offered in both languages so that whether you spoke Spanish or English you always knew what was being sung. The Mariachi band was led by violinist Jose Martinez, Sr. The three trumpets were always perfectly in tune, as were the harp, vihuela, guitarron, and guitar, but there were one or two instances when the violins were not completely synchronized. It’s a shame that the company was only in San Diego for one day. Let’s hope they will soon be back. Before and after the opera there were performances by Mariachi bands on the plaza outside the theater and it was good to see so many excellent local groups taking part.
Maria Nockin