A member of the same generation as Ottorino Respighi and Gian Francesco Malipiero, he started out to be a playwright and had two works staged before he entered the conservatory of his native Parma to study music. Some years later, Pizzetti was a conservatory teacher and administrator, first in Florence and then in Milan. In 1936 he succeeded Respighi at the Academy of St. Cecilia in Rome where his students included Mario Castelnuovo-Tedesco. Pizzetti was influenced by poet and playwright Gabriele d’Annunzio and he wrote incidental music for several of the latter’s plays. In 1939 Pizzetti was named to the Italian Royal Academy. Although his relations with the fascist government of Italy were occasionally stormy, they were often positive, and that may be one reason why his works have seldom been produced since then.
He composed his first opera, Sabina, in 1897. Between then and the premiere of Murder in the Cathedral (Assassinio nella Cattedrale) on March 1, 1958, he completed eleven others. Murder in the Cathedral is two-act opera with a libretto by the composer based on Alberto Castelli’s Italian translation of T.S. Eliot’s play of the same name. It deals with the killing of Archbishop of Canterbury Thomas Becket by followers of King Henry II in the twelfth century. Henry is supposed to have asked if no one would rid him of the troublesome priest. That may have been all that was necessary for his followers to assume they had reason to murder Becket.
On April 2, 2013, San Diego Opera staged Pizzetti’s Murder in the Cathedral with leading Italian bass Ferruccio Furlanetto in the title role. General and Artistic Director Ian D. Campbell staged the work in a straightforward manner that made the story easy to grasp. Ralph Funicello’s unit set, consisting of bright colored stained glass windows with steps and platforms, looked like the inside of a great cathedral. Lighting was a large part of the dÈcor and Alan Burrett’s designs were most effective. Costume designer Denitza Bliznakova dressed the Archbishop in the timeless robes of the Catholic Church, the First and Second Chorus soloists in crimson, and the remaining choristers in the muted colors of twelfth century England. 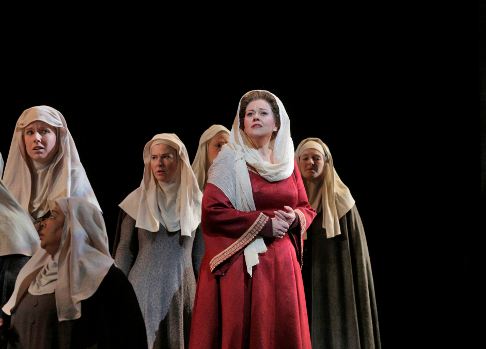 Susan Neves (in red) as the First Chorus
The story of this opera, the conflict between Church and state, seems to have gone on forever. I was reminded of the murder of Martin Luther King so many centuries later. Like Becket, King knew that it could happen. Italian bass Ferruccio Furlanetto excels in the interpretation of roles on both sides of this conflict: Philip II in Don Carlo and Becket. Murder in the Cathedral is a thinking person’s opera. Furlanetto is in the prime of his career and his opulent voice flowed over the orchestra and into the auditorium like a magnificent force of nature. This is an opera he was born to sing. He is also a fine actor and when he was on stage you could not take your eyes off him.
Susan Neves and Helene Schneiderman sang the First and Second Chorus who commented on action. Since there was no love interest, their parts were much smaller than that of the Archbishop, but both sang with ringing tones. The other star of this performance was the San Diego Opera Chorus led by Charles F. Prestinari. Their harmonies were strong and they coalesced as a group. They really did not get to act as individuals because they were a unified congregation. For the finale they were joined by the excellent Children’s Chorus fro St. Paul’s Cathedral. 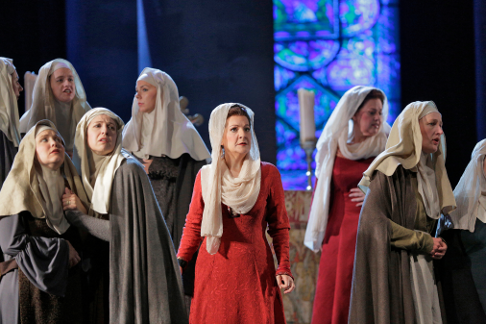 Helene Schneiderman as the Second Chorus with Susan Neves as the First Chorus in the background
Alan Glassman was the trumpet voiced Herald who announced each arrival. His presence in the part was true luxury casting. The other roles were actually parts of trios or quartets. The three priests who sang with dramatics tones as they tried to protect their Archbishop were tenor Greg Fedderly, bass-baritone Kristopher Irmiter, and bass Gregory Reinhart. The four tempters were also the four knights who eventually killed Becket. Tenor Joel Sorenson had a high lying difficult part but acquitted it with finesse. Baritone Malcolm MacKenzie, the smooth voiced Count Di Luna of the AZ Opera Il Trovatore, was a dramatic Second Knight, while bass-baritone Ashraf Sewailam and bass Kevin Langan, the sonorous Third and Fourth Knights, were properly villainous thugs.
Conductor Donato Renetti made a very auspicious San Diego Opera debut with this performance. The large orchestra responded with precise playing of this new and interestingly orchestrated score. I hope we will hear a great deal more from Renzetti.
Special kudos go to English Hornist Andrea Overturf for his beautiful phrasing. This was a spectacular evening at San Diego Opera and I hope this fine opera will be heard more often from now on.
Maria Nockin