Before we explore the girl’s presence, we must meet Floria Tosca, the
eponymous heroine of the opera, originally the creation of French playwright
Victorien Sardou. Sardou’s five act play, La Tosca, which takes
place in Rome on a June day in 1800, was an immensely popular work with which
Sarah Bernhardt toured the world. Puccini and librettist Luigi Illica reduced
the work to an intense and brutal drama featuring three principals: Tosca, a
famous opera singer; the artist Maria Cavaradossi, her lover, who is sheltering
an escaped revolutionary prisoner in his country home; and Baron Scarpia, chief
of police, who lusts for Tosca. Lusts is the right word. He announces that he
plans to have her violently and briefly. After arresting Cavaradossi, Scarpia
invites Tosca to his office, from which she can hear Cavaradossi’s screams of
pain as he is being tortured. Scarpia sentences Cavaradossi to death, then
appears to agree to a mock execution and a safe conduct out of Rome for the
lovers if Tosca will surrender to him. When Scarpia has signed the order and
turns towards her, Tosca stabs him to death. Immediately thereafter, she rushes
to prison to tell Mario there will be a fake execution, but when he is really
shot, and her own crime is discovered, Tosca leaps from the prison tower.

Sondra Radvanovsky’s appearance as the Roman diva made this a special
occasion for the Los Angeles Opera company and its audience. Since the
soprano’s first appearance with the company in 2004 in Verdi’s Il
Trovatore, she has made an international career in Verdi roles. Ms.
Radvanovsky’s radiant voice is evenly produced throughout all registers. Her
moving “vissi d’arte” which concluded with a messa di voce brought
vociferous applause. Her stabbing of Scarpia with two knife thrusts was one of
the most vehement I have seen. 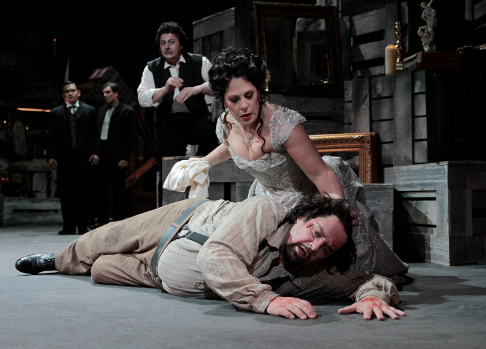 Sondra Radvanovsky as Tosca and Marco Berti as Cavaradossi, with Lado Ataneli as Scarpia

Lado Ataneli made a suave yet savage Scarpia. Keeping with his character,
Puccini has given Scarpia sinuously lyrical passages, which the Georgean
baritone delivered with subtlety and power. It’s a shame that opera audiences
of late have demonstrated a childish tendency to hiss or boo villainous
characters at their curtain calls. Ataneli was deprived of the appreciation he
deserved. Philip Cokorinos, Joshua Bloom as the Sacristan and Angelotti, the
escaped prisoner, respectively, turned in convincing performances, as did Eden
McCoy as the young girl. Maestro Domingo led a well-paced performance. At times
he seemed to be bent over as though to extract still more emotion from his
orchestra. However he effected it, Puccini’s orchestration sounded lush.

John Caird, who has earned honors and worked on every kind of stage
throughout the world, led the production team for Tosca, which he
originally created for Houston Grand Opera in 2010. Caird considers
Tosca “one of the greatest works of music theater ever written”
and has lauded its “overwhelming musical, human, moral and religious
powers.” At the same time he has enhanced verismo violence by staging a
bloodier than usual Tosca. Each act opens with an ever more blood-
blotched fore curtain, which is pulled down by the first character to appear in
the ensuing act. And he has Tosca slit her own throat. Neither sets nor
costumes give an indication of the time of the opera’s setting, though Ms.
Radvanovsky was encumbered with a bustle. What is clear, is that the action
seems to have followed a calamity. The unit sets are dark, unattractive and
except for the last act, cramped. Cavaradossi works on a three story
scaffolding, each of which holds a different part of the Madonna’s face he is
painting. Talk of verismo — if that painting were put together,
there’d be no place to hang it in that church. The second act, usually staged
in Scarpia’s elegant Farnese quarters, is here a warehouse filled with
cartons, statues, all sorts of matter clearly purporting to be ill gotten
gains. The prison is a large empty yard made still uglier for us as we watch
Angelotti’s body being hung. At the rear is a large unbarred, open window —
another “unverismo” touch. 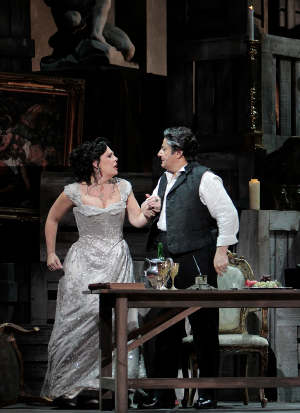 Sondra Radvanovsky as Tosca and Lado Ataneli as Scarpia

But now it is time to return to the virginal girl dressed in communion
white. It is she who pulls down the curtain for the prison scene. She then
crosses the stage, sits at the window’s edge where she sings the shepherd’s
greeting to the sun in a childish voice, “For you I will die,” are its last
words. She will remain there throughout the act. The girl first appeared in the
second act, beckoning to Tosca after the singer killed Scarpia.

There is no mysterious or mystical character in either the Puccini or Sardou
stories. The girl is Caird’s creation. But who is she, why does she sing the
shepherd’s song? Though the director may seem to have forsaken purists’
interpretation of verismo by inserting this vision, he has, in fact,
made more explicit what Puccini had only implied, and what Sardou had made
clear: that Tosca was a child of the church. Puccini’s Tosca lays flowers at
the Atavanti altar, and refuses to kiss Mario before the Madonna. In “vissi
d’arte”, her plea to God, she recalls her devotion and generosity to the
church. Her last word in the opera is “God.” In Sardou’s play we learn
the full depth of Tosca’s faith. She herded goats as a child until she was
found and raised by Benedictine nuns, who expected for her to join their order.
As she began singing and her talent was recognized in the secular world, the
composer Cimarosa insisted she become an opera singer. Sardou tells us that the
entire city of Rome took sides in the ensuing conflict until the girl was
brought to sing before the pope. Charmed by her voice, the pontiff patted her
cheek and told her, “Go your way, my child, you will move others to
compassion, as you have me. You will make people shed gentle tears and that too
is a way of praying to God.”