Marseille has once again proved that making your way to the top is easy — spend some smart money! The Ville de Marseille boasts ten new spaces for the arts, among the more prominent the magnificent all-glass Museum of Civilizations and a gutsy new contemporary art venue in a huge graffiti covered old tobacco factory, not to overlook an old grain elevator on the docks that has become Le Silo, a high tech 1700 seat theater.
All this investment brought vibrant new spin to the Phoenician city (it’s that old) and propelled it to become the European Capital of Culture for 2013. Put this together with a snazzy new trolley system that descends to the Vieux Port (Old Port) with the OpÈra just right there on Rue MoliËre and you have the Marseille that could be.
But sad to say Marseille has not invested recently is its opera house, badly in need of a well planned fire. Back in 1918 following the dress rehearsal of Meyerbeer’s L’Africaine a very efficient fire left only the outer walls and the peristyle [the columned classical porch] standing. It reopened in 1925 having eliminated its original Italian horseshoe shape in favor of a large first tier that offers, with the front orchestra the best seats in the house, and a plenitude of them. Though there exists a superb acoustic for opera and an absolutely splendid spectator-stage rapport the auditorium and its public areas are in dilapidated condition.
The decor is high art deco, think American movie palaces of the same era, though hopefully this is not the reason it is designated an historic monument. The peristyle is from 1787 and therefore proudly qualifies it as France’s second oldest opera palace. This stately colonnade with its splendid frieze has survived all earlier fires and surely could survive most any future fire — may we dream of a state-of-the-art twenty-first century hall and stage behind it.
Plus to be sure there is a second tier and above that there is the once infamous, very vocal amphithÈ‚tre (the upper most gallery) where Maurice Xiberras, its current directeur gÈnÈral, likes to say he was taken at seven years of age by his grandparents to be smitten by opera. Most of all monsieur Xiberras wants us to understand that the OpÈra de Marseille now strives to be populaire, that its supposed audience of longshoremen, cafe waiters and petits commerÁants want nothing more than steak-frites and moules mariniËres and bel canto.
After all if you want cutting edge opera you can go one half hour up the road to the prestigious Aix Festival (but only in July), or cross the swampy Camargue in a bit more than an hour to Montpellier where the OpÈra National de Montpellier oozes artistic pretension.
In Marseille there is the ThÈ‚tre National de Marseille and the Ballet National de Marseille, entities that are primarily funded by Paris and therefore subject to France’s national artistic aspirations. The OpÈra de Marseille is decidedly not an opÈra national, a position underlined firmly in 2011 when France’s then minister of culture, FrÈdÈric Mitterand descended in an attempt to impose Parisian standards on Marseille’s opera. He suggested that the director of the ThÈ‚tre National de Marseille, Mme. Macha MakeÔeff, replace Mr. Xiberras and offer classier programming. 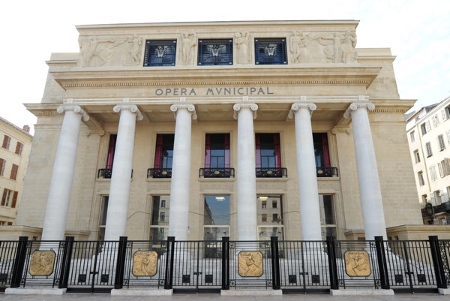