Still, they had clearly made the
most of their interval picnicking, about which a little more anon. To see
The Marriage of Figaro, the first opera staged at Glyndebourne, and
the first staged at the new house too (preserved on a wonderful DVD, with
Bernard Haitink as conductor) ought to have been the icing on the cake. Of
course, it ought to have been the other way round, Mozart and Da Ponte coming
first, but Michael Grandage and his revival director, Ian Rutherford had no
intention of permitting that to happen. (As shorthand, I shall refer to
Grandage, but it may be that Rutherford modified an initial conception to a
considerable degree. The curious may consult a DVD from last year now
available; I do not think I can bear to see it.)

For no apparent reason, the action is shunted into the 1970s, the decade,
which, everyone seems to agree, taste forgot, whatever its virtues may have
been. It seems a peculiar substitute for the eighteenth-century. No attempt
seems to have been made either coherently to re-imagine the action — the
intricate comedy based upon a society of orders, let alone the droit de
seigneur is, as much as possible, simply ignored — or boldly to present
something new. For the former, Jean-Pierre Ponnelle remains a magical DVD bet,
aided by Karl Bˆhm, the Vienna Philharmonic, and a cast, headed by Dietrich
Fischer-Dieskau, Kiri Te Kanawa, Hermann Prey, and Mirella Freni, for which the
phrase ‘to die for’ might have been made. (The aforementioned Glyndebourne
production, directed by Stephen Medcalf, has a fair share of magic too.) Claus
Guth’s superlative Strindbergian retelling from Salzburg heads the
other camp; it should not work, but it really, really does.

Chez Grandage, at best what we have is a pointless updating, with
nothing to say either about Figaro or about the 1970s. Much of the
time, however, the situation is far worse; this most perfect of operas — give
or take a CosÏ — is treated as fodder for a variety of slapstick at
which even the lowest common denominator might cavil. With a few design hints
of the original Spain — it seems no more specific than that — what we see
resembles a particularly un-amusing episode of the little-lamented British
sitcom, Duty Free. The Overture endures the arrival of the Count and
Countess in a sports car — presumably, because the budget can. Hideous
outfits, sometimes with a vague ‘Spanish’ air, sometimes not, come and go.
No context is suggested for the coexistence in a villa-like location of
alternatingly strange and uncharacterised people. Even an ill-behaved audience
thought it beneath itself to laugh — perhaps the sitcom custom of ‘canned
laughter’ should have been adopted — at Susanna reacting to Cherubino’s
malodorous socks. The nadir, however, was reached when, at the end of the third
act, quite deaf to Mozart’s score, some of the most embarrassing disco
dancing I have ever witnessed — and even if ‘embarrassing’ were the
point, that does not excuse it — was foisted upon the work. As if that were
not enough, some sections of the audience started clapping along, albeit with a
disturbing lack of rhythm. We seemed to have moved from Duty Free to
Hi-de-Hi! (For those innocent of the ‘heyday’ of the British
sitcom, Youtube may well have clips; I should recommend spending the time with
Ponnelle and Bˆhm instead.) It was well-nigh impossible to hear the orchestra
for such loutish behaviour: doubtless encouraged by the staging, but
nevertheless the responsibility of the perpetrators.

And, just to make things even worse, the surtitles alternated between the
embarrassingly demotic (Susanna again, being compelled to comment approvingly
on Cherubino’s ‘moves’); the absent (far too much of the recitative); and
the often wildly inaccurate (why a ‘signature’ for the army officer’s
seal?) Whoever is responsible needs to address the problem, since it is not an
exception; the titles for Ariadne
auf Naxos made almost as much a mess of Hugo von
Hofmannsthal’s exquisite text. It is a problem that can readily be corrected,
and certainly ought to be.

Musically, things were better, though far from what we all know
Figaro can be, whether from great recorded performances or memories in
the theatre. To be fair, the production did its best to overshadow the music,
so there was little scope for outstanding assumptions of almost any role. Adam
Plachetka seemed a little neutral as Figaro to start with, but warmed up; Laura
Tatulescu, whom I admired in ENO’s
Castor et Pollux, similarly as Susanna, in a lively performance.
Much the same could be said of the Almavivas. Joshua Hopkins offering genuine
rage without bluster in his third-act aria, and Amanda Majeski sang well
enough, if not quite in style: either a little bland, or a little tremulous.
Lydia Teuscher’s Cherubino was fine as far as it went, but was not helped by
certain tempo choices and suffered somewhat from a lack of tonal richness; it
was difficult to believe in her as a boy. I should not, however, be surprised
if performances improved considerably during the run; they often do, and there
was in any case nothing really to complain about here. In this context, it was
perhaps unsurprising that the stock buffo characters came off best,
Anne Mason’s Marcellina and Luciano Di Pasquale’s Bartolo particularly
noteworthy. 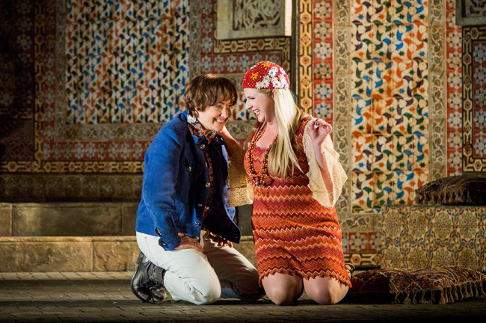 Lydia Teuscher as Cherubino and Sara Lian Owen as Barbarina

JÈrÈmie Rhorer’s conducting of the London Philharmonic Orchestra had its
moments, but they were moments. There was little sense of Mozart’s tonal
architecture, so crucial to delineating the drama; moreover there were a good
few perverse choices of tempo, whether considered in themselves or in context.
I do not think I have heard ‘Non pi˘ andrai’ taken either so lightly or so
quickly; it is certainly not an experience I wish to repeat. Another problem,
in some ways still more serious, was of general listlessness, the music
swimming along somewhat aimlessly; it often seemed genuinely uncertain whether
this were what Rhorer had insisted upon, or whether it were what he had fallen
into. A related issue was that of far too many cases in which stage and pit
fell apart. The odd instance might be ascribed to a singer, but not a
persistent problem. When it was permitted to do so, the LPO played with spirit
and with warmth, provided one could take the rasping of natural trumpets
(though not horns). How one longed, though, for this fine orchestra, with so
splendid a pedigree in Mozart, to be reunited with the likes of Haitink. One
longed still more, of course, for a staging that began to do justice to the
work.

This is a co-production with Houston and the Met. It will be interesting, to
say the least, to see how it goes down across the Atlantic.