The Singspiel is a comedy with an improbable plot. How did a nice
girl like Konstanze get mixed up with a Turk? How does a tyrant suddenly turn
into Good Guy? Daniel Slater’s imaginative invention might not follow the
score note by note but it reaches the free-wheeling, zany spirit of the comedy
Audiences should have the maturity to realize that the opera is strong enough
to support different perspectives. Beckmesser would explode in a frenzy of
fury. Mozart, though, would be cackling with delight.

Mozart didn’t encounter many real-life Pashas. Selim is a man of
formidable wealth and power. Men this rich aren’t in touch with reality.
They’re isolated in their places, guarded by paranoid henchmen. They don’t
do things like normal people. Turning Selim into an oligarch isn’t mere
updating. It’s a perceptive reading of the personality type. This Selim
(Aaron Neil) likes football. “I built my house near the stadium. Or did I
build the stadium near my house”. This deepens the portrayal and is an
opportunity for good visual effects. The backdrop suddenly opens and a real
Jaguar is driven onstage! This is Wormsley after all, where they do things in
grand style. Football also serves as plot device. It makes Selim human. Osmin
(Matthew Rose) can see through Belmonte (Norman Reinhardt) and Pedrillo (Mark
Wilde), because they know his weak spot. When Selim’s team win a match, he
drops Konstanze, as easily as a child moves on to a new toy. The contrived
ending becomes perfectly logical.

Slater replaces the German spoken dialogue with multi-lingual banter. Why
not ? How did the “Turks” communicate with the “foreigners”? When Osmin
says “Ich hass Englander!” the audience laughs, but the idea springs from
the original libretto. In the Vienna of Joseph II, England represented liberty.
Osmin isn’t so much a Turk as an agent of repression. Thus Blonde sings
“Ich bin eine Engl‰nderin, zur Freiheit geboren”. It’s doubly funny when
we know that Susanna Andersson is Swedish and is cooking up a sokker
kaka. Her mistress is being preened in a spa where calories are seditious.
The new dialogue is fast-paced and funny even when the jokes are deliberately
hammy. Comedy subverts. 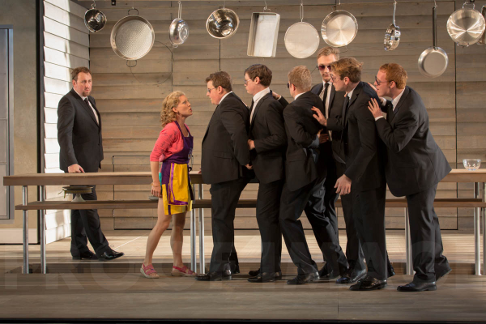 Matthew Rose as Osmin and Susanna Andersson as Blonde

Garsington Opera at Wormsley is a good size for Mozart and Douglas Boyd, the
new Artistic Director, has spoken of its potential as a house for Mozart. (read
the interview here).
The musical standards in this Die Entf¸hrung aus dem
Serail were very high. Matthew Rose’s Osmin was so well-defined
that his performance would be impressive even in a much larger auditorium. He
has been singing with Garsington Opera since the early days of his career. The
company prides itself on nurturing young talent and singers remain loyal. Rose
and Susanna Andersson made a striking pair. He’s very tall, and she’s very
short, reflecting the imbalance of power. Both are equal as singers. Together
they duelled as much as duetted. Although the bigger ensembles usually attract
more attention, the conflict between Osmin and Blonde is the critical heart of
the opera.

Rebecca Nelsen sang a feisty Konstanze. In the torture scene, she’s seen
sitting in the same reclining chair she used in the spa. Now it’s an
instrument of torture, the ideas not unconnected. Mozart writes tension into
the music to suggest extremes of pain and screaming. Nelsen’s “Marten aller
Arten” felt vivid, as if she were shaking with the effect of electric shock,
though she maintained the proper flow.

Much credit must go to Francis O’Connor who designed the set. There
isn’t much backstage area at Wormsley, since the pavilion was designed as a
temporary structure. O’Connor’s simple backdrop suggest an impenetrable
wall when Belmonte stands alone before it. Later segments pop in and out
through recessed compartments. One becomes a lift which suggests movement
beyond the stage, though it’s of course illusion. When the conspirators
escape the guards, the guards are seen watching football in security control.
The torture scene was particularly well executed, though that’s perhaps the
wrong choice of words. The same compartment which had served as the lift and
the entrance for the Jag became a claustrophobic room in stark black and white.
Stagecraft rarely gets the attention it deserves, but it makes good drama
possible. At Garsington Opera at Wormsley, technical facilities may not be
huge, but they are used very effectively.