On Monday August 5 Santa Fe opera presented a revival of Giuseppe Verdi’s La Traviata with Brenda Rae in the title role. Since there is no curtain in Santa Fe, the entering audience saw a stage full of boxes with varying heights. Conductor Leo Hussein, like many of the artists in the production, was making his debut. His take on the story was immediately ascertainable when he played parts of the overture with an earthy tone. This was Violetta’s world, where otherwise refined men wined, dined, and cavorted with the most expensive Parisian courtesans.
The women’s costumes were colorful with extensive dÈcolletage, tiny waists, and huge slits in their full skirts. Director Laurent Pelly acknowledged using costume design to help tell the story. Rae was a totally uninhibited Violetta who was smitten with Alfredo as she sang “Ah forsË lui” but repented her momentary lapse in an emotional “Sempre libera”. She has a good-sized voice and, except for one or two notes, her coloratura was neat and clear. Rae is a fine actress who easily communicates her feelings across the orchestra pit. 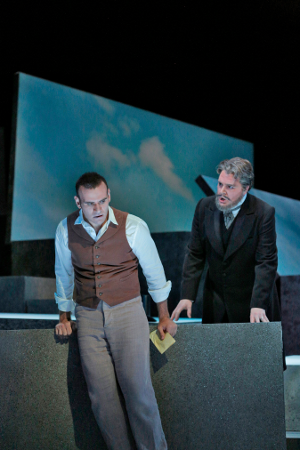 Michael Fabiano as Alfredo and Roland Wood as Giorgio Germont
Michael Fabiano sang Alfredo with innumerable gradations of dynamics and Hussein kept the orchestra’s sound level at a point where the lyric beauty of his voice could best be heard. He is a tenor whose talent promised much and in this performance he gave us even more than what was expected. Roland Wood was an officious Germont who began with a rather gruff sound, but his tone improved as he sang the part’s more lyrical moments, however. Despite the constant presence of the boxes instead of space and furnishings, Stage director Laurent Pelly and his artists succeeded telling the story in a most convincing manner.
Brenda Rae is a consummate actress who used halted phrasing and variations in dynamics to depict Violetta’s weakness. When she read Germont’s letter in the last act, she sang “Ë tardi” (it’s late) and dropped the mirror in her attempt to sit up. Then leaning over the bed in her distress, she looked into the fallen mirror to sing “Oh, come son mutata” (how I have changed). That brought the immediacy of her heartbreak to everyone in the theater. Verdi brought his message home by showing the stark contrast between her anguish and the cheerfulness of the masked chorus of holiday celebrants. The presence of Dale Travis as Doctor Grenvil was a bit of luxury casting. His bass-baritone voice added a great deal to the opera’s finale. 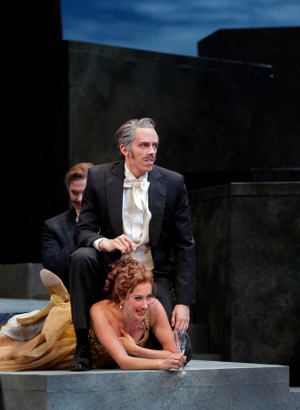 Jennifer Panara as Flora and Jonathan Michie Baron Douphol
Several of this season’s apprentices had solo roles in this performance and all of them performed well. As Flora, Jennifer Panara was a lively, party-loving member of the demi-monde. The Annina, Rebecca Witty, on the other hand was a stolid but faithful servant who would not desert Violetta in her last hours. Tenor Joseph Dennis and bass Rocky Sellars were the obsequious servants of Violetta and Flora. Bass-baritone Andre Courville was a suave Marquis d’Obigny and bass Adam Lau was an effective messenger. This rendition of La Traviata gave a good start to this week’s five opera sequence.
Maria Nockin