That is more or less what happened last night at San Francisco Opera. Though the forces for Der Fliegende Holl‰nder are relatively modest — three principal singers live the drama, three more offer background story; orchestrally there are but double winds, (except triple trombones and five horns). San Francisco Opera beefed up its chorus to a grandiose seventy-eight, after all it is a Wagner anniversary, and there were a few extra strings as well.
But Der Fliegende Holl‰nder is the inauguration of Wagner’s uniquely fertile exploration of redemption through love, and it is emblematic of the tragic idealism that exponentially enriches nineteenth century art. It is conceptually and philosophically big art.
San Francisco Opera partnered with the OpÈra Royal de Wallonie (a province of Belgium), that has a sizable presence in French provincial opera for this new production of Dutchman conceived by French/Romanian director Petrika Ionesco. Mr. Ionesco is known to San Francisco audiences for the ThÈ‚tre du Ch‚telet (Paris) staging of Cyrano de Bergerac seen two years ago at the War Memorial — a swashbuckling, cinematic conception that made the most of a slight opera for a broad audience. Mr. Ionesco has staged both Aida and Nabucco at the 80,000 seat Stadt de France and Continents on Parade at EuroDisney.
For those of us who did not see the Vaisseau FantÙme in LiËge accounts say it began with Senta alone on stage in a cemetery (Senta does not appear in the libretto until the second act) and ended with Senta freezing to death among the same tombstones — the opera became Senta’s dream (Senta works in a factory that makes clothing and sails for sailors thus in her dream piles of cloth had become tombstones by means of tricky lighting).
In LiËge the Dutchman flew onto Daland’s ship attached to a huge anchor to seek protection from the opening storm. Then there was some sort of science fiction action that accompanied the Dutchman to a fantasy place of skeletons and cloaks where he tells his tale of woe. The production was said to have been tuned to appeal to a broad public, maybe becoming a bit like a Stephen King novel. 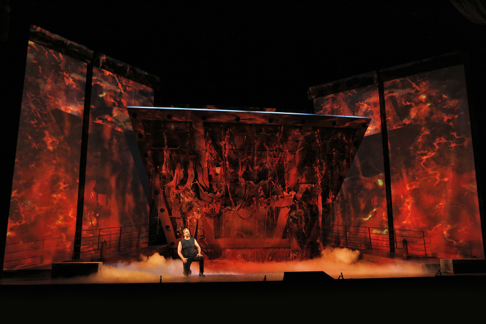 Greer Grimsley as the Dutchman
Strange to say it was not until the production was actually onstage at War Memorial that the current artistic politic of San Francisco’s opera house determined that the production did not conform. Mr. Ionesco and his ideas were dismissed. A fast attempt was made to re-stage the opera by summarizing the action. Senta still began the opera alone on stage but there were no tombstones, and finally she leapt to her death from the remnant of a raised hatch from the Act I ship (though there was no idea where she landed as by that point we had no idea where we were). But it did not seem to be freezing and there was not a tombstone in sight. All this was hardly Ionesco’s adolescent dream, in fact it was simply a walk through of the libretto.
The Dutchman walked on and off the stage from downstage right or left with absolutely no visual magic or fanfare even though he is a phantom hero. He stood totally alone in front of the red lighted fantasy space to deliver his extended monologue as best he could. The considerable snowfall in Act I and the clumsy every-once-in-a-while projections of icebergs that could have dramaturgically motivated a death by freezing remained unexplained, arbitrary atmospheres.
It would have been heroic salvation had conductor Patrick Summers been able to redeem this fiasco through enthralling music. This was not the case, the maestro sought always a richness of orchestral description and color rather than a realization of music drama. Tempos were generally relaxed rather than charged with meaning, apparent first in the leaden overture, and burdensome particularly in the Dutchman monologue and the big Senta ballad. The maestro’s tempos never discovered the joys of a good wind nor found the terrors of a great storm, both stupendous expressive moments in Wagner’s first masterwork.
Mo. Summers is however particularly attuned to his singers, and some very fine, if meaningless performances resulted, most notably the Dutchman himself, enacted by American bass baritone Greer Grimsley. We can assume that the character Mr. Grimsley portrayed on the stage was created for the Ionesco production. The Dutchman was a suffering, vulnerable human man that Grimsley brilliantly portrayed both physically and vocally. He possesses a quite beautiful voice that he colored in many tonalities to fill his monologues with precise and genuine information and feeling.
Summers offered the same support to the Steersman, beautifully sung, and made real by Adler Fellow, tenor A.J. Glueckert. Welsh tenor Ian Storey created an Eric, Senta’s intended, who came across as more threatening than hurt. With a presence more Tristan than as a Hanseatic lad he sang Wagner’s quite felt music beautifully, perhaps too much so for the Ionesco character. His too frequent use of sotto voce was bothersome. Conductor Summers gave Senta’s father Daland the gruffness inherent to Icelandic bass Kristinn Sigmundsson’s persona and voice, a gruffness that resonated as well in the truly plodding tempos the maestro imposed on the dances that begin the third act. 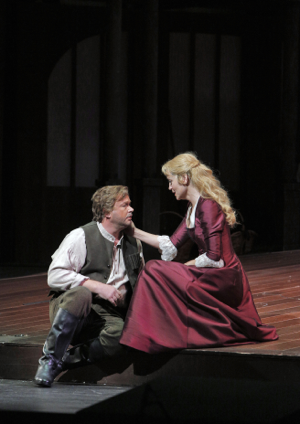 Ian Storey as Eric, Lise Lindstrom as Senta
Originally German soprano Petra Maria Schnitzer was cast as Senta. She was replaced by American (San Francisco) soprano Lise Lindstrom who is a fine singer well suited to the Turandot role she frequently sings on the major stages. Hers is not a voice of youthful sweetness or lyricism that might make Senta a mythical nineteenth century angel of death, but it did serve to portray Ionesco’s neurotically obsessed young woman. Intelligence gathered while the elevator descended to subterranean parking levels reveals that some of us thought she stole the show.
Hopefully such events as this Dutchman are once in a century.
Michael Milenski