If you follow popular culture in general and pulp fiction in particular you will know that both of these music theater pieces are based on novels by horror story titan Stephen King. Carrie The Musical (1988) is famous as the most monumental flop of all musicals until maybe Spider Man. The less said about Dolores Claiborne the opera the better.
Ray of Light Theatre is notable for many reasons, one of which is its feisty attitude to programming. If it is controversial (i.e. wannabe off-putting) it is perfect — in recent years Jerry Springer The Opera (blasphemy), Assassins (inappropriate levity), The Full Monty (male nudity). ROL Theatre makes it all innocent fun that leaves opening night audiences screaming (well, they seem to be mostly friends of the cast).
ROL Theatre is also notable for an enviable production standard. Shows are finished — slickly directed and ably choreographed. Sets and costumes are well designed and executed, suppressing any suspicion of imposed minimalism. Plus ROL Theatre avails itself of the Mission district’s 500 seat Victoria Theatre, a 90-year-old vaudeville theater once named Brown’s Opera House that is not as funky as it used to be but still retains a good vibe for well-produced, off-the-wall shows.
The controversy engendered by Carrie The Musical is how-bad-can-a-musical-be-and-still-be-presented, not to mention the questionable taste of exploiting the adolescent emotions that any hint of adult maturity has left behind. These emotions are not primal instincts, like in Salome for example, but truly base, everyday high-school emotions (though in more significant terms Carrie The Musical speaks to bullying, and to the tragic school massacres). 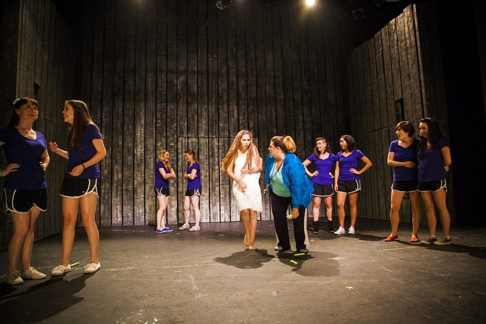 Cristina Ann Oeschger as Carrie, Jessica Coker as Miss Gardner [Photo by Eric Scanlon]
Already the object of ridicule Carrie has her first period (bleeding) in the high-school locker room shower. Her classmates throw tampons at her. One girl, guilt ridden, becomes sympathetic to Carrie’s plight, and forces her football hero boyfriend to invite Carrie to the senior prom. The Cinderella part of the story ends when another classmate dumps a bucket of water on Carrie. Carrie gets even by magically setting her high school ablaze, her classmates inside.
Meanwhile Carrie’s Christian fundamentalist mother, a complicated piece-of-work, must kill Carrie to protect her from original sin. Then the mother either has a heart attack and dies or is stricken down by unidentified outside forces.
The problem with Carrie The Musical in its current incarnation (it was revised for off-Broadway in 2012, and further revised here) is that its writers have found no effective way to infuse Carrie’s telekinetic skills into the action, rendering unrealistic and unexpected the conflagration finale. We need to believe that Carrie actually had the powers to create it, instead we were overwhelmed with production numbers based on familiar high school situations. We needed numbers about telepathic prowess — truly a missed opportunity when you think about it. 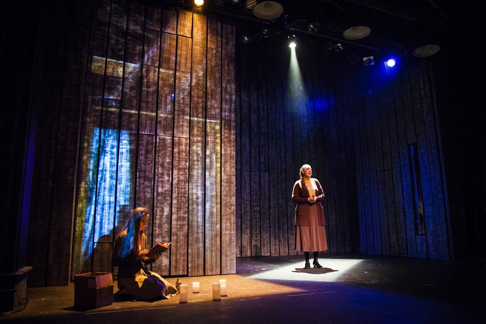 Cristina Ann Oeschger as Carrie White, Heather Orth as Margaret White, her mother [Photo by Eric Scanlon]
Carrie The Musical wants to be mostly about Carrie’s social life, but feels it must explain the isolation created by her mother, Margaret. Margaret in fact has a degree of emotional and intellectual maturity, however screwy, and she provides a rich, deeply human presence in the midst of general high-school superficiality. She draws the emotional focus of the piece to her complicated emotional histories and instinctual forces, and these become her actions. Margaret has a lot to sing about and Carrie The Musical makes room for her to do so. In comparison a character of such depth and complexity did not materialize in San Francisco Opera’s Dolores Claiborne, its one-dimensional actors motivated by simple, quite explicable reactions to ugly situations. Please see Dolores Claiborne in San Francisco.
Ray of Light Theatre casting was impeccable. These were your high school classmates, your gym teacher, your English teacher. Hopefully this was not your mother. They all sang at the top of their lungs for two hours, their emotions worn on their sleeves. Miraculously their voices held strong to the end, supported by an instrumental ensemble of six players always at full forte — Carrie The Musical is plug-in music indeed.
This small company, with Berkeley’s West Edge Opera, and Carmel’s Hidden Valley Opera Ensemble have made some very interesting operatic art this fall, something often in short supply at our more corporate institutions. Carrie The Musical deserves to be a hot ticket.
Michael Milenski