Simon McBurney’s production is audacious but absolutely true to Mozart’s cheeky, irreverent generosity of spirit. Tamino and Papageno find Enlightenment (and the girls of their dreams) because they dare face the tests before them. Each takes the journey in his own way: the saga transcends time and place. From Greek myth to Parsifal, even to Star Wars, the allegory refreshes itself in endless retelling. It is a universal voyage of self-discovery. 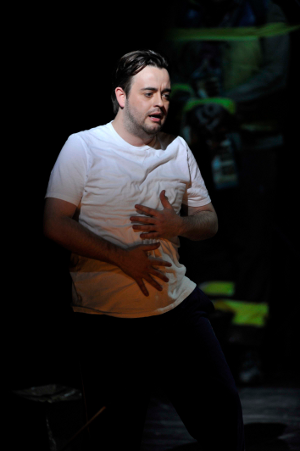 Simon McBurney and ComplicitÈ create dazzlingly imaginative theatre. Their A Dog’s Heart was astonishingly vivid. The opera was a mess but the staging turned it into art. With Mozart, McBurney has infinitely better music, and rises to the challenge. As we hear the Overture, we see a hand write words in chalk on a blackboard. As the opera evolves we learn its significance. Words communicate. We see images of books on shelves, and up to the moment mobile devices. The stage above the stage is a laptop or Notebook. It’s suspended on wires from the roof and looks dangerously fragile, but that in itself has meaning. Finn Ross’s’ video projections are among the best in the business, and extremely well integrated into the drama. Technology may change the ways we express ourselves, but if we don’t communicate, or refuse to engage with each other, we’re lost. At the end, chalk figures proclaim “WISDOM LOVE”. Simple and austere but all the more powerful for that. 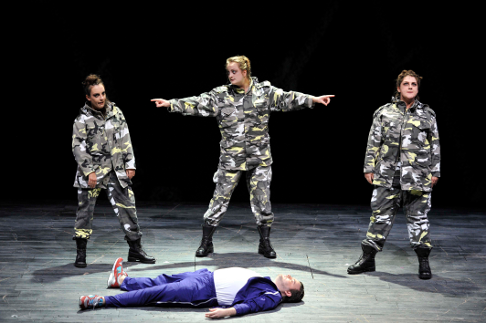 Technology changes in theatre, too. Film and computer-generated images break down physical restraints of production and free imaginative possibilities. The Magic Flute IS magic after all, not realism. It cries for cosmic flights of fantasy. McBurney’s designer, Michael Levine, gives us the night sky in all its glory : myriad sparkling stars in the firmament. The Queen of the Night (Cornelia Gˆtz) in this production isn’t spectacular but the forces she commands most certainly are. Extra-terrestrial sound effects amplify the sense of cosmic spaciousness. Off-stage noises are a natural part of staging. Here they rumble at the edge of consciousness. Gergely Madaras seems spurred to conduct with strong, dramatic flair. This highlighted the quiet moments when the Flute (Katie Bedfiord) emerged. The flute felt all the more magical and fragile. The Flute is more than an instrument. It is fundamental to the meaning of the opera. Like Papageno’s bells, it evokes something pure, primeval and plaintive. McBurney’s staging was musically as well as visually astute. The “birds” that fly in these woods were pieces of paper fluttering like the pages of books. Like the Flute and the bells, economy of gesture expresses deeper meaning.
This staging is beautiful, revealing its charms obliquely, much as the Singspiel tradition is more subtle than later forms of grand opera, and McBurney respects the vibe. The scene where Tamino and Pamina float, apparently suspended in space, surrounded by “birds” is magical. The English dialogue is genuinely witty. Papageno (Roland Wood) quaffs a bottle of Chateauneuf du papageno! 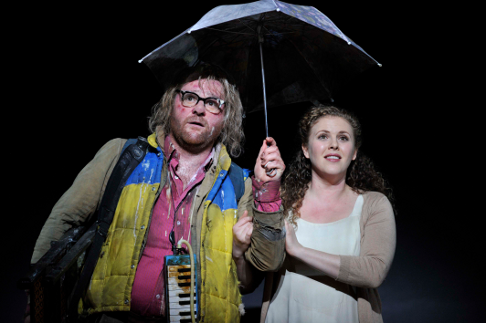 Roland Wood as Papageno and Devon Guthrie as Pamina

The singing and acting were also above average for the ENO, hamstrung as it is by the need to do operas in a language other than those for which they were written. This cast delivered with panache, communicating their enthusiasm with style and wit, obliterating the lumpen ENO Die Fledermaus, killed not by the staging but by the performance.
Ben Johnson sang Tamino. He has stage presence..He even looks right, and creates a Tamino with personality, doggedly battling the situation he’s in. His firm, assertive singing showed that Tamino is not a spoiled princeling but a man of character and resolve who can face what Sarastro, and the world, throws at him.
Roland Wood sang Papageno, ostensibly the lesser, low-born character in the opera but fundamental to its meaning. Princes abound in classical art, but Mozart gives us Everyman as non-hero in a strikingly modern way. From Papageno we can trace a line through to Siegfried and even to Wozzeck, a role taken by many good Papagenos, and one which Wood is surely destined for. The Papageno songs are harder to carry off than they seem because a singer has to express the role’s innate nobility while acting the inept Fool. Spontaneous applause after the Papageno/Papagena duet., and very well deserved indeed. I didn’t like the fake provincial accent and Little Britain connotations which English theatre is obsessed with, but Roland Wood’s personality shines through the disguise. 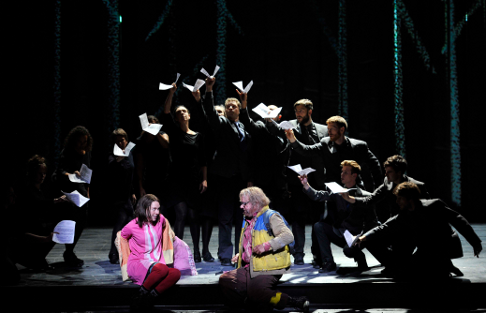 Mary Bevan as Papagena and Roland Wood as Papageno

Mozart’s arias for Sarastro are so resoundingly written that they evoke the idea of Sarastro as a figure beyond time, an acolyte, perhaps, of Egyptian gods. James Cresswell sang the part well, though he didn’t quite suggest the complexity of the character: Sarastro has very dark sides. He’s an unforgiving judge rather than a father figure. Cornelia Gˆtz sang The Queen of the Night. Here, she’s no Darth Vader vamp, as in some stagings, but a surprisingly vulnerable woman. Her Ladies (Eleanor Dennis, Clare Presland, Rosie Aldridge) extend her part. Monostratos (Brian Galliford) conveys the Alberich-like animalism, suggesting that he’s a dark cousin of Papageno, gone bad.
Devon Guthrie sang a lovely Tamina and Mary Bevan a spirited, lyrical Papagena. The Three Spirits were Alessio D’Andrea, Finlay A’Court and Alex Karlsson, costumed as ancients, whose Norn-like purpose they serve.
This Magic Flute might confound those who want their Mozart vacuous, but those who truly love the opera will get a lot from this highly individual, perceptive approach.
For more details check the ENO website
Anne Ozorio