Yet Porgy and Bess has survived through all this! Well, more or less, and even so it again proves itself an operatic masterpiece of the American century.
All the above titles and qualifiers played at New York’s Richard Rogers Theater for nine months in 2012 and began a national tour in San Francisco this November 10 at the Golden Gate Theatre (a barn of an old theater in San Francisco’s, uhm, colorful Tenderloin). It travels on to Los Angeles and to cities in Florida and Ohio.
This Porgy and Bess has new punch indeed. The draconian control over the opera by the Gershwin Estate evidently continues (note the registered trademark logos), here manifest in the Gershwin Estate’s choice of Broadway director Diane Paulus (Hair) to consider perspectives that heretofore have remained buried in its characters and therefore to renew the piece.
The musical adaptation by Diedre L. Murray (Running Man) is always in the Gershwin spirit if not to its letter. For starters Jake sang the second verse of Clara’s “Summertime.” It went from there to music you think you have never heard before. As well the recasting of the story by playwright Suzan-Lori Parks (Topdog/Underdog) may have made some of the old music seem like new music.
Moving from the pit of an opera house to the pit of a vaudeville theater necessitates much reduced orchestration — five woodwinds and six brass (both with an impressive array of instruments to be blown), nine strings, and a keyboard. The percussion battery, somehow manipulated by one player, includes just about anything you can think of to hit or ring.
Additional transformation from opera house to theater is the addition of sound reinforcement. Here Acme Sound Partners (Hair, A Chorus Line) keeps the sound at reasonable levels and the balance of voice to pit at someone’s idea of perfection. Though the wall of sound is quite flat the skilled players in the orchestra wail the great pieces we know so well, and with the percussion battery and digital sound technology create a hurricane that is positively awesome. 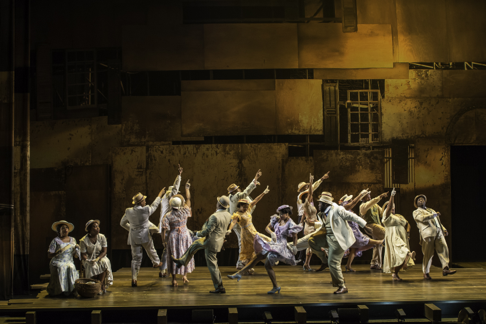 The national cast of THE GERSHWINS’ PORGY AND BESS. Photo by Michael J. Lutch
What makes this production of Porgy and Bess become a fine piece of theatrical art is the minimalism of its staging — only a raked stage platform, an abstract ramshackle back wall, a sky scrim for the picnic, a border to make an interior, a hanging lamp to swing in the storm. There are but twenty-two total inhabitants of Catfish Row, and two policemen. These minimal physical and human resources focused our responses onto the opera’s human tragedies through the joys and sorrows we could clearly perceive on each and every face and body on the stage.
The choreography, by Ronald K. Brown too was minimal, just enough to make it a “show” with a few snappy moves by the bodies that could, and even some surprising, acrobatic moves (the four fishermen being fish) by bodies you were sure could not — there were no skinny chorus boys and girls here.
Unlike the broader and deeper exploration of the human spirit that may occur on the opera stage the Broadway musical heads for always direct emotions. Suzan-Lori Parks has Bess deeply in love with Porgy. Clara hands her baby to Bess who becomes its surrogate mother. A dose of happy dust in a weak moment forces Mariah, the matriarch of Catfish Row to expel Bess, who, devastated, has no where to go but New York. Porgy then seems to be going somewhere too, transfixed by love.
It all works and it is all opera, meaning big stories, big emotions, big music, because of the splendid performances of Alicia Hall Moran as Bess, Nathaniel Stampley as Porgy and Alvin Crawford as Crown. Mlle. Moran plays a weak and strong Bess, warm and fun, above all honest. Bess is complex and of course since it is a musical she is very appealing. Mr. Stampley makes Porgy a simple, warm and open spirit, charismatic and quite handsome. Mr. Crawford is a towering, muscular force, dumb and selfish though he too is good underneath it all. All ably vocally negotiated their numbers, especially Mlle. Moran in an appropriately husky mezzo.
Opera audiences will surely savor the pleasures of this smart production, tightly conceived and very well directed. One can wish for such stagecraft on opera house stages where production values on the level of this Porgy and Bess are very rare, too rare indeed.
For comparison with an opera house production please see Porgy and Bess at San Francisco Opera.
Michael Milenski