It is the staging of Spanish stage director Emilio Sagi (pronounced saw-he) that has many of the ideas he first explored at Madrid’s Teatro Real in a big production that then traveled to Los Angeles, both cities likely harbors for its witty and affectionate quoting of classic hispanic flamenco postures. This San Francisco Barber is a slimmed down, re-elaborated version of the original Sagi conception that will soon be shared with the Lithuanian National Opera.
There was much to like on opening night, notably the polished performances of Count Almaviva and his future countess, characters also known as Lindoro sung by Mexican tenor Janvier Camarena and Rosina sung by American mezzo-soprano Isabel Leonard.
Mr. Camarena provided the high points of the evening, accompanying himself on the guitar for the serenade with virtuoso plucking technique, acting the music teacher with the skill of a sure comedian. To top it off he gave us the rare “Cessa di pi˘ risistere” later known and now better known as “Non piu mesta” from La cenerentola in a dazzling display of fioratura and high notes that brought the house down.
Mlle. Leonard, if not of pure hispanic origin (her mother was Argentine) even so matched Mr. Camarena’s latin excitement and brilliant singing with a presence that exuded refined fun and projected mature vocal and histrionic confidence — a poised Rosina who knew what she wanted and how to get it. Once a student at the Joffrey Ballet School she was well prepared to snap out flamenco poses that easily outclassed those of the official ballerinas.
There were moments of fine, idiomatic conducting. Italian conductor Giuseppe Finzi effectively captured the ephemeral Rossini ethos from time to time (the joy and blatant fun of singing difficult, florid music with aplomb), particularly in his support of the arias of these two singers. As well the maestro often caught the transparent rhythms of the big ensembles where three to six complex and sometimes more vocal lines compete with complete musical ease, conviction and wit.
The set, designed by Spaniard LlorenÁ Corbella, is quite different from the Madrid production. Here it is essentially a narrow, diagonally raked platform thrusting upstage, with an adjacent abstract black area (no scenery) accessible to various contraptions on wheels and lots of choristers. At best the set worked well, the rake providing a dynamic line on which the principals moved up and down, on and off, the black area serving as a space to stage business that elaborates the various musical numbers.
Besides the witty gloss of the flamenco poses, the Sagi production was embellished with lots of spoke wheel vehicles (bicycle like) that gave a sense of lightness and fleetness to the staging that flouted period (century or decade). The costumes as well were embellished with witty abstractions of Sevillian decorations that had little to do with period and everything to do taking costumes onto an abstract musical level.
Various human bodies and objects crawled out from under the raked platform and props flew down from above from time to time to further negate any sense of real time or real space. Barber’s various numbers were arbitrarily placed on the ramp or in the black space and finally everything more or less disappeared anyway to reveal a night sky filled with fireworks (projected). In short director Sagi and his designer Corbella concocted a heady framework for the music of Rossini’s masterpiece. It would have been truly brilliant had it gotten off the ground. 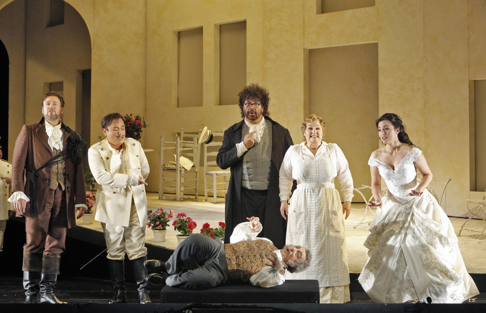 Lucas Meachem as Figaro, Janvier Camarena as Almaviva, Alessandro Corbelli as Bartolo, Andrea Silvestrelli as Basilio, Catherine Cook as Berta, Isabel Leonard as Rosina [Photo by Cory Weaver]
Unfortunately stage director Sagi was more interested in exploring these interesting theatrical ideas than in staging his singers. This lack of a unified and focused dramatic intelligence resulted in the feeling that Rossini’s headstrong characters were arbitrarily walking through the classic comedic process rather than bringing it to life.
A plodding succession of the events of the story we know so well resulted. This sense was exacerbated in the pit. While conductor Finzi did have his truly splendid moments, and there many of them he could not impose a larger musical unity over an act or the evening, evidenced by the overture that ignited no excitement whatsoever. There was a sense of relief when nine dancers appeared to maybe add some life with a bit of abstracted flamenco movement. Alas the choreography was clumsy and meaningless, later met with feelings of dread whenever the dancing became lengthy. 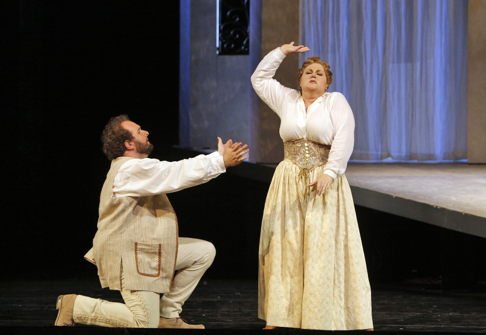 A.J. Glueckert as Ambrogio, Catherine Cook as Berta [Photo by Cory Weaver]
Catherine Cook was the Berta who was as lightheaded as Rosina was weighty minded. She made her aria another of the evening’s high points with the help of her adoring Ambrogio, Adler Fellow A.J. Glueckert who shined as a silent, physical performance artist given he has hardly anything to sing. Bass baritone Hadleigh Adams brought snap and flair to the brief role of the Officer, not allowing his few moments on stage to go unnoticed.
Andrea Silvestrelli brought the considerable panache he provides Rigoletto’s Sparafucile to the role of Basilio. This major role stood out as miscast, and as a vocal misfit into Rossini’s vocal and musical textures. Much the same can be said of the Figaro of Lucas Meachem who confused bellowing with singing and strutting with acting. Italian bass baritone Alessandro Corbelli is a small scale if accomplished Bartolo who here disappeared into the melÈe rather than making himself the cause of it all.
Of the many, many Barbiere productions encountered over the years, this one stacks up among the best. Its glaring flaws could have easily been overcome with more careful casting, conducting, lighting and directing.
Michael Milenski