Back in 2007 the scandals created by Scarpitta’s libidinous Don Giovanni were those of a troubled young man who burst into hysterical laughter in the Act I finale. This set the stage for a gifted young cast to bare its soul in flights of lyricism that became the core and substance of all action. Scarpitta’s staging took us inside Mozart’s music, his set and costume design offered minimal decor that supported but never defined this interior space. Versailles’ Le Concert Spirituel then in residence in Montpellier resonated with primitive sounds that transported us into this rarefied space.
Les Noces de Figaro did not appear until 2012, now with players of the Orchestra National de Montpellier. Austrian conductor Sascha Goetzel delicately and obsessively shaped its many instrumental voices into flights of melodic splendor. The cast was absolute perfection, finished young singers whose lithe bodies slid into luxuriously refined costumes created by Jean Paul Gaultier. When voices and orchestra finally united in Act IV an ultimate level of pure lyricism was achieved — the simple humanity of opera’s most succinctly human opera long forgotten.
And just now Cosi fan tutte finishes the cycle, again with splendid players from the Orchestra National de Montpellier here conducted by Alexander Shelly. This young English conductor made immediate musical impact in the overture by imposing musical depth rather than dramatic thrust. Each moment of Mozart’s music was explored, there was no beginning nor end. The program booklet optimistically anticipated a duration of three hours ten minutes for the performance. It came in at just under four hours. 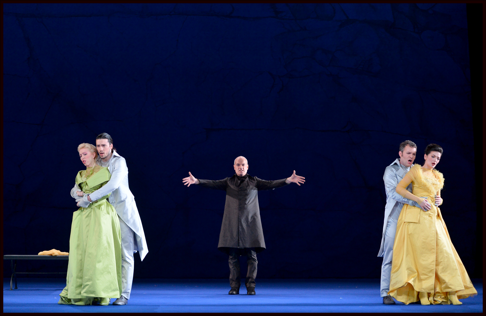 Photo by Marc Ginot / OpÈra national de Montpellier
Like Don Giovanni and Le nozze di Figaro Jean Paul Scarpitta created the setting. Here it was a green floor and a blue wall. Just that. There were six chairs and a couple of little tables that found their way onto the stage from time to time. Nothing more, except quite sophisticated and beautiful lighting by Urs Schˆnebaum.
Though costume design was credited to Mr. Scarpitta, like Les Noces it was understood and obvious that the elegance could only be the work of a grand couturier — well known names flew around the theater. The costumes were splendidly minimal, a plain green gown for Dorabella, a yellow one for Fiordiligi, the gowns easily shed from time to time to reveal shapely legs surmounted by a high style bustle undergarment of the same color. Ferrando and Guglielmo were first seen in white long underwear, then shapely morning coats that were changed to vaguely Harlequinesque vests when they became Turks.
Everyone knows that Cosi has no real story, that it is an abstraction of youthful love as lived by young singers with beautiful voices and good bodies. Scarpitta moved his bodies in blocks of color, the chorus in black silhouette, and movement was mostly in abstract relationship to the music, much like balletic choreography. No emotive pulse of Mozart’s score was left without a correspondence of position or movement, and this transported us to the depths of decorative 18th century music. And very great musical pleasure.
Scarpitta most often envisioned the famous arias as ensemble statements, not just of singer and wind instrument, but of the singer amongst all the other singers on the stage, the meanings becoming more overtly public. The famous trio “Soave sia il vento” was a musical expanse of frozen emotion, its breezy triple meter only enough to reposition a feeling. Duets were synchronized exposition of studied movement, never broken nor forced. Time stood still.
Italian soprano Erika Grimaldi gave clear, rich, Italianate voice to Fiordiligi, well able to maintain her fine technique from prostrate positions, French mezzo Marianne Crebassa boasts elegant technique and has an innate sense for elegant movement. Scarpitta (as the general director of the Montpellier opera at the time the opera was cast) placed the more important vocal and musical responsibilities for his production on these two roles — as has Mozart.
American tenor Wesley Rogers as Ferrando however was quite alone on stage to sing his “Un’aura amorosa del nostro tesoro,” his insecure technique illuminating the vulnerability of his character. Tyrollean baritone AndrÈ Schuen moved and sang with innocent grace as Guglielmo. Italian bass Antonio Abete brought grizzled elegance and aged vocal cynicism to the figure of Don Alfonso and French soubrette Virginie Pochon was a used-up, seen-it-all Despina who reenforced Don Alfonso’s disaffection for youth.
Director Scarpitta quickly downplayed the minimal dramatic outline of da Ponte’s plot by demonstrating very early on that basic sexual instincts superseded any emotional loyalty (there was lots of pawing). This directorial insight however undermined the a development of character that could support the intense lyricism of the second half of the opera. It was here that the evening became long, very long, and the maestro’s musical probings fell upon deaf ears. 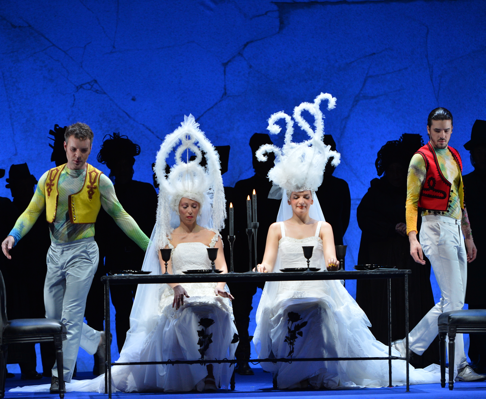 Photo by Marc Ginot / OpÈra national de Montpellier
Scarpitta ended his Cosi fan tutte with the utter physical disruption of its nuptial banquet and emotional disarray of its protagonists, much as Scarpitta had ended his Don Giovanni by having waiters, da Ponte’s demons, destroy the Don’s final banquet, leaving its survivors bewildered. Both banquets were the symbolic feasts of young love feasting on itself. Both ended in the deceptions of mature human values, and emotional bewilderment.
This Mozart da Ponte cycle was a stellar achievement, and majestically crowns Jean Paul Scarpitta’s fifteen years at the OpÈra de Montpellier.
Michael Milenski
Links to Mr. Milenski’s reviews of the Montpellier Giovanni and Nozze:
Don Giovanni in Montpellier
Les Noces de Figaro in Montpellier