Dread memories of Christof Loy (Tristan
and Lulu,
here in London, still more his unspeakable
Salzburg travesty of Die Frau) made me wonder afterward whether I
had shown undue clemency, but no: almost two days later, I am still reeling
from the impact of so extraordinary a performance, one which no house in the
world could conceivably improve upon, and which I doubt could even be matched.
For whilst Claus Guth’s production had many virtues, which I shall come to a
little later, it was Strauss’s astonishing, still widely misunderstood, score
which, rightly, had pride of place. If any performance, anywhere in the world,
does more for his cause in this anniversary year, I think I shall find myself
in need of a new vocabulary of superlatives. 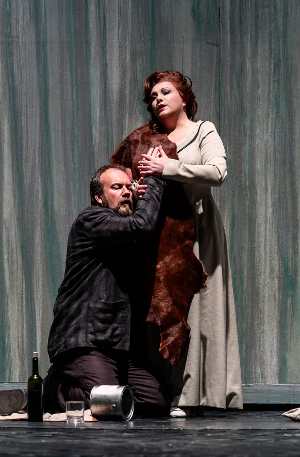 Johan Reuter as Barak and Elena Pankratova as Barak’s Wife

Above all, I must commend Semyon Bychkov and the Orchestra of the Royal
Opera House. The very first time I heard this work was in 2001, the final
outing of John Cox’s Royal Opera production, with celebrated designs by David
Hockney; Christoph von Dohn·nyi’s conducting of the orchestra remains one of
the finest I have heard of a Strauss opera. Then, I found myself lost in
admiration both for his and for this orchestra’s achievement. Bychkov proved
himself every inch Dohn·nyi’s equal; indeed, I am not entirely sure that he
was not surpassed. No matter: it is not a competition. Bychkov’s command of
the orchestra was nothing short of awe-inspiring. If in retrospect, the first
act seemed seemed a little on the expository side, then that is surely a
reflection of Strauss’s writing. Patiently building up not only the dramatic
tension but the motivic material from which the score would truly, ravishingly
blossom, Bychkov showed himself possessed in equal measure of an ear for colour
so acute as almost to rival Boulez — now imagine a FroSch from him!
— with the deepest of structural understanding. Horizontal and vertical
presentation of the score offered in conjunction with voices and staging a
three-, even four- dimensional performance to rival that one sees in one’s
mind when hearing Karl Bˆhm on CD. And if the Covent Garden did not sound
quite with Bˆhm’s Viennese sweetness, it had phantasmagorical qualities all
of its own: the refreshment of a true rival rather than the flattery of
imitation. More than once, I found myself thinking, doubtless heretically:
Klangfarbenmelodie! Strauss’s uncomprehending disdain for the
‘atonal’ Schoenberg notwithstanding, we did not stand so very far from the
world of the latter’s op.16 Orchestral Pieces. Bychkov’s ear for
combining musico-dramatical tension in the combination of sonority and harmonic
tension ensured that we must think of him as not only an excellent, but a great
Straussian.

And then — the singing! That earlier Covent Garden performance had also
marked my first encounter with Johan Botha. He proved at least as remarkable
more than twelve years on. This Emperor, as mellifluous as he was vocally
powerful, sounded every inch a Siegfried, and a golden age Siegfried at that.
(If indeed such an age ever really existed.) Emily Magee had a few moments of
relative infallibility, but by any reasonable standards, her Empress was an
impressive achievement, all the more so given the wholehearted dramatic
commitment offered in conjunction with the purely vocal. Elena Pankratova was
making her Royal Opera debut as Barak’s Wife; hochdramtisch singing
of the highest order was to be savoured here, her climaxes at the end of the
first and second acts sending shivers down the spine. If Johan Reuter’s Barak
at first sounded a little plain, that may as much have been character-portrayal
as anything else; his performance grew into something genuinely moving,
testament to the potential greatness of, as it were, Everyman (to borrow from
Hofmannsthal’s future). As for Michaela Schuster’s Nurse, her offerng of
musical and dramatic malevolence — tonality on less the pre- than the
post-Schoenbergian brink, though never beyond it — would have been an object
lesson in itself, even had it not been heightened by such stage presence and
intelligence. Smaller roles were almost all impressively handled, David Butt
Philip’s attractively voiced Apparition perhaps especially worthy of note.
The only disappointment was the tremulous Falcon of Anush Hovhannisyan. Renato
Balsadonna’s Royal Opera Chorus was, as expected, excellent throughout. 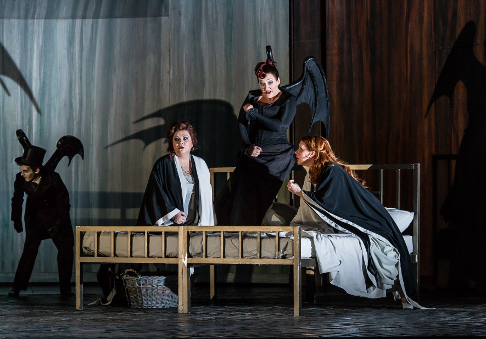 Guth’s staging, first seen at La Scala in 2012, presents the Empress in a
sanatorium, Christian Schmidt’s stylish designs highly evocative of the time
of composition. Our heroine is, one might say, hysterical in every sense. To
begin with, she — and we — are somewhat unclear concerning the boundaries
of reality and dream. Is Freud being channelled or satirised? Unclear, and all
the better for it, which renders the very ending, in which it appears ‘all to
have been a dream’ something of a disappointment. That said, much of what we
see in between is riveting. With the best will in the world, some of
Hofmannsthal’s symbolism upon symbolism — The Magic Flute really
is best left alone — can seem unnecessary; it certainly seemed — and seems
— to do so to Strauss. Yet the poet’s idea of transformation gains a fair
hearing, or rather viewing, and there is a proper sense of the mythological,
even the fantastical, to the dreamed world we enter, never more so than at the
spectacular close to the second act, Olaf Winter’s lighting crucial here, and
the craggy opening of the third. Those problematical echoes of Tamino and
Pamina’s trials are presented with greater visual conviction than I can
previously recall — and indeed greater conviction than one often sees in
productions of the ‘original’. The sheer weirdness but also menacing sense
of judgement emanating from a courtroom of strange creatures close to the end
not only testifies to imagination and its possibilities but also to the
misogynistic pro-natalism, from which, try as we might, we cannot ultimately
rescue the opera. By contrast, Loy
in Salzburg arrogantly declared that the work did not interest him and made
not even the slightest attempt to deal with it. It was the sort of thing that
might appeal to those who do not care for Strauss, or indeed Hofmannsthal, in
the first place, though even they would most likely have been bored to tears
with the banal ‘alternative’ narrative presented. Guth, for the most part,
successfully treads a tightrope between presentation and interpretation.

A good staging then, and a truly outstanding musical performance. My first
act upon returning home was to visit the Royal Opera House website, to buy
myself another ticket. Hear this if you can. The performance on 29 March will
be broadcast live on BBC Radio 3 at 5.45 p.m.