Actually it was not Chernobyl, the tip-off being the 7 meters diameter tractor wheel, mud hanging off of the lower treads. Then a thrown-away tuna fish can crashed onto the stage and rolled center, from which emerged Belcore with the old trick of how many whatever-they-weres could possibly emerge from a tuna fish can. We indeed had delighted smiles on our faces.
This was the lilliputian Elisir d’amore! Tiny, magical creatures acted out this bit of sentimental commedia del’arte residue underneath a wheat field somewhere in Switzerland (the production comes from Lausanne). Given it was magical the Belcore creature was part Samurai (the wig) and part Swiftian general. Dulcamara arrived atop a contraption that was totally fantastic, maybe a sort of rolling still though he seemed some sort of crazed Swiftian magistrate in his red robe and weird wig.
It was a splendidly realized concept. The slender wheat stalks could actually be scaled, and were by five or so acrobats evoking wonder amongst us spectators. For some reason there was a boy and girl, eight year olds maybe, who rushed on stage from time to time to act out bits of puppy love. Besides the rats, birds as well as a life sized horse, i.e. about ten meters high (all we could see were the legs), meandered across the back of the stage usually during the arias and duets — the wonders of very skillful projections. 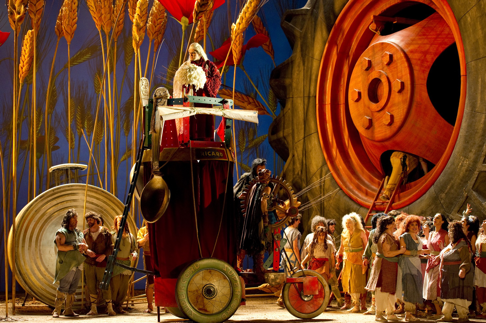 Dulcamara atop his wagon, tuna fish can, tire and wheat. Photo courtesy of the OpÈra de Monte-Carlo
What, you may ask, has all this to do with Donizetti’s opera? The answer is nothing. It was an extravaganza of concept and hard-headed exploitation of contemporary digital techniques. Placed on the stage by a team of Italians, stage director Adriano Sinivia, set designer Christian Taraborrelli, and costume designer Enzio Iorio this was a stand alone theater piece that used a bel canto masterpiece as an excuse to imagine a far-fetched digital video game.
Donizetti’s opera is neither a fairytale for children with hidden meanings for adults nor a Swiftian satire of rural morality. It is a simple love story told very directly — love overcomes all obstacles if you sing well enough and long enough. Actually the cast assembled by the OpÈra de Monte-Carlo did sing well enough but even so could not overcome the obstacle of this production. It was a long evening that left us indifferent to all this sophisticated human talent and effort.
While the OpÈra de Monte-Carlo had the esteemed Orchestre Philharmonique de Monte-Carlo in the pit it had French contralto Nathalie Stulzmann on the podium who had not a clue about bel canto musicality — a musicality that allows time to stand still so you can elegantly feel how you feel. Define it how you may it will never be driving the music hard and fast with an authority that is above that of the singers. Musically the evening was a willful display of conductorial insensitivity. 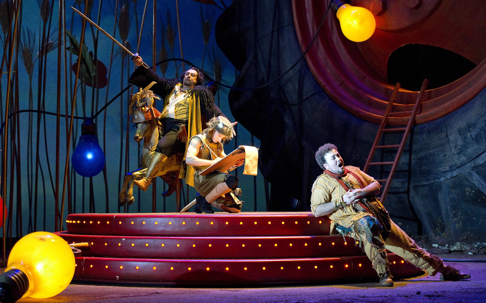 George Petean as Belcore, Stefan Pop as Nemorino. Photo courtesy of the OpÈra de Monte-Carlo
It is enlightening to know that Angela Gheorghiu is not the only singer to come out of Romania. The OpÈra de Monte-Carlo found three more excellent artists. Twenty-eight year-old tenor Stefan Pop made a roly poly Nemorino who gave a skillful account of his aria — maybe the only moment of the evening not sabotaged by directorial gloss — and in general convincingly portrayed a country bumpkin with a sophisticated vocal technique. Baritone George Petean was a roly poly Belcore who gave it his all though it seemed too much, fault maybe of his silly wig or his feeling that his was a hopeless character in this lilliputian satire so he had to try to make something of it. Bass Adrian Sampetrean on the other hand rose above his ridiculous wig and assumed a genuine authority that you probably do not want from this shyster, fault maybe of the conductress who did not try to reign him in to become Donizetti’s charming con man.
Italian ingenue soprano Mariangela Sicilia was the spunky, too spunky Adina who sang quite well, though her knowing attitude and knowing vocal technique is not yet finished to the degree that she can settle with confidence into character and sail securely above it all with unflappable technique. It will come. The Giannini of Parisian soprano Vannina Santoni was a larger than usual character and an appreciated component of the larger ensembles.
It was unclear whether the generous applause was relief that it was over, appreciation of good singing, or evidence that the Monegasques (those who reside in Monaco) are willing to reward even bad conducting.
Michael Milenski