His nemesis, Master-at-Arms John Claggart, played by the equally charismatic Greer Grimsley, hates him because of it. The director could have introduced a homoerotic element of hatred born of rejection, but she chose not to. Instead, the evil Claggart is a first cousin to Verdi and Shakespeare’s Iago.
Herman Melville’s works have become the basis for two modern operas, Benjamin Britten’s 1951 Billy Budd and Jake Heggie’s 2010 Moby Dick. When Melville died in 1891, he left the novella Billy Budd unfinished, so it was not published until 1924. His first biographer, Raymond Weaver, unearthed its manuscript when he read through Melville’s papers. In 1951, a play made from the novella by Louis Coxe and Robert Chapman was a major success on Broadway. That same year saw the premiere of Benjamin Britten’s opera, which has a libretto by English novelist E. M. Forster who worked with frequent Britten collaborator, Eric Crozier. 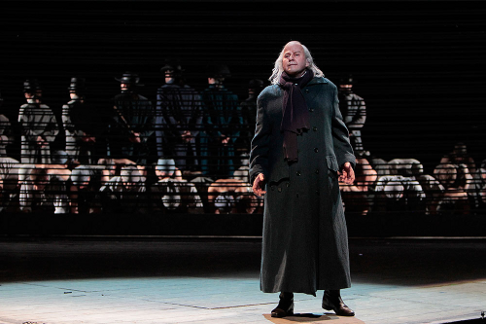 Richard Croft as Captain Vere
The title role was intended for Geraint Evans, but he found its tessitura too high. At the opera’s monumentally successful premiere at Covent Garden on December 1, 1951, Theodore Uppman sang Budd and Evans sang Mr. Flint. The performance received seventeen curtain calls and rave reviews.
The current Los Angeles Opera production by Francesca Zambello was first seen at London’s Covent Garden on May 30, 1995. Los Angeles Opera originally mounted her austere, relatively traditional production in 2000 and brought it back on February 22, 2014, under the direction of Julia Pevzner. Alison Chitty’s set is a steeply raked, angular deck that can be raised to reveal a crew area below. Above the deck is a slanted mast with an arm that becomes reminiscent of a cross when Billy stretches his arms out on it.
Billy, portrayed by handsome lyric tenor Liam Bonner, is a charismatic embodiment of innocence. His nemesis, Master-at-Arms John Claggart, played by the equally charismatic Greer Grimsley, hates him because of it. The director could have introduced a homoerotic element of hatred born of rejection, but she chose not to. Instead, the evil Claggart is a first cousin to Verdi and Shakespeare’s Iago.
Caught in the middle of this drama is the ship’s captain, Vere, beautifully sung and movingly interpreted by Richard Croft. He is seen as an old man in both the prologue and the epilogue. He is still uneasy looking back on his role in Billy’s conviction and execution at sea for assaulting a superior officer. That is Britten’s way of expressing his discontent with the harsh laws of wartime. This production pulled the drama taut and propelled the action forward. Many singers created notable character portrayals in this performance. Greg Fedderly was a raucous Red Whiskers, James Creswell a wise Dansker, and Anthony Michaels-Moore an obsequious Redburn. Members of the Los Angeles Opera chorus sang with precise harmony while making the audience realize how many hundreds of men it took to man sailing ships.

Although the opera does not send the audience out humming its tunes, it is consummate music drama and the orchestra makes the audience feel Billy’s pain when he is betrayed. Britten’s sophisticated musical structure sets the listener up for the coup de grace, Billy’s inability to speak at the crucial moment and his resulting assault on Claggart. The composer has created an evocative phrase for each thing that happens in the opera and conductor James Conlon brought them all out with the brilliant colors and the stark clarity of the score. Conlon was the prime mover for bringing more Britten to Los Angeles and with this performance he demonstrated the powerful emotional appeal of that composer’s work.
Maria Nockin