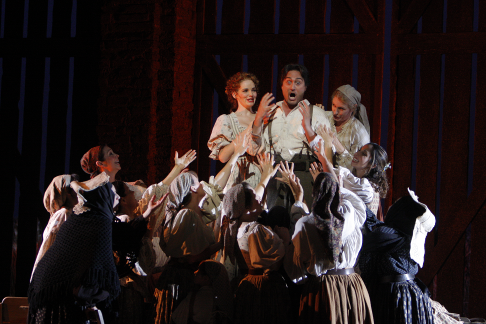 Giuseppe Filianoti as Nemorino with chorus
As Nemorino, Giuseppe Filianoti was a lovable, totally unsophisticated country boy who gets into some thoroughly amusing slapstick situations. He looked adorable and proved to be a fine actor, but at this performance his intonation was a serious problem. The Adina, Tatiana Lisnic had no such drawbacks. She hit all the notes correctly while giving a passionate portrayal of the young, attractive landowner. Remember her name. She is a fine talent from whom more great performances can be expected. I hope she will soon again sing in California.
This edition of the score gave Adina’s friend Giannetta more music than usual to sing and Stephanie Weiss sang it to good advantage. Malcolm MacKenzie has a powerful baritone voice with distinctive colors and it underscored his amusing portrayal of the strutting, self-important Sergeant Belcore. Kevin Burdette was a rather different Dr. Dulcamara. Instead of the usual portly basso buffo, this patent medicine salesman was tall, lean, and always ready to run away when someone started to uncover his larcenous ways. He sang with robust tones and his fast patter was a joy to hear.
Charles Prestinari’s chorus sang with delightful harmonies as they moved in small groups to give the impression of farmers, soldiers and townspeople. American conductor Karen Kamensek, music director of Staatsoper Hanover, is a powerhouse on the podium. She opened with brisk tempi and kept the performance moving. The comedy never lagged but the singers always had the leeway they needed to be at their best. She is a fine addition to San Diego Opera and I hope they will have her back soon. Although this was not a perfect performance, it was a a good one that kept the audience interested and amused for a wonderful Sunday afternoon.
Maria Nockin