Pasquale was an aging movie idol from the silent picture era who had been very famous at one time. In the nineteen fifties, however, he was living in an aging mansion on Sunset Boulevard that was as devoid of color as his old black-and-white films.
Gaetano Donizetti’s Don Pasquale is an opera buffa or comic opera with a libretto by Giovanni Ruffini and the composer based on the text that Angelo Anelli wrote for Stefano Pavesi’s earlier work Ser Marcantonio. In the tradition of opera buffa, the opera makes reference to the stock characters of the Commedia dell’arte. Beginning in the sixteenth century, the Italian Commedia usually involved improvised performances of simple sketches. Actors and actresses were usually professionals and they generally specialized in portraying one particular character. Actually the popularity of the Commedia did much to gain the right to perform on stage professionally for women because men did not portray the female characters. As with the show pictured in Ruggero Leoncavallo’s Pagliacci, most performances took place outdoors on temporary stages with minimal scenery. 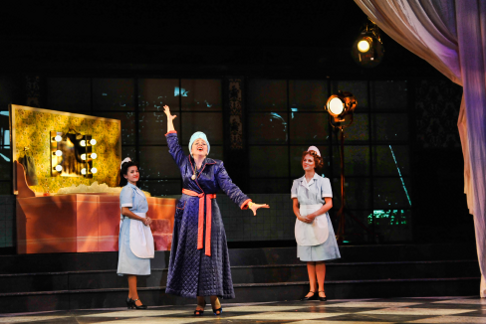 Andrea Shokery as Norina the Hollywood starlet [Photo by Ed Flores]
The characters of the Commedia usually represented common social types such as foolish old men, handsome young lovers, beautiful, calculating young women, and devious intermediaries. In Don Pasquale the title character is a foolish old man, Ernesto a handsome lover, Malatesta a wily intermediary, and Norina a beautiful young woman who is in on Malatesta’s scheme. The use of a false notary is a common operatic device also found in Mozart’s Cosi fan tutte.
On April 12, 2014, Arizona Opera opened its series of performances of this opera in Tucson instead of Phoenix and there we enjoyed the slower tempo of Southern Arizona. Chuck Hudson’s production of Don Pasquale combined Commedia dell’arte with Hollywood movie history. Pasquale was an aging movie idol from the silent picture era who had been very famous at one time. In the nineteen fifties, however, he was living in an aging mansion on Sunset Boulevard that was as devoid of color as his old black-and-white films. His ward and nephew, Ernesto, having refused to accept an arranged marriage, proclaimed his love for an attractive Hollywood starlet named Norina. Therefore, the outraged Pasquale decided to disinherit the young man and beget his own heirs. To do this he needs a wife, however, so he calls on a family friend, Malatesta, to help him find one. 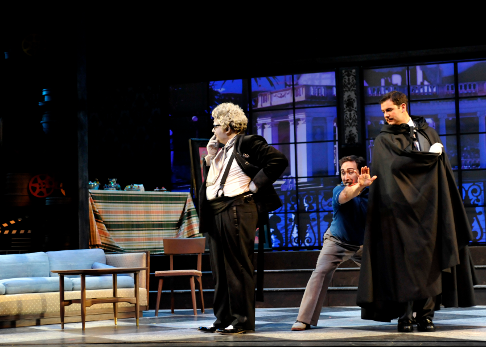 Craig Colclough as Don Pasquale, David Margulis as Ernesto, and Chris Carr as Malatesta [Photo by Ed Flores]
From there the plot of this production differed very little from traditional renditions of the opera. Craig Colclough was a thoroughly amusing, fast singing Don who eventually laughed at his own foibles. He was the only singing member of the cast who was not a member of Arizona Opera’s Marion Roose Pullin Studio. For the young Studio Artists this was their time to shine and that is exactly what they did. Andrea Shokery was a hysterically funny Norina who sang accurately while kicking up her heels. The sound of David Margulis’s tenor voice was honey for the ears. The audience knew Ernesto would get the girl in the end, but they suffered with him on the many occasions when comic obstacles got in his way. Baritone Chris Carr, who can spit tonally accurate patter like a machine gun, was a contentious Malatesta who enjoyed stirring up a hornet’s nest. As the false notary, Calvin Griffin amused us with his antics.
Conductor Gary Wedow used rubato to readjust some of the rhythms of the overture, and with the small orchestra playing this performance, it tended to change some of the music’s free flowing melodies. Henri Venanzi’s chorus, many of whom were dressed as specific old time Hollywood stars, sang in exquisite harmony while they posed for cameras. Wearing Kathleen Trott’s costumes, the audience recognized the characters immediately. One of the most amusing portrayals was silent. Ian Christiansen, the Don’s fascinating, formally dressed Manservant, seemed to glide rather than walk across the room as he added to the old fashioned glamor of the mansion. This was a well thought out updating and it worked to make this nineteenth century opera a great piece of twenty-first century entertainment.
Maria Nockin