That the orchestra and chorus performed magnificently, tirelessly, must be attributed to the exceptional inspiration from conductor Markus Bieringer. The young Maestro elicited the best playing I have yet heard from this resident orchestra, and he was able to turn his forces on a dime as the tempi and emotional content changed frequently, from recitative to choral statements, to dances, to miniature ariosos, to full-blown scenas, he served up each musical moment with precision, depth and stylistic acumen. Ulrich Nolte’s chorus was also meticulously prepared: accurate, impassioned, and totally committed to the drama. Maestro Bieringer’s concentration and command of Gluck’s richly complex score never faltered, making this reading one of the most inspired (and inspiring) operatic performances in my recent memory.
In the taxing title role, Adelheid Fink offered an assured and persuasive interpretation. Her plangent soprano is freely produced, and her slightly grainy timbre was well suited to the French style. Moreover, she was able to meet all the wide-ranging demands requiring varied vocal delivery, as well as suitably embody the shifting emotional state of the troubled heroine. IphigÈnie is a Big Sing, and Ms. Fink’s distinguished, indefatigable achievement proved an auspicious role assumption.
Melanie Lang is a real company asset, showcased here as a musically well-schooled Clitemnestre. Her pliant lyric mezzo easily encompasses the role’s requirements, and when Ms. Lang gets up a head of steam she can effectively introduce just the right weight and hint of steel (especially at the top), to fully command the ear as well as the stage. Bernd Valentin brought a towering presence to Agamemnon. His burly, burnished baritone was deployed with skill and conviction and he maintained admirable control even during the king’s most anguished outbursts. He also nearly peeled the paint off the ceiling with one hurled, high invective that was as astounding for its security as its sheer power. Mr. Valentin’s was a masterful portrayal. 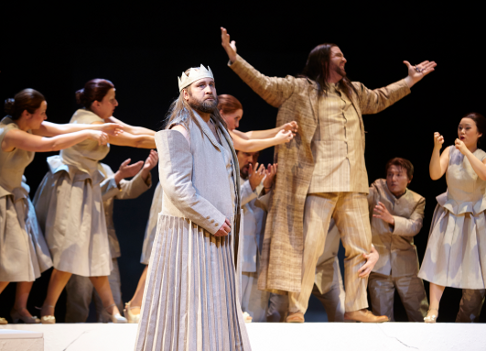 Bernd Valentin as Agamemnon and Michael Hauenstein as Kalchas with chorus
Bernhard Berchtold sports exactly the kind of tenor needed for Achille: sweet-voiced, comfortable well above the staff, meaty enough to fill the hall, yet flexible enough to serve the more florid aspects of the piece. An early climactic high note almost came to grief (and did not thanks to sheer willpower), but once past that hurdle Mr. Berchtold’s singing just seemed to go from strength to strength, complemented by a stage deportment that was sincere and natural. Michael Hauenstein’s Calchas proved to be a fine complement to Valentin’s Agamemnon. Mr. Hauenstein’s voice is a bit rounder, a bit more modulated, but every bit as ‘present.’ His devious characterization, smooth phrasing, and sly vocal inflections ably embodied Calchas’ bent for crafty manipulation. In the smaller role of Arkas, Alexis Wagner showed off an orotund bass of substantial weight and accomplished training.
The visuals of the physical production were exceptionally rewarding. Smaller theatres with fewer resources sometimes make the mistake of trying to be too avant garde, even garish, but here we were blessed with a well-coordinated, finely detailed, cleanly appealing look from a talented design team.
Anna Kirschstein’s setting features a large arch that is lying in state, toppled by an unseen force. The sturdy construction allows for it to function as a seating area, stage platform, barrier, pathway, and other multi-functional purposes. The playing space is backed by a handsome, neutral drop made up of a collage of earth-toned vertical slats of wood. This “wall” can also split to reveal a cyclorama, trees, projections and a profusion of stage smoke to accent the story. 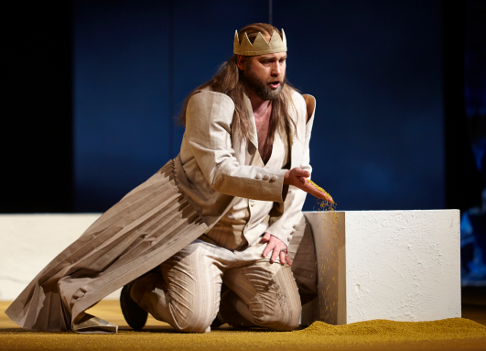 Bernd Valentin as Agamemnon
In Act Two when the wedding is about to take place, the massive structure flies up, forming a ceiling of sorts, while leaving a fragmented piece of “ruin” on the ground. The underside of the suspended edifice is cleverly outfitted with internal lighting that floods down on center stage. Harald Zidek’s lighting design is generally very good, and he makes excellent use of cross fades and specials. There are also exciting effects that find the cast momentarily back-lit against the cyc. I would only hope that Mr. Zidek could clean up a few key moments when people were soloing in the dark.
Stephan Rinke’s fanciful costumes seemed loosely based on classical styles but re-interpreted with visual riffs on the silhouette. Unusual folds and pockets figure prominently in Mr. Rinke’s concept. Clitemnestre’s gown was particularly characterful and inventive, with sassily inverted pleats almost suggesting a farthingale effect. The chorus ladies’ knee-length peasant attire had smaller, similar ruffles around the waist. The royal men were generally in long jackets, almost tunics. Stephan chose exciting fabrics in variations of browns and creams, which incorporated complex textures and degrees of refinement that were helpful in powerfully establishing the characters’ station and relationships. Even Agamemnon’s obligatory pointed Euro-production crown was made of appropriate fabric, and all attire was exceptionally well-tailored and carefully accessorized. Hair, wigs and make-up were stylish and well-considered, and there was an imaginative use shoes that found the leading lady changing out (or abandoning) several pairs as she goes through character transitions. Too, I liked the contemporary red hair weaves that were shared by Clitemnestre and her daughter. The overall look was a classy, unified, timeless vision which proved to be a handsome workable concept as well as a bold artistic statement.
Stage director Benjamin Schad for the most part created blocking motivated by the character developments. He crafted numerous memorable pictures, such as an extended introspective moment with IphigÈnie on the ground in fetal position; a cat and mouse game that communicated well the lovers growing trust and attraction; a tense confrontation scene that underscored the crackling tension between Agamemnon and Calchas; and a particularly moving segment that found the daughter cradling and comforting her distraught mother. I applaud Mr. Schad for moving the chorus with clarity and purpose, all the while allowing them to focus on singing cleanly. They were so well rehearsed that I could forgive the few times that the groupings yielded more calculated choral posturings than dramatically involved characters. 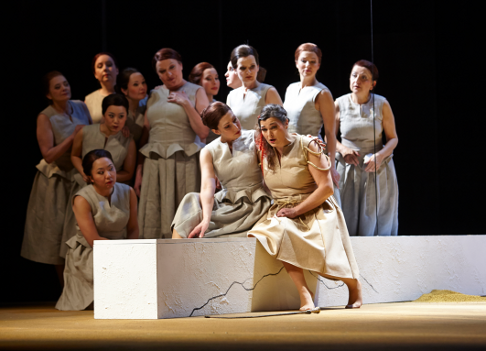 Adelheid Fink as Iphigenie with women’s chorus
Very infrequently, strange positioning threatened dramatic effectiveness. Early in the second half, creation of stage picture trumped visibility of the star, and IphigÈnie spent an extended scene far upstage right, behind a seated (and non-singing) Clitemnestre, when the scene would have worked as well with the star prominently down right. Minor carping aside, the production scored an affecting ‘coup de theatre’ with a tacked on ending not of Gluck’s creation.
During the original finale toy swords are passed out and the cast play acts at going to war as is presaged in the text. Then, to added instrumental music the toy swords are collected and placed in a pile like so much firewood at the front of the stage where IphigÈnie and Clitemnestre are perched on the lip. Then as the chorus sings a unison militant anthem, realistic rifles are passed out, and the assembled forces exit upstage, ultimately in silence, marching relentlessly into a brutal conflict, backlit through swelling smoke, as the two leading women stare helplessly forward into the void during a slow fade to black. I don’t usually approve of tinkering with the composer’s intent, but since none of the original music was violated (merely added to), this was a stunning final impression.
The smallish audience clearly knew that they had just experienced something very special and lavished the performers with extended, heartfelt acclaim. Indeed, the only bad thing to report is the attendance figures. Ticket sales to date have resulted in small houses. Perhaps it is because the title is unfamiliar. Too bad, because IphigÈnie en Aulide is a significant achievement and deserves to be seen. It is not often we get a chance to see this piece at all, much less in such a thrilling performance.
James Sohre