With its scuffed floors, grubby whitewash and exposed pipes,
this dimly lit ‘contemporary arts venue’ has all the charm of an
underground car park. Sadly, it has the acoustic of one too, which makes for
problems a-plenty for the cast of Thomas AdËs’ Powder Her Face.

The opera depicts the decline of Margaret, Duchess of Argyll, the infamous
British socialite whose shameful ill-repute followed a 1963 divorce case
against her second husband, the 11th Duke of Argyll, featuring
indecent photographs and scandalous accusations. For English National Opera’s
new production in the infernal cave of Ambika P3, the audience is seated in
raked wooden tiers, on three sides of the central stage. The concept is clear:
director Joe Hill-Gibbins has made us part of the show, first tabloid
rubberneckers, greedily relishing the Duchess’s crimes and misdemeanours,
then courtroom observers self-righteously witnessing her disgrace and
punishment. 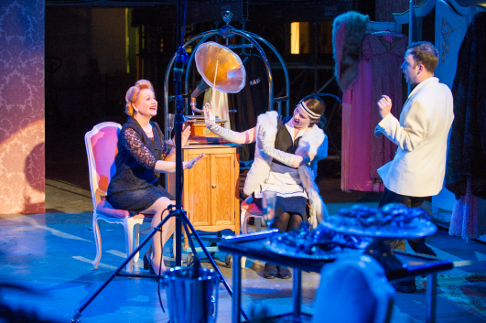 Amanda Roocroft as the Duchess, Clare Eggington as the Maid and Alexander Sprague as the Electrician

In this spirit of voyeurism — Jay Scheib’s New York City Opera
production of February 2013 adopted a similar approach — cameras and
cameramen are ubiquitous, salaciously snapping the Duchess’s moral
transgressions. And, we are morbidly complicit; as becomes more explicit in
Scene 6, when Maid and Electrician, in the guise of scandal-seeking plebs
(baseball caps, outsize sunglasses and lurid green anoraks) take their places
amid the audience in the courtroom gallery. (In fact, it seems rather ironic
that an opera that satirises both aristocratic debauchery and the grim
prurience of the hypocritical Establishment and baying populace, should itself
have become a succËs de scandale (Classic FM considered it unsuitable
for transmission) for its operatic fellatio.

Tacky polaroids and web cams flash on the wall high above us, and serve a
useful practical purpose, delineating the plot in the absence of surtitles.
For, despite their best efforts, the casts’ consonants are unable to cut
through the venue’s reverberating boom. Hill-Gibbins and Movement Director
Imogen Knight thoughtfully position the protagonists around the traverse, but
inevitably as soon as a back is turned the words vanish.

AdËs’ score thus has to tell the tale, and the panoply of parodic
pastiches that it offers certainly paints deft mood pictures. Accordion,
saxophone, even fishing reel, are all called into service to delineate the
Duchess’s downfall and the world of hedonist indulgences that she forgoes.
The selected instrumentalists of the orchestra of English National Opera who
form the chamber ensemble produce fantastic playing of verve and wit. Conductor
Timothy Redmond is an experienced proponent of this score and draws forth both
its jazzy sleaziness and lugubrious anxiety. Unfortunately, placed to one side
of the alley stage, the loud instrumental brassiness is rather unyielding,
another over-powering obstacle to the singers’ audibility.

Designer Ultz dangles a paste chandelier aloft and summons a suitably
dissolute air of shabby chic. The Duchess’s boudoir is a fading monument to
sugary excess: salmon pink drapes, plump padded cushions and silky fleck
wallpaper. But, it’s all more sordid than sensual; louche rather than
luxurious. The scenes move swiftly, charting in flashback and by flashbulb the
Duchess’s dissipations. But, as the dozen silent actors who rush around with
measuring tape and microphone, gathering evidence and filming the unsavoury
proceedings, the stage area becomes ever more cluttered: to plush chairs and
dishevelled double bed are added hotel dining room (with palm trees and
towering plates of crustacean cuisine), mauve enamel bathtub (with gold dolphin
taps) — not to mention a multitude of looming lenses. It all begins to
resemble Tracey Emin’s ‘My Bed’, the detritus charting the embarrassing
carnage of the Duchess’s past. Indeed, the various leftovers of a life do
indeed become labelled exhibits during the court proceedings in Scene 6.

Amid this dingy dÈcor and disarray, the four principals are uniformly
superb. Taking the multi-roles of Maid-Confidant-Mistress-Journalist and
Electrician-Lounge Lizard-Waiter-Delivery Boy, soprano Claire Eggington and
tenor Alexander Sprague respectively surmount the technical challenges with
expertise and energy. Eggington assails the score’s stratospheric gabbling
with aplomb; her intonation is unfailingly spot on, and her agile, bright
coloratura never shrill — it’s just a pity that she is defeated by the
resounding boom. 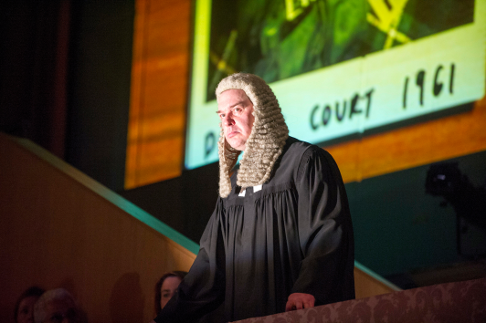 Alan Ewing as the Hotel Manager

Entering from the staircase, with all the pomposity of a drag queen diva,
the fur-coated, bewigged Sprague demonstrates a theatrical exuberance which is
matched by his engaging, flexible tenor. Clean of tone and varied of colour,
Sprague is an intelligent performer, and proved highly alert to the musical and
dramatic comedy.

Bass Alan Ewing, as Hotel Manager-Duke-Judge, is astonishing as he employs
every shade and nuance of his capacious voice to convey character and mood. His
appearance as Judge, a black spectral monster presiding aloft, was a wonderful
coup de thÈ‚tre and this aria the musical highlight of the evening.
Ewing’s magisterial pronouncements in a sinister low register accompanied by
cynical brass fanfares were chilling (they reminded me of Jan·?ek’s
Sinfonietta which, oddly, was used as the theme tune for Crown
Court, a Granada Television drama series broadcast during the 1970s!).
Ewing can float a falsetto too; controlling wide registral leaps with technical
assurance, he created an unease which was enhanced by instrumental
glissando squeaks. AdËs’ score in this scene has a visceral
intensity. The Judge’s verdict that ‘She is a beast to an exceptional
degree’ is accompanied by a savage orchestral pounding, evidence perhaps of
the veracity of his conclusion that the Duchess is ‘insatiable, unnatural and
altogether fairly appalling’, but also of the shocking patriarchal oppression
and abuse latent in his declaration that the ‘Duke has no stain on his
character. I pity him for the mistake he has made, which frankly any of us
might make’.

Similarly striking was Ewing’s appearance as the Hotel Manager in the
final scene (set in 1990), when he was coldly dismissive of the Duchess’s
distress as her life is dismantled, the debris piled high. Ewing’s wonderful
descending glissando, plumbing the depths, was complemented by the
emotions suggested by the orchestral shadows, the unsettling sequences of
chords evoking the elusive ‘interview chords’ of Britten’s Billy
Budd. 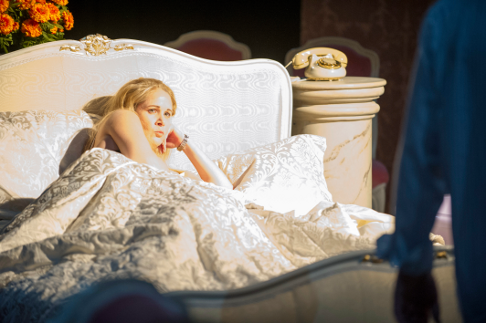 Claire Eggington as the Maid

In the title role, Amanda Roocroft was totally committed, offering an heroic
performance — not least when forced to wear a black lace body suit and when
performing the notorious sex act. Presented throughout in aging decline, she
watched scenes from her past play out before her, creating a sense of emotional
estrangement. Roocroft’s Duchess had both hauteur and weariness. Her
dismissive response to public condemnation — ‘So that is all. I am judged.
I do not care’ — was powerfully eloquent in that it conveyed the sincerity
of her contempt, enhanced by searing trumpet sneers at the close. Perhaps the
closest we come to feeling pity for the monstrous Duchess is in Scene 7 (set in
1970) when the shamed aristocrat’s disdainful rejoinder, ‘I never touch
money. … I have no need to. Cash is wearying and cash is soiling’, is
juxtaposed with a visual crystallisation of self-delusion at the end of the
scene, as the Duchess desperately tears up her enormous, unpaid hotel bill. She
is surrounded by men in various states of undress, stationed motionless, as
string glissandi and the garish green glow create a mood of unreality
and alienation. The whining instrumental mockery builds through a startlingly
strident crescendo; she is both defiant and defensive.

Roocroft’s breakdown in the final scene was shocking. A sole chair
remains, a symbol of loneliness which is enhanced by the cold open intervals of
clarinets moving in parallels, the lines lagging rhythmically. As she
frantically slaps rouge upon her lips, the cosmetic stick breaks, like the
illusions which have sustained her; she violently smears and daubs as the brass
section’s curling lines deride, the vacuity of her life painfully embodied in
the empty, broken atomiser of her favourite perfume, ‘Joy’.

AdËs’ technical precocity — he was just 24-years-old when the opera was
composed in 1995 — and easy mastery of parody and pastiche reminds one of
Benjamin Britten, to whom the composer was frequently compared during his early
career. In Powder Her Face, the relentless parodies become a bit
wearisome — the stylistic sophistication is impressive but there is an
emotional emptiness which begins to irk.

Although musically worlds apart, it seems to me that there are similarities
between AdËs’ opera and Britten’s Death in Venice, with its
composite roles and demeaned aging aristocrat; but whereas we are moved by
Gustav von Aschenbach’s humiliations, vulnerability and despair, it is hard
to feel pity for someone whose monstrous utterances betray a vicious racism and
arrogant snobbery. When the Duchess tells a journalist, ‘One never sees a
white face, not in the street, not now … Black men buy houses/ Jews go
everywhere’, we are hardly endeared. One might say that AdËs’ score and
its ‘star’ both have a heartless brittleness — much like the modern cult
of celebrity. The echoes of the Duchess of Malfi — ‘I am a Duchess
still’, Margaret of Argyll superciliously retorts to the onlookers who
cluster outside the court to witness her mortification — seem out of place
when the speaker has so little dignity and nobility. She is driven by poison
rather than passion; her final ‘mad scene’ has little pathos, for she is
shredded by a self-destructive solipsism not external oppression, and the dry
piano chords seem to mock the woman who has only pride and conceit to blame for
her demise.

That said, Roocroft and the other principals work unremittingly and show
indefatigable versatility. Ultimately, both the Duchess and her drama may seem
shallow, ugly and worthless, the opera merely a trifle depicting the idle rich
behaving badly. Yet, if there is little of moral value, Powder Her
Face is certainly an entertaining jeu d’esprit; and these
high-quality performances deserve a more helpful venue.