And unwelcomed. Take for instance the 2009 San Francisco installment which was the 2006 art deco version imported from L.A. Opera directed by Marta Domingo. Violetta, a flapper, arrived at the party in a Rolls Royce during the overture, and it was downhill from there even though the soprano was Anna Netrebko.
Just now in San Francisco there was a welcome surprise, and that was Verdi’s orchestral score made vividly present in moods and colors, rushes and hesitations, pianos and fortes, well, pianissimos and fortissimos. It was the high octane conducting of Nicola Luisotti that made Verdi’s first truly masterful score the star of the show. The pit was the sentient center of Verdi’s personal and deeply felt domestic tragedy.
Never mind that this intense emotional focus emanating from the seemingly inspired musicianship of a superb orchestra revealed Francesco Maria Piave’s (and one assumes Verdi’s) dramatic structure to be truly clumsy. Or that Luisotti’s ultimate acceleration missed the emotional beats of the opera’s final moments — the blow of the intense release was summarily trampled over — a not atypical Luisotti conclusion. 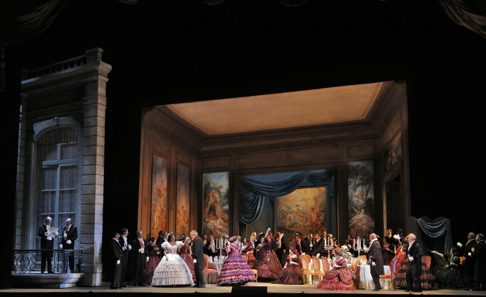 La Traviata, Act I. Photo by Cory Weaver, courtesy of San Francisco Opera
The reliable 1987 (twenty-seven years ago) San Francisco Opera production by John Copley was back on stage. It is definitely mid-nineteenth century in concept as required by Verdi, glowing in warm colors (the splendid lighting designed by Gary Marder). The wash of colors, the swish of lavish gowns, the brilliant red flash of the flamenco dancer, the weight of nineteenth century architecture were however at odds with the detail and precision emerging from the Luisotti pit, and the emotional depth of the score itself.
The cast was decidedly low octane, and intimidated by the conductor. The stage action by the principals was kept downstage center, looking not at each other while singing to one another but presentational, addressing the audience and most importantly remaining able to have direct eye contact with the conductor.
Soprano Nicole Cabell replaced the originally announced Bulgarian soprano Sonya Yoncheva as Violetta. Mlle. Cabell has previously proven herself a fine bel canto singer in San Francisco (Giulietta in Bellini’s I Capuleti ed i Montecchi) in an integrated production (musical and production elements were compatible). A fine singer and artist, here undirected, she struggled to dominate the stage as required of Violetta, and did not possess an energy or brilliance of tone to bring Violetta to vibrant life. She opted out of the optional E-flat in “Sempre Libera.”
Albanian tenor Saimir Pirgu has also proven himself in San Francisco as a bel canto singer (Tebaldo in Bellini’s I Capuleti ed i Montecchi). A fine singer and artist, vocally he cannot make the leap from easily fulfilling the demands of well-directed bel canto to the specific vocal and histrionic requirements of proto-realism roles (a larger, warmer voice and presence) or the higher powered vocal demands of mid- and late Verdi theater. 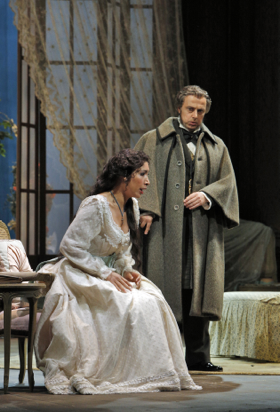 Nicole Cabell as Traviata, Vladimir Stoyanov as Germont. Photo by Cory Weaver, courtesy of San Francisco Opera
Bulgarian baritone Vladimir Stoyanov sang Germont. This esteemed artist possesses a quite beautiful voice, and more than Mlle. Cabell or Mr. Pirgu fulfilled the Luisotti musical vision. Yet he too seemed a too small vocal and histrionic presence on the War Memorial stage.
Conductor Nicola Luisotti brings very specific and very powerful musicianship to opera. San Francisco Opera has yet to build a production around his unique talent. One hopes this may one day happen.
Luisotti conducts the first six performances (through June 29). The remaining four July performances, including the July 5 performance beamed directly onto the gigantic scoreboard of AT&T Park (home of the Giants), have a different cast of principals and a different conductor. Opera-at-the-Ball Park is not to be missed. It may be the Traviata you want to see.
Michael Milenski