A revitalized Rossini world has emerged over the past several decades, the difficult if astonishing tragedies find occasional productions, the famous comedies find ever tighter mise en scËnes, and singers have reached for an ever more refined Rossini technique and style. So when a conductor comes along who can enter the Rossini ethos, and this is not often, a sort of operatic nirvana can be achieved.
Director Alden’s Turco at the Long Beach Opera is remembered as one of these rare operatic moments. While the musical resources of a small opera company are limited, and American operatic resources twenty years ago were more enthusiastic than accomplished the Long Beach Turco succeeded not because of conducting but because of the staging. Alden’s heroine, trapped in her drab existence, found escape in the movies (like many of us in the 1950’s), and imagined herself swept of her feet by a handsome guy in a white suit with an accent. Finally, of course, real life prevailed and real love won the hearts of everyone.
This simple concept anchored three hours of singing, and made the very high artifice itself of the brilliant Rossini style the emotional crux of this fantasy of fulfillment.
Twenty years later Alden has now envisioned Rossini’s comic masterpiece as an intellectual game, much like Pirandello’s Six Characters in Search of an Author. Alden has made Rossini’s playwright Prosdocimo the protagonist of the opera, not just a benevolent facilitator of an intrigue about to happen (librettist Felice Romani had enriched a commonplace operatic comedy with the conceit of an author looking for a story). Alden’s Prosdocimo is an omnipresent troublemaker in perpetual conflict with his characters.
Prosdocimo possesses a Pirandello era (or so) typewriter on which he actually performs the Rossini score — clackity clack, clackity clack — in lively sync with the sounds coming from the pit. Well, until the heroine Fiorella grabs the typewriter to write her own script for a while. Alden makes his concept work flawlessly, with business between the author and his characters happening every second. Few if any moments are spared for us to savor the human dimensions of the story while we admire this interplay of wills. 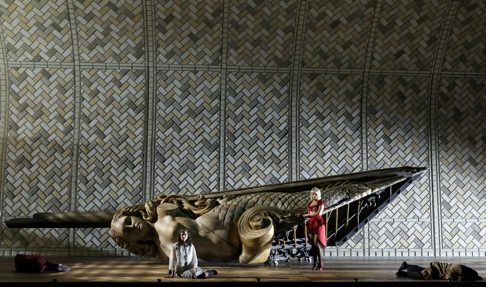 Cecelia Hall as Zaida, Olga Peretyatko as Fiorella. Set design by Andrew Lieberman
Alden and his set designer Andrew Lieberman know that less can be more, therefore they endeavored to keep the surroundings as simple as possible. The set is a floor that is stuck upon what would be the back wall of the stage climbing onto what would be the ceiling — a mind-boggling vaulted floor. It is the floor of an unidentified room, maybe the floor of the Korean evangelical church the pair used for their Berlin Aida a few years back. There was a church basement coffee urn in one corner of the Aix set, a reference certainly foreign to the French audience.
Alden furthered his early-twentieth-century-theater concept with an extravagant overlay of theatrical tricks discovered by Pirandello’s contemporary Bertolt Brecht. The staging was indeed an amusing primer in Brecht’s so-called Epic Theater, notably the half curtain, here movie palace green with a gold fringe. Set and costume changes were Brechtian a vista — we got to see a few of France’s intrepid intermittants actually at work (these are seasonal theatrical technicians about to loose their favored unemployment compensation who had gone on strike to prevent the premiere of Il turco from occurring as scheduled). All this Epic Theater served as smart business to intensify the mind games.
Lighting designer Adam Silverman provided an initial blast of stark white light emanating from a stage-wide hanging line of institutional lights, then at times he used only a part of the line to indicate a reduced acting area within the extreme width of the ArchevÍchÈ theater. As well much use was made of exaggerated side lighting (a side wall deftly slide back to admit this strong yellow gold light), not to mention changing the color of the huge back wall floor to rose or light green from time to time, and the surprising moment when a strip, stage wide, of lights embedded into the floor burst into in brilliant upward light. Like the staging and the design, the lighting too was virtuoso.
The prow pole of a classic sailing ship, replete with the sumptuous breasts of its carved female figurehead, was the Brechtian image for the Selim (the Turco). He was Romanian bass Adrian Sampetrean who was purely and simply machismo incarnate. Vocally he delivered raging coloratura cleanly and in full voice and displayed a confidence of character that was appropriately intimidating. Russian soprano Olga Peretytko, a regular at the Pesaro Rossini Festival, made a cheap and sassy Fiorella, well able to delightfully embody the caricature of a tacky Hollywood sex queen. Unfortunately by this penultimate performance (a run of seven) she was unable to find the vocal brilliance and stability that would equal her exquisitely defined character.
American soprano Cecelia Hall was Zaida, the Turco’s original love now in competition with Fiorella, She was costumed, like the Turco (whose only Turkish mark was a beaded fez), in homely, 30’s or 40’s drab everyday western clothes. The costume designer was Kaye Voyce, like Lieberman and Silverman, a frequent Alden collaborator. She managed a huge variety of vividly defined costumes — gypsy-like skirts for the six women extras who accompanied the drab Zaida (so we would know she is a gypsy even though she was not dressed like one), not to forget the transparent, filmy, fancy ball gowns the eighteen male choristers donned to create the masquerade party.
All this theatrical brilliance on the stage would have been more effective and more meaningful had there been a brilliant Rossini pit. As it was there were Les Musiciens du Louvre Grenoble, an original instrument orchestra (instruments of the time a piece was composed) founded 30 years ago by its now famous conductor Marc Minkowski. Perhaps, though doubtfully, a Rossini orchestra actually sounded like a wheezy reed organ, but this is not the sound needed to support a conceptually and theatrically complex contemporary opera production.
Conductor Minkowski never reached the Rossini boil that propels the listener into musical euphoria. The only true Rossini moment of the evening was achieved by tenor Lawrence Brownlee who gamely portrayed Don Narciso (an additional suitor of Fiorella) as an trench coat covered spastic. He lay in front of the half curtain and delivered “Tu seconda il mio disegno” in high style to earn the biggest, and the only real ovation of the evening.
Italian buffo Pietro Spagnoli ably fulfilled the task of bringing Alden’s high energy Prosdocimo to life for the duration of the long evening, and baritone Alessandro Corbelli found his match as the duped, defeated Don Geronio, the long-suffering husband of Fiorella.
Michael Milenski