The world of commercial public opera had only just dawned with the opening of the Teatro San Cassiano in Venice in 1637 and for the first time opera became open to all who could afford a ticket, rather than beholden to the patronage of generous princes. Monteverdi took full advantage of the new stage and at the age of 73 brought all his experience of more than 30 years of opera-writing since his ground-breaking L’Orfeo (what a pity we have lost all those works) to the creation of two of his greatest pieces, Ulysses and then his final masterpiece, Poppea.
As was the fashion, the “new” opera of the 1640s celebrated the precedence of the text over the music. It was said that music served to illustrate and therefore followed the text of the drama in every way, allowing the musicians to fill in the chords between the vocal and bass lines as they wished. More complete orchestration, it was thought, should be confined to musical interludes and aria-type passages. This theory has, it must be admitted, caused many of today’s early musicians many headaches!
At Iford, director Justin Way and conductor Christian Curnyn have sensibly foregone the usual “Prologue” as the original libretto by Badoaro established the fact that humans are just playthings at the mercy of the gods – Time, Fortune and Love .However, after this he also leaps into the story of our hero near the end of his trials and travels, and so we join the story as Penelope weeps and waits for her husband to return, pestered by ambitious suitors, whilst Ulysses is washed up on the shores of Ithaca unaware that the goddess Minerva has an idea…… 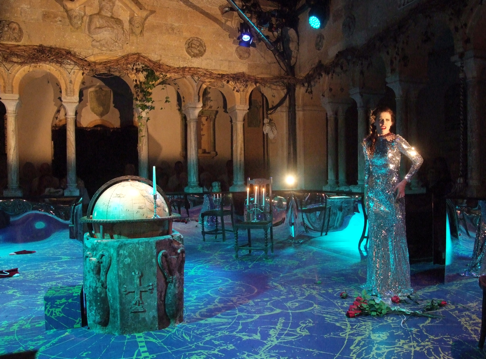 Elisabeth Cragg as Minerva
This Iford Opera production, sung in English, made the most of the tiny space with a vaguely “ancient/mythological” blue flooring design and subdued (and occasionally wayward) lighting. Costumes were also vaguely modern with more than a touch of the dressing-up box, but did little to disturb the intense drama of the piece. A production which served rather than inspired.
However, it was, rightly, the music and the drama which stayed with the audience as we departed into a ridiculously warm and starlit night in the depths of the Wiltshire countryside. Curnyn’s group of eight superb early instrument specialists – with himself at the harpsichord almost part of the drama from time to time – drew us into this time-warp of sound with grace, style and (even more difficult on a sultry evening) amazingly good tuning. 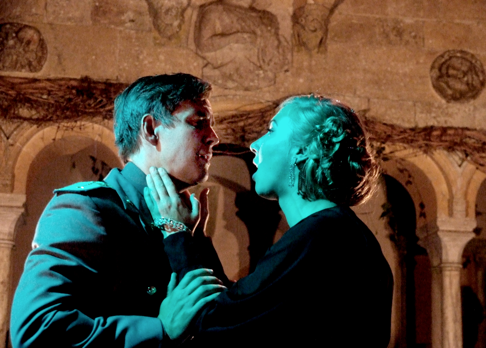 Jonathan McGovern as Ulysses and Rowan Hellier as Penelope
Of the 12 young singers there can only be praise, and they kept up Iford’s reputation for high quality vocalism. The restricted acting space requires complete immersion in the role as there is literally nowhere to hide when so close to the audience and as actors some were better than others. Here experience tended to tell: standouts had to be Rowan Hellier as a noble, plangent Penelope with rich mezzo tones throughout; Jonathan McGovern as the wandering hero Ulysses who brought a powerful tenor which also could spin a line with ease, and Daniel Auchincloss as the faithful servant/shepherd Eumaeus, who’s early music experience, high tenor and appealing stage presence made themselves felt. Among the more minor roles, the resonant snarling bass of Callum Thorpe as one of the nicely-delineated three suitors was memorable.
Monteverdi is not an “easy” option for any summer festival opera series and Iford Opera is to be congratulated for finding exactly the right mix of musicians and singers to convince and perhaps convert those for whom this was a first experience of how it all started so very long ago.
Sue Loder
Click here for cast and production information.