At a time when few companies risk devoting resources to lesser-known lyric theatre, this enterprising operation has gambled, and won, with a handsome new production of Samuel Barber’s Vanessa that was characterized by first-rate musical and theatrical values.
Conductor Barbara Day Turner wielded a commanding baton that made the (slightly reduced) orchestration pulse with character and vitality. The top-notch instrumentalists, assembled from near and far, played as one and the Maestra elicited many happy revelations from the rich orchestral writing. She unleashed every bit of passion from the rhapsodic moments, and discovered a beautiful balance with the more straightforward (and sometimes witty) conversational exchanges. Moreover, the conductor was a collegial partner with the singers who were coached to a fare-thee-well. Barbara Day Turner may have just achieved the most accomplished and inspired operatic conducting I have experienced in recent memory.
The musical success was made complete by a highly accomplished cast of singers. In the demanding title role (written for Callas but passed down to Steber), Beverly O’Regan Thiele exuded glamour and elegance, physically and vocally. Hers is an alluring sound and she possesses sound technical ability. She convincingly makes the transition from desperate longing to almost girlish fulfillment. She seems to have a found a rich subtext to Vanessa, and her multi-layered portrayal is fascinating, coupled as it is with well-judged vocal effects. If I had one wish, it would be that she commanded a bit more weight in the lower middle when up against a few moments of thick orchestral texture. But happily, she doesn’t force her beautiful tone beyond its limits and the overall achievement was thoroughly captivating. 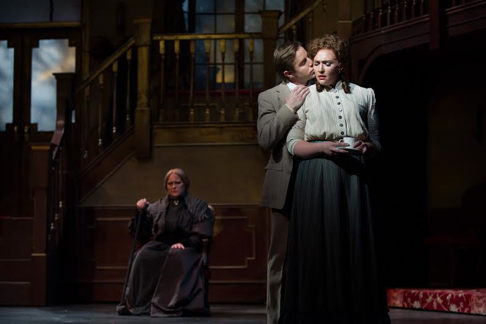 Amanda Tarver (Baroness), Andrew Bidlack (Anatol) and Alice-Anne M. Ligh (Erika)
As the opportunistic Anatol, Andrew Bidlack was almost too good to be true. His honeyed tenor was capable of unctuous sweetness, but also had ample reserves for the more spinto romantic urgings. The high soaring phrases held absolutely no terror for him. In addition to his persuasive vocalizing, Mr. Bidlack is handsome as all get-out, and he looks instantly believable as the cad that is young enough to be Vanessa’s former lover’s son. He communicated a calculated electricity with his conquests and one could accept that he might prompt an object of his attention to act against her own best interests.
Alice-Anne M. Light displayed a sumptuous mezzo as Erika, and she won us over early on with a delectably intoned Must the winter come so soon. With a beautifully even tone, a very wide range, and a sound technique already in her arsenal, Ms. Light might loosen up a mite and inject more dramatic color in key phrases. Erika is after all, the most complex occupant here in Dysfunction Junction. And, the most potentially sympathetic. She has all the right qualities and at the end of the day, there is always that splendid instrument. Still, I would hope that future outings will allow her to engage the audience with a deeper embodiment of the girl’s concealed pain. Richard Zuch brought Wotan-like power and Donizettian charm to the character of the Doctor. The only thing he occasionally forgot to bring was consonants. But with a bronze baritone this solid and generous, and a stage demeanor this appealing, Mr. Zuch easily won the audience over. His spinning in a drunken circle to plop on the settee while sustaining a high F-sharp was nothing short of amazing.
Kevin Nakatani made a fine impression as the servant Nicholas, and he wrung every laugh out of his moment of adoration of a guest’s fur coat. The Maids Madolynn Eileen Pressin and Elizabeth Tait had real personalities and executed specific stage business with skill. I especially liked the suggestion that one of them had also been a willing recipient of Anatol’s attention. Amanda Tarver is arguably way too young for the old Baroness, but her physicality was commendable, and it was a treat to hear the role sung with such a fresh, substantial and robust delivery. Ms. Tarver might have been assisted had her age make-up been a little more pronounced and her wig a little grayer. 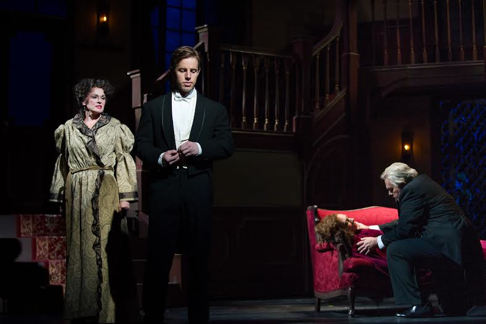 Beverly O’Regan Thiele (Vanessa), Andrew Bidlack (Anatol), Alice-Anne M. Light (Erika), Richard Zuch (Doctor)
That is not to impugn the overall achievement of the commendable hair and make-up design contributed by Susan Sittko Schaefer. The elaborate costumes created by Wes Jenkins were richly detailed, beautiful to behold, and helped in defining the characters. Jack Shouse designed an imposing mansion’s great room dominated by a massive staircase and balcony. Everything about the look and the accessories conveyed “Old World money.” Christopher Wood’s sensitive lighting was notable for its effective isolated areas, subtle shifting moods, and astonishing accuracy. All evening, the follow-spot contributions were very, very well-executed (did I say “very”?).
If I had to single out a highpoint in an evening plump full of them, it would have to be the final quintet. The placement of the soloists, the fluidity of the illumination, the excellence of the musical writing, the perfection of the singing, the gradual build-up of tension and volume, and then when you thought it couldn’t possibly get any better, the almost unbearably powerful climax with Mr. Zuch cresting the full ensemble’s fortissimo passage with a tremendous outpouring of gorgeous baritone sound.
Daniel Helfgot staged the piece with a sure hand. He used the space and the levels very well indeed, and created believable character relationships with well-motivated movement. I liked the focal point of the landing, midway up the staircase, although initially it did seem to relegate Vanessa to a disadvantageous upstage positioning at curtain rise. Mr. Helfgot knew how to point the dramatic tension, and also injected a good deal of humor into the proceedings. One minor reservation:
Having the front doors burst open to frame Anatol’s initial appearance, backlit and with snow falling was a stunning effect to set up Do not utter a word. But when he subsequently crossed into the shadowy room during the aria, could he have not closed the doors? I mean, it is the frozen tundra out there! It remained a distraction until well after the aria when Nicholas finally rolled his eyes and shut out the cold. This same thing happened when the duo returned from ice-skating. In an evening that was consistently marked by great attention to detail and realism, these two choices seemed out of character.
That minor observation aside, this accomplished Vanessa was a cause for substantial jubilation.
James Sohre