Georges Bizet composed his opera, Carmen, to verses by Ludovic HalÈvy and dialogue by Henri Meilhac. Based on Prosper MÈrimÈe’s novella of the same name, the work was first performed at the OpÈra-Comique on March 3, 1875. The Comique audience was accustomed to seeing performances that did not reflect any of the serious issues of the day and the low class characters seen in Carmen surprised many people. Local reviews were not positive, but the opera soon gained popularity from performances outside France. When it returned to Paris eight years later, it was already well on its way to becoming a major success.
Santa Fe opera has presented Carmen in various productions since 1961. This year’s version by Stephen Lawless takes place during the recent past in Northern Mexico near the United States border. The performance on August 6, 2014, featured Ana Maria Martinez as a monumentally sexy Gypsy who was part of a drug smuggling group. Because of the updating and change of setting, Jorge Jara’s costumes were smartly styled in bright colors except for the first act where Carmen and her colleagues wore factory smocks that they left open in front because of the summer heat.
Benoit Dugardyn’s Act II Tavern had a disco ball and microphones for Carmen’s nightclub act, the Chanson BohËme. His striking third act set put all but the most athletic smugglers behind the high fence that marked the border, so it was not until the last act that the audience got to again see the leading characters’ facial expressions. When we did see his face, Jose had become a dangerous, broken man who stalked his former lover.
Conductor Rory Macdonald began the performance with crisp, sprightly tempi that immediately set him apart as a force to be reckoned with. He caught the essence of Bizet’s work while allowing the singers enough room to interpret their individual parts as he drew fine playing from the orchestra. An enchanting seductress, Ana Maria Martinez was a Carmen to remember whose interpolated high notes added considerable interest to her vocal interpretation.
Tenor Roberto De Biasio was a passionate Don JosÈ who sang his role with ease except for the notably difficult final pianissimo of the Flower Song. As his original lover MicaÎla, Joyce El-Khoury’s smooth legato and silvery high notes told of her plight in dangerous times. Kostas Smoriginas was a charismatic bullfighter who took over Carmen’s nightclub audience with his virile, resonant bronzed tones.
Amanda Opuszynski’s Frasquita had bell-like high notes, but low notes of Sarah Larsen, the MercÈdËs, were hard to hear. The strong voices of Dan Kempson as Le DancaÔre, and Noah Baetge as Le Remendado completed the group of smugglers. Surprisingly, for the beginning of the quintet, Director Lawless placed Carmen upstage, away from the others and there were a few unsynchronized notes. 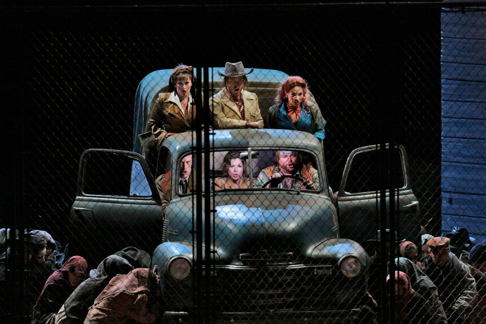