The San Carlo was the world’s most important theater at that time. Its legendary caffe waiter turned opera impresario Domenico Barbaja had not only the famous mezzo-soprano Isabella Colbran (his mistress, later Rossini’s wife) on his roster but also three splendid baritenori [literally baritone tenors] — the baritenore, the contraltino and the tenore di grazia represent the Italian high tenor voices of the time. Plus the San Carlo possessed a sizable stable of dancers, an accomplished orchestra with excellent solo players, and, not least, a stage endowed with the latest in technical innovations!
With Elisabetta (anticipating Sir Walter Scott) and Otello (Shakespeare) Rossini had ventured into dramatic territory new to opera. Two masterpieces resulted. But in Armida Rossini returns to the imaginary world of chivalry and its heros, specifically the knight Rinaldo and his captor, the beautiful witch Armida (the late-Renaissance poet Tasso’s intense version of Ariosto’s Alcina, both derived more or less from the Ariadne myth we know so well from the Richard Strauss opera).
Like Tasso Rossini plays the emotive strains of rapture and rage in gloriously rich language — Tasso in word and Rossini in music. The Teatro San Carlo’s librettist was one Giovanni Schmidt who gave Rossini lots and lots of syllables to transform into sublime vocal lines — the inimitable Rossini flights of vocal delirium. Schmidt’s libretto is indeed long on affect (and quite short on action and situation) giving Rossini ample opportunity, maybe too much opportunity to exploit his voices and to explore the affective potentials of the musical instruments in his pit — horns of course and also the extreme treble range of the cello as examples. 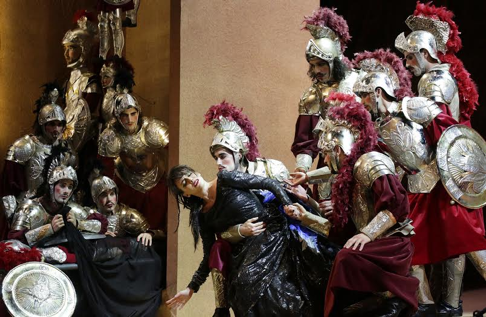 Even without the complex ensembles that burst forth so magnificently in many of the Neapolitan operas there is potentially just enough of the Rossini genius in Armida to thrust it into the masterpiece sphere. This did not occur just now in Pesaro.
The conductor was Carlo Rizzo, well known to big house audiences for the grand repertory. His Rossini credentials seem to be that he will conduct MosÈ in Egitto and Guillaume Tell at the Scottish Opera a couple of years from now. This maestro’s intention seemed to be to layer the moods and colors of late Romantic music onto Rossini rather than to energize and illuminate the Rossini vocabulary and gesture. The Rossini score did not support this stylistic transposition and left us indifferent to the orchestral playing and much of the singing.
In fact the sole ecstatic ovation of the evening occurred for the ballet (normally there are many extended periods of applause and foot stomping that Pesaro audiences use to release their excitement, though intelligence from opening night reports that that audience released its disappointment with considerable booing)! Just when you thought that opera ballets were unique to France you found a thirty or so minute ballet in Naples, and two years later there is an extended dance scene in MosÈ in Egitto as well. Throughout its years of patronage by the Bourbon dynasty the Teatro San Carlo fulfilled these rulers’ love of dance.
In the Act II finale Armida conjures an allegorical vision of a young warrior succumbing to the pleasures of the senses. Rossini composed an orchestral theme and variations that choreographer Michele Abbondanza exploited to the fullest with eight or so quite athletic and accomplished dancers from his Compania Abbondanza/Bertoni (his collaborator is the dancer/choreographer Antonella Bertoni) backed up by what seemed to be about ten, maybe twelve able and willing supernumeraries. Mr. Abbondanza’s movement vocabulary was advanced, at once inventive and highly controlled. It was complex, ornamental and inexhaustibly evolving. It was an absolutely over-the-top feat of theater. In short it was everything you want from a Rossini performance.
Choreographer Abbondanza is a teacher at the Scuola di Teatro Giorgio Strehler. The director of this school of such prestigious name is octogenarian Luca Ronconi who was not so coincidently the metteur en scËne of this Armida together with his septuagenarian collaborator Ugo Tessatori.
The Rossini Festival assigned Armida to the Adriatic Arena, a venue that has seen over-the-top mise en scËnes in recent years, its vast spaces transformed into massive scenic installations supporting brilliant concepts. Thus expectations were high. Long time Ronconi collaborator Margherita Palli created the scenery. It was a crumpled brown paper-like background against which floor to ceiling display cases slid on and off, plus there was a hidden conveyor belt that weirdly transported actors on and off the stage but oddly only three or four times over the long evening. It would have been more appropriate scenery in Pesaro’s traditional Teatro Rossini.
Signor Palli’s credits include installing shows at various museums over the years. Perhaps this experience led to the production concept which seemed to be that we should see this old opera as artifact rather than as living, breathing art. Costumer Giovanna Buzzi cooperated by dressing her soldiers in clumsy, oversized armored vests and blousey shirts that visually stultified all sense of movement. Armida, the only female singer, was in abstract bird-like, intensely colored gowns, solid red for her final scene of first supplication, then revenge. The demons were dressed as bats in costumes that reeked of naivetÈ to our modern eyes, further quoting antique style costuming and further creating the sense of artifact that Sigg. Ronconi and Tessatori apparently sought.
Armida was sung by young Spanish soprano Carmen Romeu, an ambitious assignment she completed honorably if without distinction. Armida is a role for a star — for the Spanish mezzo-soprano Isabella Colbran as example. It demands a magnetic performer and a great singer. At this point in her career Signorina Romeu is still an aspiring artist who boasts clean and careful, finely wrought coloratura. But the role as well requires considerable full voice singing in the lower soprano register where Sig.na Romeu sometimes lacked the support necessary to maintain accurate pitch. One does however appreciate the conceit of casting a Spanish soprano in this Colbran role. 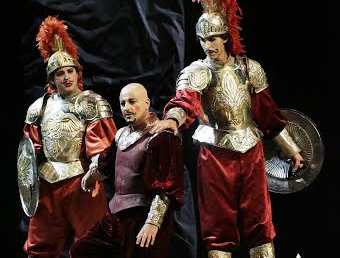 Dmitry Korchak as Carlo, Antonino Siragusa as Rinaldo, Randall Bills as Ubaldo
The high point of the evening was when Rossini’s compositional virtuosity exploded in the third act three tenor trio, “In quale aspetto imbelle” — Rinaldo sees himself reflected in a warrior’s shield as a disarmed lover. The knights Ubaldo and Carlo encourage him in his struggle to sacrifice love to glory. The lover Rinaldo was sung by Italian tenor Antonino Siragusa, a veteran of many roles in Pesaro, usually villains. It was a stretch of imagination to see him as the romantic hero. He is a very fine singer with all the secure, ringing high notes Rossini demands, and exquisite, beautifully voiced coloratura. He offered the finest vocal pleasures of the evening.
Russian tenor Dmitry Korchak cut a fine figure first as Gernando, a French knight who was outraged when Rinaldo was elected as leader of the French forces, and then as Carlo, a knight sent to rescue Rinaldo from Armida. Mr. Korchak possesses the baritonore voice, a darkly colored high voice. While he did manage his few high notes, barely, he created none of excitement with them that he achieved in his coloratura. American baritenore Randall Bills was asked to portray Goffredo, the commander-in-chief of the Christian forces. He is a slightly built, fine young artist with a lovely, warm tone. He was dramatically far more successful later in the opera when he had become the French knight Ubaldo and contributed significantly to the overwhelming beauty of the tenor trio.
Michael Milenski

Apollo of the Arts: Lost Lamentations – a concert for connoisseurs at Winchester College Chapel