Such was the case with the wholly persuasive Glimmerglass staging of Madame Butterfly devised by Francesca Zambello. The director has presented this same interpretation at other houses and in this case, familiarity has bred (near-) perfection.
Set designer Michael Yeargan has provided her with a cinematic playground of possibilities. Instead of a picture postcard house with a harbor view, cherry trees and japonaiserie, he has set crucial scenes in the waiting room of the American consulate. Goro shows Pinkerton a scale model of the house, rather than the usual on-site terrain walk. The women’s chorus for Butterfly’s entrance is comprised of American ex-pats gorgeously attired in white Edwardian dresses. Throughout, Anita Yavich‘s costumes were beautifully realized.
To be sure, Cio-Cio-San’s relatives and servants are there as well. And when the Bonze appears behind a scrim in front of an angry ancient sculpture, the consulate wall (upon which is printed the pledge of allegiance) flies out, the cast carries off the furniture and in a split second dissolve we are in a no man’s land of the psyche. As the curse recedes into a diminuendo, simple screen panels descend to suggest an abode. Pinkerton and Cio-Cio-San demurely remove clothing behind separate panels before uniting for a touching wedding night.
Act II finds the heroine back in the Consulate until such time as the cannon goes off in the harbor. Another dissolve reveals three ships in silhouette up left on the raked stage, like ghosts in the mist. In another vivid effect, the stage is completely bare for the Flower Duet and when the piece begins petals cascade down from the flies like a warm shower, blanketing the floor. Then, little Sorrow walks the whole perimeter of the stage strewing fistfuls of blossoms from a basket. Magic. The act ends with Butterfly facing far up stage center, framed by a searing golden light. (It is hard to over-praise the superb contribution of the chiaroscuro lighting by designer Robert Wierzel.)
With the waiting Butterfly immobile up center, Act III begins with a flashback of Pinkerton and Kate courting. Then, in another brilliant touch, a gangplank descends from the downstage right leg, with sailors and Lt. and Mrs. Pinkerton disembarking in Yokohama. A stage-filling configuration of rice paper panels form an overwhelming American flag that fills the stage. These give way to fewer and fewer white panels with finally only one front and center, behind which Cio-Cio-San prepares for her death.
In a final ‘coup de theatre,’ just as the doomed heroine does the deed, the panel flies out, and a deep red curtain falls from the heavens behinds her. Pinkerton shouts his “Butterfly’s” from behind it, then rips it down and rushes to cradle the corpse in a sea of blood red cloth. The goose bumps return even as I write this. I will never see this scene again without comparing it to this moment of unparalleled pathos. I have long been an admirer of Francesca’s fertile creative thinking, and this production found her at her considerable best. After decades of considering the clever Corsaro version at NYCO as the gold standard, this is my new benchmark for innovative illumination of this perennial favorite.
Still, whatever staging innovations may be put forth, the show ultimately rises or falls on the success of the leading soprano, and I can happily report that Yunah Lee was just tremendous. I am not sure what other current exponent of this demanding role is singing this part with such absolute security, freshness, and understanding. Ms. Lee’s well-schooled spinto is a bit (just a bit) on the metallic side, but she knows how to color and couch every phrase to maximum effect. She fully understands the role and gets comfortably under its skin. Every ‘Big Moment’ is thrillingly, memorably delivered. Moreover, Yunah is wholly believable as the 15-year old Geisha even in the proximity of the small Alice Busch theatre. For her overwhelmingly moving, impeccably sung performance, Yunah Lee deservedly earned the most vociferous ovation of the festival as the audience leapt to their feet as one to roar their approval at her curtain call.
Dinyar Vania’s Pinkerton was competent and perfectly acceptable, with his physical appearance suggesting Jerry Seinfeld as a Navy Officer. Mr. Vania effects a somewhat covered sound that delivers better in mid-range than at the top, where it can get just a bit effortful. He sounded best (which is to say very good indeed) at full voice and in ensembles. While Dinyar fully understood the motivations of the cad, he also brought some measure of conflict and remorse to it creating a fleshed out character.
As Sharpless, Aleksey Bogdanov commanded a handsome dark quality wedded to a solid baritone. He brought a slight officiousness and strong presence to the genial consul, not at all the oft-encountered conflicted milquetoast. Mr. Bogdanov’s rich singing and effective stage presence actually made the role memorable. Diminutive Kristen Choi was physically right for Suzuki, and her powerful, pointed mezzo brought astonishing power to her crucial moments.
Ian McEuen had many nice moments as Goro, and shows real promise. Sean Michael Plumb boasted a fine bass as Yamadori, Thomas Richards had the imposing vocal presence and threatening delivery that was needed as Bonze, and Erica Schoelkopf was an assured Kate Pierton. Louis McKinny (Sorrow) threatened to steal every scene whether saluting on cue, playing with his dad’s hat, adjusting his knickers, or even scratching his head. He was beautifully coached, deeply affecting and simply adorable.
Under Joseph Colaneri’s masterful baton, the orchestra played with such style and elasticity, such sensitive to the singers’ every phrase, that they seemed definitive partners in the drama. Even in a slightly reduced orchestration, Maestro Colaneri elicited a reading that was rich with detail and ripe with vibrant colors. 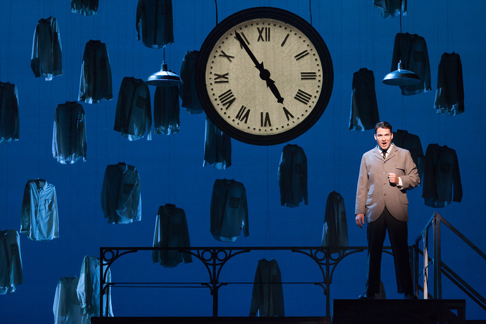 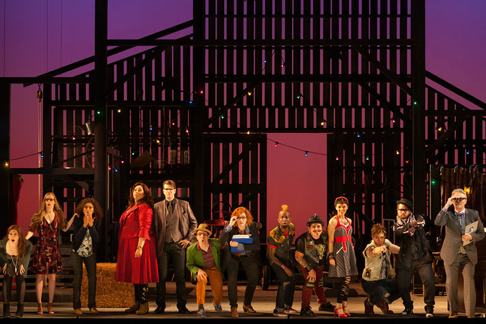 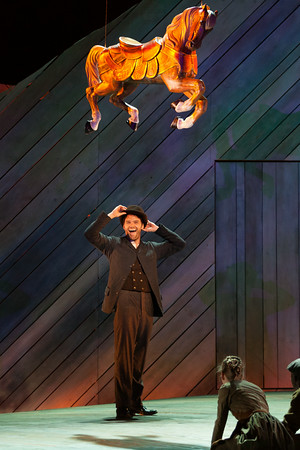