David Alden’s new production of Verdi’s Otello is a stirring
exercise in chiaroscuro. Boito may have omitted Shakespeare’s first
Venetian Act but the jarring opposition the inflammatory imagery which Iago
hurls at Brabantio — ‘an old black ram/ Is topping your white ewe’ — is
powerfully embodied in the bold juxtapositions and gargantuan shadows of Adam
Silverman’s superb lighting design, in the electrifying musical contrasts
conjured by conductor Edward Gardner, and in the incontrovertible opposition of
the murderous Otello’s black attire and Desdemona’s white night-gown.

There is little colour. Designer Jon Morrell has constructed a
claustrophobic, monochrome set: high stone walls tower over dusty grey
cobblestones, shutting out the exterior world, although the imposing portico
occasionally slides aside to give a glimpse of distant sunsets. Costumes are
similarly muted: Otello’s dull mustard war-coat is soon cast aside for
anonymous black worsted (indeed, there is little to distinguish this Otello
visually from those around him); Iago dons heavy, dark leather; Desdemona is
shrouded in flowing black folds. Only Cassio’s bright blue uniform and
Emilia’s rust-brown coat and cloche hat alleviate the subdued palette.
Tellingly, there is a flash of fire, and it is sparked by Iago’s dropped
cigar at the start of the raucous drinking song — by these means, he ignites
his Machiavellian plot. The small flaming brazier returns in the final scenes:
Iago’s evil has kindled the flames of jealousy to their tragic climax. 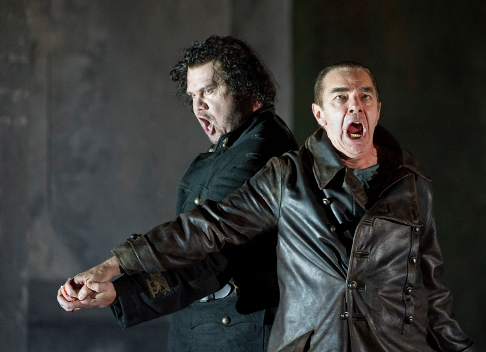 Stuart Skelton as Otello and Jonathan Summers as Iago

There is much to admire in this production, not least some fantastic singing
from chorus and soloists alike. In Act 1, the ENO Chorus roared with
exhilaration when their triumphant commander’s sail was espied and greeted
Otello’s arrival with a thrilling outburst of excited passion, as Turkish
flags were unceremoniously shredded. But, the decision to have the Cypriots’
hymn of praise to the beautiful, pure Desdemona sung off-stage was somewhat
odd, necessitating extra dancers to bestow gifts upon Desdemona, the strewn
ragwort suggesting a garden milieu.

Peter Van Hulle’s Roderigo was a portrait of preening solipsism, his
smooth tenor aptly mellifluous. Roderigo’s dandyish white suit and Panama hat
presented a sharp foil to the prevailing darkness, as he flopped foppishly in
the margins. As Cassio, Allan Clayton sang with sincerity, the warm sound open
and full, the phrasing elegant and lyrical. Cassio’s essential grace and
goodness — as Shakespeare’s Iago admits, ‘He hath a daily beauty in his
life/That makes me ugly’ — was powerfully communicated. Barnaby Rea had
real stage presence and imperious dignity as the Venetian senator, Lodovico,
while Charles Johnston was a resonant Montano.

Pamela Helen Stephen’s strait-laced costume made Emilia seem rather
reserved; and as there was little attempt by Alden to establish any sense of
the relationships that Emilia has with her brutish husband or with her noble
mistress, Stephen was left on the periphery dramatically. But, the
mezzo-soprano sang with characteristic clarity and vividness, particularly when
Emilia’s angry despair finally found passionate voice in the closing moments,
and Stephen made the most of every opportunity there was for dramatic nuance.

Leah Crocetto has a big voice and she sang with unforced power and much
lyric beauty as Desdemona, in what was her UK debut. Crocetto’s Desdemona had
grace and refinement; she demonstrated a fine feeling for a Verdian line,
although at times I found the wide vibrato overly mature — Desdemona has,
after all, barely left childhood. Initially calm and self-assured, Crocetto
suggested that she might serve as a path to redemption for Otello; indeed, this
inference was strengthened by Alden’s inclusion of a recurring visual motif
— an altarpiece Madonna which reminded us of Desdemona’s chasteness and
angelic purity, as well as recalling the Roman Catholic Italy where the opera
was composed. And, thus, in Act 3 when Iago dupes both Cassio and the concealed
Otello, the darts that he flung at the icon cemented his demonic status.

Crocetto modulated her tone effectively during the ‘Willow scene’ and in
her tragic tussle with the deluded, deranged Otello, as she strained to assert
her innocence, candour gave way to resignation. Why, therefore, was this tragic
dÈnouement not more affecting? One problem is the setting: Alden retains the
outdoor locale of the previous three Acts, and the murder takes place not in
the bedchamber but in the street. This weakens the trajectory of
Shakespeare’s play, which moves progressively, with a gradual tightening of
the dramatic focus, from large public spaces to ever more claustrophobic
private interiors, culminating in the domestic bedroom.

Moreover, in both play and opera, Desdemona has been banished by Otello to
this bedroom — that the tragedy occurs in a matrimonial chamber emphasises
the nature of Otello’s weakness: honoured, esteemed and mighty martial leader
he might be, but he is also ‘Rude … in my speech, And little bless’d with
the soft phrase of peace’ — it is his inexperience in matters of the heart
and home which allows Iago to deceive and manipulate his commander, for
dishonour in his marriage will blemish Otello’s reputation and thus destroy
the public persona that is his edifice against racial discrimination and abuse.
It is true that the conflict in Verdi’s Otello has almost no racial
dimension; but, this alteration does remove an important element in the
characterisation. And, there are still anomalies which result from Alden’s
alfresco setting, chiefly the absence of the bed upon which Desdemona bids
Emilia to lay her marriage sheets and nightgown, and upon which she dies.

In their despair, Desdemona and Otello clutched at facing walls, as Iago
perched on a be-shadowed chair, watching his handiwork unfold; thus Alden, by
sending the protagonists to the extreme reaches of the stage, emphasised their
emotional separation but this also distanced us from their suffering.

Indeed, Alden conveyed little sense of the all-consuming love which must
have existed for Otello and Desdemona to dare to defy paternal, social and
cultural mores. In the title role, Stuart Skelton sang with marvellous lyricism
and expressive range, finding soft tenderness in his end-of-Act 1 duet with
Desdemona (‘Gi‡ nella notte densa s’estingue ogni clamor’) and heroic
anger in his Act 3 vengeance duet with Iago (‘SÏ, pel ciel marmoreo
giuro’), in which the garish smearing of the men’s faces with blood made
for a striking and ironic image of brotherly loyalty and love. But, Skelton’s
Otello was overwhelmingly a man alone, and the tragic tangle of relationships
was only sketchily drawn. Despite the booming vocal sonority of his first
entrance, and his impressive physicality, even at the start Skelton did not
capture the majesty and stately grandeur of the man entrusted to lead the
Venetians to victory over the Turks. (Perhaps English, ‘We have
triumphed!’, doesn’t quite have the magnificent ring of Italian,
‘Exultate!’?) Instead, Otello seemed distracted and withdrawn, and the
signs of impending disintegration were evidence from the first. Psychologically
and socially, this Otello was above all else an outsider and there was
throughout a Grimes-ian angst and instability in the flashes of violence (the
chairs strewn around the stage were a reminder of Otello unpredictability) and,
as he tossed his papers of state furiously into the air, his indifference to
social authority and judgements. (The reference to the Pleiades in Tom
Phillips’ translation only seemed to underscore the parallels.)

It seems that focusing on Otello’s existentialism was a deliberate
directorial decision; in a programme interview, Alden explained, ‘I think the
portrait of Otello in the opera is a very interior one. It’s not so much
about the social context but rather about the life of this man’. But surely,
as for Grimes, it is the simultaneous desire to belong and defy that is
Otello’s undoing? Removing him from his context weakened our understanding of
Otello’s feelings and our empathy for his anguish.

One who did convey the full range of his character’s emotional flaws and
twisted motivations was Jonathan Summers as Iago. Summers found a different
vocal timbre for each of Iago’s ‘masks’: gruff soldier, loyal ensign,
suave trickster and violent, malicious malefactor. There may have been only
brief snatches of Verdian poetry, but this was fitting for a man who has no
poetry in his soul. Having closing the shutters to block out the light, Summers
also delivered an angry, bitter Credo that convinced of the blackness of his
heart. But, no sooner had his master reappeared, than this ensign was amiably
and smoking a cigar, a relaxed faÁade veiling his inner depravity and
crookedness.

Gardner summoned wonderful playing from the ENO orchestra, sweeping forward
in a whirl of Verdian melodrama. Despite the excellence of many of the parts,
this Otello did not quite add up to a complete and compelling whole,
but it’s still an impressive and thought-provoking show.