And everyone knew what had happened to the Capetian kings in France.
It was in these final moments of the Risorgimento (unification of Italy) that Verdi wanted to premiere an opera in which there is a successful conspiracy to murder a king! Censors in Rome finally agreed that a story about a governor of Massachusetts involved in a nasty bit of adultery could be accepted.
Censorship these days operates a bit differently. No longer political censorship it is now economic censorship. Opera management perceives that the public will not buy tickets unless art is packaged in insipid wrappers. No Calixto Bieito in San Francisco. In this famous Spanish director’s opening scene of Un ballo in maschera the courtiers sit on toilets in a mens room, the angry confrontation of husband and wife occurs in the bathroom of their home, their child’s toys floating in the bathtub.
On the War Memorial stage we were back in Sweden, at least we thought so because it was snowing in the second act, otherwise it could have been almost anywhere in nineteenth century Europe. In the program booklet there was no name credited to the design of the scenery. Presumably the sets are based on the production John Conklin created forty years ago (the mid 1970’s) and maybe the scenery has been modified for this staging by director Jose Maria Condemi, maybe by others over the years as well to the degree that it is not appropriate to identify Mr. Conklin with the sets.
Mr. Condemi is a resourceful stage director, finding business for his actors as if he were staging a comedy, and finding solutions for animating long chorus scenes with the addition of dancers miming slapstick comedy (or maybe this was a touch he was re-creating from the original production). He does move his actors around the stage with appropriate counter moves, and in fact he carefully sculpted all the musical numbers to accommodate Verdi’s musical initiatives. 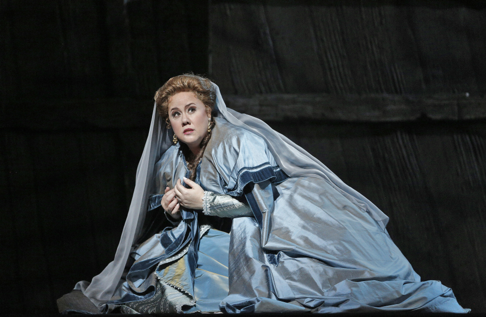 Julianna Di Giacomo as Amelia
However the opera itself lacks integrity, its libretto derived from those of several other remakes of an original libretto by EugËne Scribe who was famous for being able to recast nearly any story into reasonable opportunities for arias, duets and trios and then wrapping it all up in a big finale. The challenge in staging ballo is to create an atmosphere in which these musical forms transform theatrical formula into vibrant theatrical reality.
Context for this ballo was sorely missing.
Conductor Nicola Luisotti was in the pit. This meant that it was big conducting that resulted in a huge orchestral presence for this little story of innocent adultery that is in fact the big music of the politically strident Verdi.
The pit cried out for big singing and the three protagonists could in fact do big, each in a different way. The king of Sweden was Mexican tenor RamÛn Vargas, once a bel canto Nemorino, then a lyric tenor Werther and now Gustavo, a mature Verdi tenor! Mr. Vargas is big on musicianship, big on style, his medium sized voice pushed a bit beyond its endurance in this role with this maestro. The tenor and the maestro did together effect some quite fine Verdi moments.
American soprano Julianna Di Giacomo, a former Merola participant, was Amelia. She achieved volumes of beautiful tone that prevailed above the fortes of the full ensemble! Mlle. Di Giacomo presented herself as an arrived artist though she is not a fully finished artist, unable to create the emotionally charged vocal lines and tones that confuse innocence and guilt, the hallmarks of this and most Verdi heroines. It was therefore an incomplete performance.


Brian Mulligan as Renato
American baritone Brian Mulligan sang Count Anckarstrˆm aka Renato, husband of Amelia and Gustavus’s confidant and assassin. While Mr. Mulligan may not have the physical persona to impersonate a powerful Verdi baritone he apparently does have the voice, delivering the Act III “Eri tu che macchiavi quell’anima” in beautiful and passionate voice, one of the few felt moments in this mostly emotionally flat evening.
American soprano Heidi Stober was the Oscar. Mme. Stober is a mature artist whose facile, perfunctory performance did not capture the naivetÈ necessary to this role, an attribute that can make Oscar an emotionally moving part of the final moments of the opera. Veteran mezzo-soprano Dolora Zajick had the cameo role of Ulrica. A big artist, la Zajick cast an appropriate spell as Verdi’s witch but only very occasionally endowed her spell with magical singing.
Michael Milenski