Mr. Caird is a very skilled director of theater and music theater. He is well credentialed in opera in Britain with productions at Welsh National Opera, his U.S. opera credits are productions at Houston Opera that have or will tour to other U.S. opera houses. Let us not overlook the Siefried and Roy show in Las Vegas (1991-2004).
Mr. Caird has created a slick, intelligent and successful production of La bohËme. Typical of theater directors staging opera he has endeavored to keep the dramatic pace of the opera moving along, accelerating pace whenever possible. Scene changes are quick, intermissions are short, bows are choreographed. This with the apparent assumption that theater audiences need to keep their minds involved and music theater audiences need to keep the beat.
The opera audience has been conditioned over the past 300 years to stop time, to forget the story and sink into the elaboration of an emotion. So maybe for some of us in the War Memorial this Boheme seemed rushed and over-produced, even seemed condescending with lighting effects that were too obvious (as if we were incapable of feeling the music without its help).
Not even Rodolfo’s final cries were left as pure emotion — as the curtain fell on the dead Mimi he we see him transform the moment into words. We needed not feel the tragedy of this moment because it had become mere art — a tricky conceit. Maybe this Boheme was not for us, but for a music theater audience. 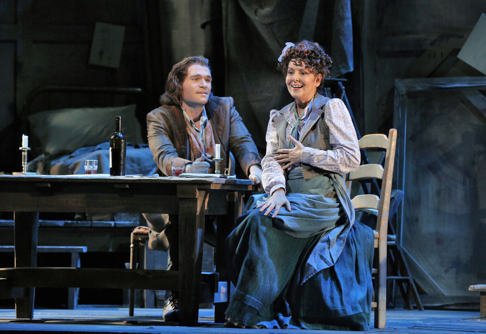 Michael Fabiano as Rodolfo, Alexia Voulgaridou as Mimi
Mr. Caird’s astutely perceived La bohËme as four character sketches — the garret, the cafe, the square, and the death. In fact Marcello, an artist as well, is busily sketching the dead Mimi when the curtain falls. Each setting is created by a collage of canvas paintings (images of rooms and buildings). The colors and costumes were in the warm palate of late nineteenth century naturalistic painting. Scene changes were a vista, stagehands visible in a slick bow to Brechtian dogma (with no hint of advocacy). It was meant to please a broad audience and it did.
Finally though none of this mattered. The November 19 performance was memorable because of riveting performances by American tenor Michael Fabiano as Rodolfo and Russian baritone Alexey Markov as Marcello. Tenor Fabiano boasts the clean musicianship of his American training, and an innate sense of Italian line unaffected by mannerism. He made Puccini into heroic bel canto that fully satisfies verismo. Mr. Fabiano is a natural actor, his moves at once incorporating the physicality of singing with the emotive enthusiasms of a young poet. 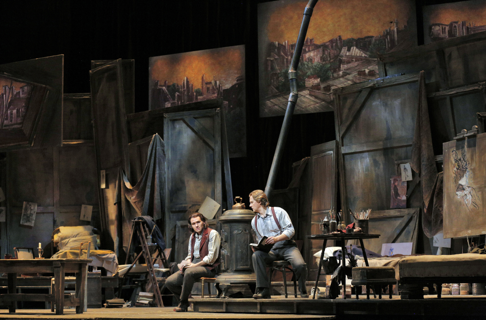 Michael Fabiano as Rodolfo, Alexey Markov as Marcello
Though of Russian formation much the same can be said of baritone Markov whose Slavic colored voice added an international exoticism to this young painter as well as specific flavor to the Parisian ambiance. Both Fabiano and Markov have strong, focused, beautiful voices that sailed across the orchestra. These artists in fact provided the musical determination for the performance far more than did the leadership, or lack of, from the pit.
The November 19 Mimi was Greek soprano Alexia Voulgaridou. The internet offers no birthday for Ms. Voulgaridou and it would not matter except that her voice betrayed the mannerisms of a singer no longer in the bloom of youth, or in bloom at all, and you wondered why she was cast as Mimi. Was it the spate of Toscas she undertook in 2013 (even though Tosca and Mimi are completely different voices)? But these Toscas seem to have worn her out and have encouraged her to fall back on generic (stock) opera singer moves and gestures.
The November 19 Musetta was former Adler Fellow Nadine Sierra. She was a far more youthful Musetta than you would expect to see on a major stage, and of much lighter voice (she is a lyric coloratura). This fine young artist made Musetta memorable, her coquettishness absolutely convincing while she carved out director Caird’s imaginative new antics to “Quando men vo soletta per la via.” These antics however forced an unnaturally slow tempo that would challenge even a much larger voice.
On November 20 the Mimi was former Adler Fellow Leah Crocetto. She sings beautifully, but physically she is not appropriate to embody a consumptive heroine. You wondered why she was cast. Italian tenor Giorgio Berrugi sang Rodolfo. This young tenor with a good sound has unfortunately absorbed many mannerisms that associate him with proverbial Italian provincial opera. Soprano Ellie Dehn sang Musetta. She is a San Francisco Mozart heroine (Countess, Donna Anna, Fiordiligi) who could not possibly make the transition from stately womanhood to this coquettish character role. San Francisco Opera regular, baritone Brian Mulligan was Marcello, a fish-out-of-water as well.
Colline, Schaunard, and Benoit/Alcindoro were the same singers for both casts. Christian van Horn is San Francisco Opera’s catch all bass, one night Alidoro in Cenerentola, the next two nights Colline, then back to Alidoro. While a competent performer he does not approach the depths of character that these smaller but crucially important roles require.
The conductor was San Francisco Opera’s resident conductor Giuseppe Finzi. With the help of messieurs Fabiano and Markov he carried off November 19 honorably. On November 20 he could not bring the cast to musical cohesion. At both performances I longed for a conductor who felt verismo, not simply a maestro to accompany, or try to, the singers. Follow this link for an account of a performance by such a maestro: La bohËme at San Francisco Opera.
Michael Milenski