The title character Manrico is sung by Yonghoon Lee, his beloved Leonora by Amber Wagner. Mezzo-soprano Stephanie Blythe takes the role of the gypsy Azucena, mother of the troubadour Manrico, while baritone Quinn Kelsey sings the Conte di Luna. Ferrando, in the service of the Count, is performed by bass Andrea Silvestrelli. The Lyric Opera Orchestra is conducted by Ascher Fisch and the Chorus is prepared by Michael Black. In charge of both directing the revival and the choreography is Leah Hausmann.
It is the words of Ferrando with which the action commences, as he cries out
“All’erta, all’erta!” [“Look sharp!”] to his assembled men while encouraging them to remain attentive at the night-watch. The current Conte remains near the house of his beloved Leonora at times throughout the night. Mr. Silvestrelli’s rising pitch on “Trovador” underscores a serious rivalry between the troubadour and the Count, since both men hope to secure the affections of Leonora. In his performance of “Abbitta zingara” [“a despicable gypsy crone”] Silvestrelli narrates the background of the elder Conte di Luna’s misfortunes with a captivating sense of musical line. The rapid, tripping notes of this aria were produced with clarity and decorative touches, so that the entire vocal line was vividly audible. In the second part of his aria Silvestrelli warns the collected men-at-arms with a lighter tone and even greater flexibility in the runs and trills. Establishing dramatic parallels at “al inferno” [“to hell”], the men of the Lyric Opera Chorus join in the wish to see the old gypsy’s daughter Azucena condemned to burn just as her mother. 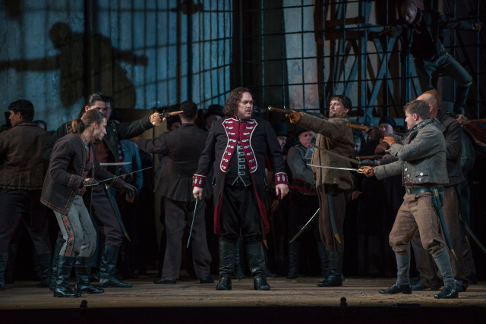 Quinn Kelsey
After this exciting opening scene Leonora’s entrance communicates an emotional state with softer yet equally moving vocal gestures. Ms. Wagner as Leonora emerges to look into the nocturnal garden, during a scene where she is accompanied by her attendant Inez, sung in this production by mezzo-soprano J’nai Bridges. Wagner’s conception of “Tacea la notte” [“The serene night was silent”] shows a mature approach to the scene and following cabaletta, in which vocal decoration enhances the urgency of her character’s emotions. When she describes to Inez the first meeting with her unidentified admirer, Wagner declaims “al vincitor” [“onto the victor”] with a pure, rising pitch to recall the recipient of the crown after a recent tournament. At the same time, in her aria Wagner’s binding of individual verses creates a smooth yet growing intensity. Exciting top notes are combined with an effective slide toward the close of the piece. Ms. Bridges acts as an ideal foil to her mistress with deeply moving low notes in her appeal to reject the continued appearances of the mysterious troubadour. Wagner’s performance of the cabaletta “Di tale amor” [“With such love”], in which she rebuffs Inez’s appeal, shows a solid command of range with middle and low pitches being used impressively.
In the following three scenes of the first act the two male principals establish their vocal and dramatic presence. Mr. Kelsey’s Conte, at first alone in the garden, trembles with positive anticipation in the hope of glimpsing Leonora. The Conte’s manner is transformed into rage when he recognizes the voice of the troubadour Manrico. Kelsey’s shift in vocal color and intonation illuminates the text as well as his character’s volatile personality. His tender words “l’amorosa fiamma” [“flame of love”] disappear believably into the rage of “Io tremo” [“I seethe”] and “O gelosia!” [“Ah, jealousy!”], when Manrico’s song is heard. Kelsey’s physical involvement underlines his masterful projection of contradictory emotions when he encounters Leonora in the moonlit scene. Mr. Lee settled into Manrico’s serenade from offstage after several pinched forte notes. His entrance is greeted, of course, with relief by Leonora and even greater rage by the Conte. During the ensuing trio, before an expected sword fight concludes the act, all three principals sing with exciting commitment. Kelsey stands out especially for his vocal embellishments as a further expression of fury. Concerning the production, some of the dramatic blocking at this point could be adjusted in order to render the stage action even more credible. 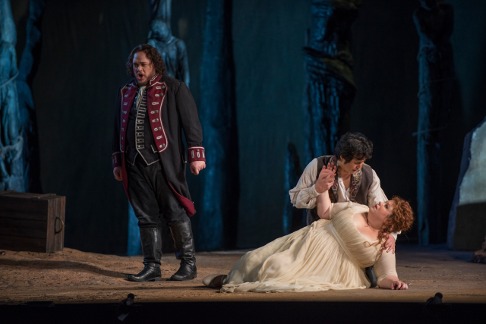 Quin Kelsey, Yonghoon Lee and Amber Wagner
In the second act as here depicted the Anvil Chorus is a gritty, muscular assembly of workers. In Azucena’s extended aria and soliloquy “Stride la vampa!” [“The flame crackles!”] Ms. Blythe relates the burning of her mother at times with dramatic high pitches, at others with piano tenderness. Blythe inhabits the role of Azucena completely as she narrates her own determination to avenge the execution of her mother. Cries, laughter, and lyrical melodies as well as outbursts are combined into a seamless evocation of the gypsy’s persona. When she sings here together with Lee’s Manrico, Blythe maintains her line of character while also issuing warnings and urgent appeals for her son’s safety. In the concluding scene of Act Two Manrico has left the gypsy camp, despite Azucena’s council, in order to engage in battle and to prevent Leonora from entering a convent. The Conte arrives simultaneously at the convent with the intention of abducting his beloved. As he waits in the company of Ferrando outside the convent the Conte sings “Il balen del suo sorriso” [“The flashing of her smile”], reflecting on his continued infatuation with Leonora. The showpiece aria for baritone is precisely that in Kelsey’s performance: diction is superbly maintained so that individual elements are clearly audible while also yielding to interpretive emphasis. The “stella” [“star”], with which his beloved compares, is intoned with a poignant top note, lines incorporating decoration or trills are sung with lightness to balance the emotional involvement. Toward the close, Kelsey’s rendition of “tempesta” truly reflects the storm that rages in the heart of the Conte. Manrico’s appearance to save Leonora from abduction is swift and here deftly staged. As the heroine is whisked off by the troubadour, Wagner’s final note expresses the shock and elation at being saved, at least for the interim.
The brief third act shows Lee’s Manrico, in his first aria, to his best. In his song to Leonora, “Ah sÏ, ben mio” [“Ah yes, my love”] Lee controls volume and stays evenly on pitch while incorporating the embellishments and piano lines that make this aria into a true song of love. Once he hears that Azucena is imprisoned and awaits execution, Lee standing amidst the supporting chorus sings the famous “Di quella pira” [“Of that pyre”]. Here Lee’s high notes were fully in place, yet his middle and lower registers were ineffectively veiled.
In Act Four Leonora is called upon to express her character’s resolve in a series of arias and ensembles. In the first of these, “D’amor sull’ali rosee” [“On the rose-colored wings of love”], Leonora sings of her attempts to console and to free Manrico who has been imprisoned by the Conte. Wagner’s approach to this aria is very well executed, her descents to low pitches emerging as naturally as the requisite trills and top notes. The subsequent duet during which Leonora offers herself to the Conte while attempting to free Manrico [“Mira di acerbe lagrime” [“O look, of bitter tears”] is performed by Wagner and Kelsey with a number of bel canto touches in a further exchange of contradictory emotions.
The final duet between Azucena and Manrico shows Lee comforting Blythe’s gypsy in a touching scene before the violent conclusion of the opera. Lee sings here with assured legato to dispel his mother’s fears of the pyre. As a pendant to this scene between mother and son, the final dramatic outburst revealing the fraternal relationship of Manrico and the Conte becomes all the more shocking.
Salvatore Calomino