Known to European opera-goers for her work in Frankfurt (and also the less
than triumphant Lulu in Salzburg four years ago) Madame Nemirova’s
conception of Otello for Bucharest was a single idÈe fixe.
As Sherlock Holmes might have put it: ‘The Case of the Incriminating
Handkerchief’. The fazzoletto in question took on such overwhelming
significance at one point during the superb concertante ensemble E un dÏ
sul mio sorriso in Act III, the sky was literally snowing with ragged
pieces of white cloth which were certainly a far cry from the fine cambric
(un tessuto trapunto a fior e pi˘ sottil d’un velo) specified in
the text. The ubiquitous hanky first made a surprise appearance falling from
the sky during Otello’s Gi‡ nella notte densa scena making no sense
of his statement to Iago in Act II that he gave it to Desdemona when they first
met (il fazzoletto ch’io le diedi, pegno primo d’amor).

The single stage set design by Viorica Petrovici was a steeply raked
stone-stepped ersatz piazza with two ugly metal balconies/fire escapes, metal
railings and a Giacometti-esque tree at the back. It would appear that the
Venetian Republic’saccounting departmentweren’t wasting
any money on lavish quarters for their gubernatorial representatives. Not only
was Desdemona deprived of her prie-dieu, she didn’t get a bedroom
— or even a bed. The Salce salce aria in Act IV was sung ‡
la Manon Lescaut outside among the detritus of fallen fazzoletti
left over from the previous act. The staging was also a long way from
15th century Cyprus. It was possibly intended to be contemporary
Lampedusa or even somewhere in Sicily as there seemed to be an abundance of
persecuted Albanian refugee types mixed with the odd Mafiosi and
carabinieri. 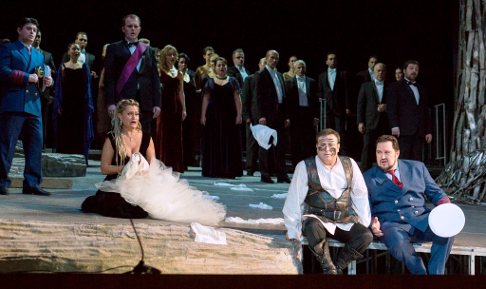 Otello was rescued from the storm in a rubber dinghy but the leone di
San Marco’s entrance and triumphant Esultate! was made nowhere
near the stage or dinghy but from the stage-right parterre loge with Desdemona
at his side — presumably an unscripted stowaway. The rubber dinghy turns into
‘The Love Boat’ as the locus of Otello and Desdemona’s conjugal bliss at
the end of Act I. It seems the Venetians, at least in warmer Cyprus, were keen
on al fresco fornication. The drunken brawl between Cassio and Montano
in Act I was not fought with the customary swords but with street-gang style
broken bottles. Unfortunately the bottles were plastic which made Montano’s
serious wounding unlikely and Otello’s imperious command to Abbasso le
spade! rather hyperbolic. Caporegimento Iago’s dramatic Act II
scena and aria Credo in un Dio crudel was sung sitting on the
edge of the stage with his legs hanging over the orchestra pit and the
house-lights turned on, presumably to indicate the veracity of his
Machiavelli/mafioso mentality or perhaps to keep the audience from dozing off.
This was hardly likely given the violent blasts from the brass section of the
orchestra. Instead of receiving tributes of flowers from the Cypriot children
in Act II ( T’offriamo il giglio, soave stel) Desdemona gives the
kiddies small sheets of paper to make paper planes. The projectiles then waft
through the air portending the appearance of the flying fazzoletti in
the next Act. In keeping with the conceit of a Sicilian setting and cosa
nostra traditions, at the end of the great Act II duet SÏ, pel ciel
marmoreo guiro, Otello and Iago cut themselves across the chest and then
embrace to seal the deal with a blood pact of homicidal corpuscles. Perhaps
confusing Otello with Pagliacci, Madame Nemirova has Otello
paint black war-paint splodges and stripes on his very white face during his
Act III aria Dio! mi potevi, despite the fact that Otello’s natural
blackness is frequently referred to in the libretto (ho sul viso
quest’atro tenebror). The end result is a rather pasty, chubby-grubby,
non-descript, ineffectual individual with a kink for Goth. The important
official ducal document ordering Otello’s return to Venice (una pergamena
avvoltata) was a miserable scrap of paper Lodovico’s cleaning lady might
have used for a laundry list. Obviously there was also no ducal seal for Otello
to kiss (Io bacio il segno della Sovrana Maest‡). The final soi
disant coup de thÈ‚tre was during Otello’s dying moments
whenIago appears in the stage-right box and turns to the audience as
if rendering judgment on his successful machinations. Mephistopheles meets
Simon Cowell.

Mercifully the musical side of the performance was vastly less irritating.
The coro trained by 86 year old chorus master Stelian Olariu was
consistently impressive, paid scrupulous attention to the dynamic markings of
the score and sang with impeccable diction. Fortunately they also somehow
managed to get through Act III without the blizzard of falling handkerchiefs
clogging their throats. There were a few synchronization
problems with the orchestra in the Act II cross rhythm ensemble with
children’s choir (T’offriamo il giglio, soave stel) and later in
the animando sempre poco a poco conclusion to Act III beginning with
Desdemona’s ed or, l’angoscia in viso. One suspects this was more
to do with poor ensemble control from the podium than choral lassitude.

Adrian Morar conducted with unspectacular dependability, although his
reading tended to lack breadth and the orchestral balance was often
unsatisfactory, particularly in most of the woodwind section, which seemed
incapable of playing anything less than mezzo-forte. There was no
organ for the ominous pedal which underpins the opening Una vela! Una
vela! chorus and other instrumentation was either omitted or reduced. With
a total of only 22 first and second violins, the soaring string sound which is
necessary to balance the formidable orchestration for brass and percussion was
generally absent. While for most of the score the flutes had the requisite
dolce timbre, bassoons were almost always too loud and the cor anglais solo
passages in Salce salce were jarringly intrusive (the scores indicates
nothing louder than piano and more often pianissimo). There
were intonation and rhythmic inconsistencies with the double basses in the long
F Minor solo poco piu mosso passage preceding Otello’s entrance in
Act IV although there was some particularly lyrical and sensitive cello playing
during the introduction to the Gi‡ nella notte densa duet in Act I.
Horns were raspy (not such a bad thing) but often made slightly imprecise and
wobbly entries.

Of the principle singers Cassio, Desdemona and especially Iago, were more
than satisfactory. The Cassio of Liviu Indric?u had credible stage presence, a
clearly focused voice in all ranges and an excellent bright ringing top. His
singing of Miracolo vago dell’aspo e dell’ago in the Act II duet
with Iago displayed sound legato and an attractive cantilena. Iulia Isaev as
Desdemona was clearly the crowd favourite and received a standing ovation at
the final curtain calls. Looking rather like Karita Mattila with blond hair and
voluptuous bosom, she sang with commendable fidelity to the score and
sensitivity to the exceptionally poetic libretto. Her long set piece ‘Salce
salce’ in Act IV was well paced, displayed a warm legato and an ability to
shape the long Verdian vocal line. The Ab at the end of the final
arpeggio was a tad rushed but showed a Tebaldi-like vibrato- free top which was
particularly agreeable. If there was any criticism it was a slight lack of
power in the big ensembles, but there are not many Mirella Freni’s out there
who can ratchet up the fortissimi to soar over massed chorus, soloists
and orchestra. The Iago of Valentin Vasiliu showed complete commitment to the
role, both vocally and dramatically. With a combination of the snarling
marcato of Leo Nucci and the insinuating lyricism of Piero
Cappuccilli, Mr Vasiliu is a first-rate baritone with strong projection and
measured mezzopiano. His Italian diction was also excellent. Of the
smaller roles, the Emilia of Sorana Negrea was dramatically convincing but a
little under-voiced, especially in the important confrontation with Otello at
the end of Act IV. The Lodovico of Marius Bolo? was vocally weak and
dramatically implausible as the Emissary of the Doge and Senate of Venice. His
appearance in an ill-fitting tuxedo merely enforced a total lack of gravitas.
It was hard to find anything to admire about the Otello of guest artist Daniel
Magdal. Yes, he could certainly belt out top Gs, As and Bb’s but that was
all. There was no legato technique and his phrasing, if it existed at all, was
invariably clipped short. Chest and low register notes were lacking in vocus,
parlando passages were perfunctory and any attempt at piano
disappeared down his doublet. Unfortunately Mr Magdal’s physical appearance
matched his vocal shortcomings. Instead of the utterly dominating physical
stage presence one experienced with James McCracken, Jon Vickers or Pl·cido
Domingo as the intimidating intemperate warrior, all we had was a pale,
paunchy, pouting, petit-bourgeois with a leather fetish. Considering the
quality of the other protagonists, this irksome production deserved a much
better title-role tenor.