For some strange reason Tchaikovsky’s Yevgeny Onegin has recently
been subject to the same directional quirks and aberrations that used to be
reserved almost exclusively for the works of Wagner. Carrying on the bad old
traditions of German directors such as Harry Kupfer and Hans Neunenfels, most
of the recent culprits seem to have sprung from Poland. There was Micha?
Znaniecki’s aquatic staging in Bilbao and Zagreb; Krzysztow Warlikowski’s
‘Brokeback Mountain’ Yev-gay-ny in Munich (which
certainly outraged the good Catholic burghers of Bayern) and pre-dating them
all, Mariusz Treli?ski’s visually exciting but seriously flawed
interpretation for the Polish National Opera in Warsaw in co-production with
the Palacio de las Artes Reina SofÌa in Valencia.

Mr Treli?ski’s most obvious and definitely annoying directional
digression was the introduction of a non-speaking, omnipresent, white-clad,
walking-stick-wielding spectral character listed in the programme as ‘O***’
(definitely not ‘O’ for Onassis). This repellent, diabolical, bald-headed
ogre seemed at times to be a benign version of an old Onegin as a passive
observer of past events (similar to Kasper Holten’s recent concept for Covent
Garden) and at others, a truly Mephistophelian figure stage-managing every
detail of the drama with absolute and brutal malevolence. Mariusz Treli?ski is
a celebrated Polish film director and now Artistic Director of the Polish
National Opera. Somehow he seems to see no problem in the ambiguity of the
soi disant ‘superfluous man’ character as both passive observer
and aggressive avatar puppeteer. At the opening of Act 2 O*** wears a large
Anubis-like face mask and forces Tatyana to put on a black blindfold before
leading her to the ball. Portents of death abound, either psychological or
corporeal. He then puts the same blindfold on Lenski and dances with him too
— clear inspiration for Krzysztow Warlikowski and the ‘Brokeback
Mountain’ Onegin boys in Munich. O*** is positively vulture-like when he
thrusts a sheet of paper at Tatyana in the Letter Scene and terrorizes her into
completing the missive. Her important psychological state of nervous
introspection, adolescent insecurity and romantic impetuosity are completely
subsumed by this gratuitous distraction. 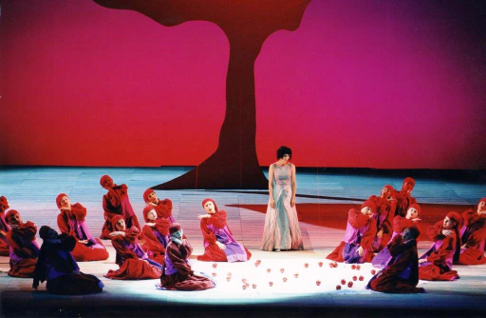 On the other hand, if ever there was an obvious corporate sponsorship nexus
between an opera production and a famous logo, it was Treli?ski’s
apple-laden images. Steve Jobs would have loved it. While Andrea Breth
converted the Salzburg stage into a giant wheat field and Robert Carsen turned
the Metropolitan’s mis-en-scËne into a carpet of dead leaves, in this Polish
version we had apples, apples, and more apples. A huge apple tree silhouette
dominates the rear of he stage; an enormous pile of apples covers a refectory
table in the first scene when Madame Larina and Filipjevna are supposed to be
making jam (apple sauce?); O*** picks up an apple in the very first bars of the
score; Onegin aggressively munches one and at the conclusion of the opera, a
veritable harvest of (rotten?) apples roll towards the front of the stage. The
autumnal demise of Onegin’s character with Granny Smith symbolism. The
installation of a catwalk around the orchestra pit brought a lot of the drama
very close to the audience but also created a certain cheap Victorian
music-hall effect. Robert Carsen used the same idea in a recent production of
Die Zauberflˆte in Baden-Baden but Schikaneder and Mozartian
Singspiel and are a very different box of apples to Aleksandr Pushkin
and Tchaikovsky. Outstanding lighting by Felice Ross created several superb
visual images of Boris Kudli?ka’s staging, such as Tatyana laying prostrate
in the shadows of bleak white birch trees at the end of Act I Sc.1. As a Pole
creating a production for a Polish staging, it was also rather brave of Mr
Treli?ski to have Emil Weslowski’s choreography of the Act III Polonaise as
a series of incredibly slow stylized robotic steps rather than the usual
swirling energy of such a powerful dance. It seemed to work. A sense of
fatalistic inevitability predominates this staging, with or without O***, and
is certainly appropriate to Aleksandr Pushkin’s characterizations or indeed
early 19th century country life in Russia in general.

The singing was for the most part more than satisfactory. In the title role,
Polish baritone Artur Ruci?ski was vocally impressive and dramatically
credible even if the cold, contemptuous arrogance of Peter Mattei in Salzburg
or Dmitri Hvorostovsky at the Met was absent. This meant his emotional collapse
in Act III when finally rejected by Tatyana was demonstrably less empathetic,
although his anguish was certainly very well acted — so much so that the
audience broke into applause before the opera had actually ended. Although the
voice was occasionally a little fuzzy, slightly pushed and sometimes lacking in
clear focus, his Act I ????? ?? ????? ????????
?????? aria was mellifluously sung and displayed a fine legato and
agreeable rich timbre, especially in the upper-middle register. In opting for
the concluding high F on ????? ??????,he sang it
forte instead of piano as indicated in the score, but a solid
ringing top is clearly one of Mr Ruci?ski’s strongest vocal
attributes.Irina Mataeva’s interpretation of Tatyana had an
Ophelia-ish quality about it which verged on the wide-eyed mystical if not
slightly demented, especially in the first two acts. There were some intonation
problems in the upper register and a rather intrusive wide vibrato which
contradicted the innocence and youth of the character so well captured by
Tatyanas such as Ileana Cotrubu? in the past or Anna Samuil in more recent
productions. While the Act I Letter Scene was seriously marred by the
distracting intrusion of O*** who alternated between a cruel, homicidal stalker
and a tender Onegin with the speed of a Rossinian hemidemisemiquaver (guardian
angel or wily temptor?) Miss Mataeva’s top Bbs were not particularly
clean and the final Ab on ??????! waspushed
and not very pleasant. 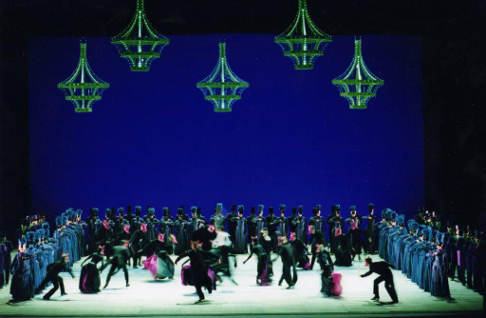 Preening across the stage in Act III in a Schiaparelli pink cocktail frock,
she looked like Audrey Hepburn in ‘Breakfast at Tiffany’s’ — complete
with cigarette holder. Fortunately by the second scene her singing of
??????! ? ????? ?????? had a much improved vocal
assurance and the lower tessitura seemed more comfortable, not withstanding the
persistent vibrato. Even the final powerful fff B natural on
?????! was well taken.Despite showing surprising
sexuality with Lensky, the Olga of Karolina Sikora, was dramatically rather
bland, vocally underpowered and burdened with an unattractive wobble. Ewa
Marciniec’s Larina was the same without the vibrato — or the sex. As
Lensky, Ukrainian tenor du jour sensation Pavlo Tolstoy sang with
restrained elegance, a warm forward dulcet timbre and excellent Alfredo
Krause-like phrasing. His ? ????? ??? ????? ???
????? ardent outburst to Olga in Act I was passionate without being
vulgar; the beginning of the Act II Sc.1 finale ensemble?????
????! had a really beautiful tender mezza-voce cantilena
andKuda,kuda in Act II was movingly sung without being
saccharine. His upper register, especially on the top Ab in the
ff andante mosso change on ???????? ????
was perfectly focused and the whole scena was commendable for
consistently fine intonation and bright, Italianate vocal colouring. Of the
smaller roles, the Triquet of Tomasz Piluchowski was vocally undistinguished
and had serious tempo coordination problems with the orchestra in his Act II
encomium to Tatyana. Anna Lubanska’s Filipjevna was a real delight.
Possessing a Regina Resnik-esque rich, plummy lower register and deep chest
notes, she was also dramatically an ideal incarnation of the devoted babushka.
As Prince Gremin, Aleksander Teliga lacked stage presence but made up for it
with fine, well-articulated singing and an outstanding lower register. The
final low Gb’s at ??????? had impressive strength
and projection.

The orchestra was capably led by Andriy Yurkevych. There was some fine
string playing (e.g. the cello opening to Act II Sc.2 and the introduction to
Kuda kuda); excellent brass (eg. the piano horn solo quaver
phrases beginning at measure 187 in Tatyana’s Letter Scene); delicately
balanced winds (especially the cheeky scale passage exchange between flute,
oboe and clarinet in Act I at measure 152 and during the echoed major fifth
piano quavers between flute, clarinet (and horn) beginning at the
andante change at measure 47 in Tatyana’s Letter scene. There was
also some very sensitive clarinet solos in Kuda, kuda. Unfortunately
it seemed that maestro Yurkevych was a little too concerned with not
overpowering the singers in this huge theatre, which should not have been a
concern. When freed from such constraints, such as in the ff
orchestral tutti at bars 270-293 of Tatyana’s Letter scene and the
Act III opening Polonaise, the orchestra played with powerful precision and
commendable attention to the markings of the score.

It will be interesting to see how Mr Treli?ski’s forthcoming unusual
double-bill of Iolanta and Bluebeard’s Castle (the first
co-production between the Polish National Opera and the Metropolitan Opera in
New York) will be received by operatically conservative Manhattanites.
Hopefully the Polish pippins will not be too bruised by the real Big Apple.