Although former General Director Ian Campbell tried to shut down the opera last year, it is back stronger, a bit leaner, but more viable than ever. This city has proved beyond any doubt that it intends to have an opera company. San Diego Opera’s other shows this season will include: Don Giovanni, Nixon in China, a special Fiftieth Anniversary Concert, and the Mariachi opera El Pasado Nunca Se Termina.
Isabella Bywater’s set consisted of movable buildings, one of which contained the garret to be seen in the first and last act on the upper floor. Since the building was not down front, the singers were upstairs and upstage for most of both acts. Bywater’s costumes set the action in the nineteen thirties and they were quite accurate, but not at all colorful or sexy. As Musetta, Sara Gartland sang her spectacular Waltz Song with radiant, passionate tones in a soft, almost colorless dress, but her actions attracted a great deal of attention. Her personality reignited the flame of her affair with former lover, Marcello, sung by Morgan Smith whose baritone voice shone like burnished brass.
Tenor Harold Meers and soprano Alyson Cambridge were a charming couple as the writer and his ailing neighbor. Visually, they were beautifully matched. Meers’ sound is on the small side but he has a beautiful timbre. Cambridge, however, has an increasingly powerful voice that soared over the orchestra with tonal opulence. One of the most beautiful moments in the performance occurred when Cambridge sang Mimi’s “Addio senza rancor.” (Goodbye with no hard feelings). The audience heard her love for him in the plaintive tone of her voice. Hers is a career to watch. 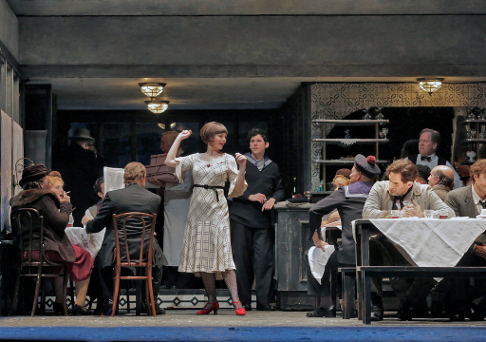 Sara Gartland as Musetta charms cafÈ patrons as Marcello (Malcolm Smith) and Alcindoro (Scott Sikon) look on.
Baritone Malcolm MacKenzie was a robust Schaunard whose tale of the dying parrot showed his resonant tones and artful phrasing. As Colline, Christian Van Horn sang his touching “Overcoat Aria” with solid ringing sounds. Each of the principal singers portrayed a believable character and together they were a delightful group of Bohemians living and loving in Paris. Veteran character role artist Scott Sikon was an amusing Benoit and an overburdened Alcindoro, while as Parpignol, the toy vendor, Enrique Toral seemed to have a voice that should be heard more often.
Director Bywater’s staging was always lively. Act II, in particular was fascinating as Parisians of all ages and from all walks of life celebrated Christmas Eve on the streets of the city. Although the orchestral balances were not always perfect, conductor Karen Keltner kept the tension firm and the tempi brisk up to the last moment when Mimi’s death ended the story with stark tragedy.
Maria Nockin