The role of Anna is sung by Sondra Radvanovsky and that of her lady-in-waiting Jane Seymour by Jamie Barton. Henry VIII is portrayed by bass John Relyea and Lord Percy by Bryan Hymel. Mezzo-soprano Kelley O’Connor sings the travesti role of the page Smeton, Richard Ollarsaba is Lord Rochford, brother of Anne, and John Irvin portrays Lord Hervey. Patrick Summers conducts the Lyric Opera Orchestra and Michael Black is the Chorus Master. Both Messrs. Hymel and Summers are making their Lyric Opera debuts in these performances. The production team includes Kevin Newbury, Neil Patel, Jessica Jahn, and D.M. Wood as Director, Set Designer, Costume Designer, and Lighting Designer respectively, all in their debuts with Lyric Opera. 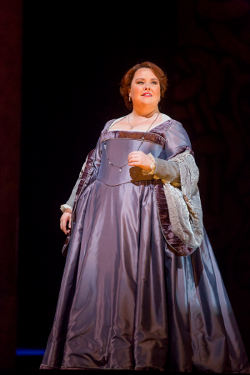 Jamie Barton as Jane Seymour
The sinfonia, or overture starting the work, is played with only several cuts and thus introduces not only significant melodies but also the complexity of moods in effect at the Tudor court. The sprightly playing from the string section leading into positive tones for the full orchestra alternates with an intermittent backdrop of snare drums suggesting the actual power of the royal court. Indeed the political and emotional constellations of the era are highlighted by the symbolic Tudor rose displayed prominently on the scrim covering the stage. As a preparation for the conflicts in Act I, Ms. Radvanovsky, clutching herself in pregnancy, appears on a revolving stage mechanism. The chorus begins to sing, as though in sympathetic commentary, of Anne’s current disfavor vis-‡-vis her husband, King Henry. Surrounded by this flurry of tensions Jane, Anne, and Smeton express their emotions and misgivings in the opening scene. From the first, Ms. Barton makes an unforgettable impression as Jane Seymour, vocally secure and dramatically exciting. In her first words, “Ella di me sollecita,” [“She has summoned me”] Jane reflects on her relationship to Anne whom she calls her “vittima,” primarily because of the liaison already initiated with the King. At the moment when she sings of the doubts which have plagued her heart, Barton’s voice extends upward on the words, “Qual dubbio in me si Ë desto!” [“What doubts arise in me!”]. Her incorporation of embellishments on the word “amor” as an ambivalent force addressed effectively both the anticipation of the King’s attentions and the harm caused ultimately to her mistress. Soon after the entrance of Anne, the page Smeton is invited to entertain with song the assembled ladies of the Queen’s retinue. Ms. O’Connor’s performance of “Deh! Non voler costringere” [“Do not try to force”] showcases a rich, flexible lower register, coupled with requisite skills at emphatic decoration, in this serenade to the Queen’s unhappiness. At the same time, O’Connor has assumed the character’s movements so that she is fully convincing in the role of a young man. Anne’s reaction to the serenade, declaring that Smeton has stirred her heart, is delivered by Ms. Radvanovsky in a touching performance. The upper extension of her voice is joined in convincing transitions and decorative slides to the lower reaches of her troubled spirit. Anne’s following cabaletta, “Non v’ha sguardo” [“No one can see”], is taken at a brisker tempo than expected, yet the decoration and emotional fervor on the repeated final line, “Non lasciarti lusingar” [“Do not let yourself be tempted”], bring the scene to an effective close.
Before the entrance of King Henry in the next scene Jane muses further on her lot: she fears the eventual “dÏ tremendo” [“doomsday”], expressed here by Barton with sonorous, low pitches. Fits of conscience continue during the ensuing dialogue with the King. Here Mr. Relyea demonstrates admirable range and command of bel canto technique when he encourages Jane to share their love in the light of day. Once Relyea’s Henry declares his hatred for Anne, the duet between the lovers develops to an intense high point of the first act. Jane’s lines vacillate here in emphasis between Barton’s searing top notes on “ultimo” [“final (encounter)”], or “Amore, e fama” [“Love and reputation”] in contrast to her deeply expressed “vergogna” [“shame”]. In response, Relyea’s fluid embellishments on “SÏ: l’avrete” [“Yes: you will have it”] and “Non avr‡ Seymour rivale” [“Seymour shall have no rival”] are used to reassure Jane. In this performance Henry’s strategy succeeds, since musically their voices merge in the final part of the duet. As a symbol of the future, both characters ascend the throne together at the close of the scene while Anne is seen alone on a staircase above. 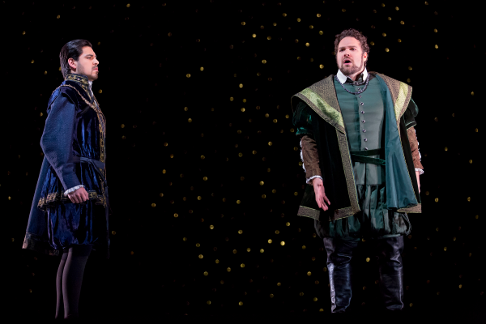 Richard Ollarsaba as Rochford and Bryan Hymel as Percy
The introduction of Anne’s former suitor, Lord Percy dominates the next part and motivates the action to conclude the first act. His presence is welcomed by Rochford, who has not seen his friend at the English court since he was exiled on the basis of unproven accusations. In Percy’s first aria, “Da quel dÏ’ [“From the day”] Mr. Hymel provides enthusiastic declamation on “ogni terra” [“every county”] and “la mia tomba” [“my grave”]. Elsewhere, in the following cabaletta “Ah! CosÏ ne’ dÏ ridenti” [“Ah! Thus in the happy days”], placement of trills was accurately, if not comfortably produced. During the subsequent trio between Henry, Anne, and Percy, the King welcomes ostensibly the return of the nobleman but credits Anne with speaking for his innocence. In the ensemble Hymel’s vocal projection is credibly even with his declaration “Voi, Regina!” [“You, my queen”] showing an especially fervent appeal. A royal hunt is announced just as Henry conspires with Lord Harvey to have Anne and her former suitor remain under scrutiny.
In the scene propelling the King’s eventual allegations Smeton enters the corridor leading to Anne’s chambers. He intends to return a portrait of Anne stolen in his own spirit of infatuated devotion to the Queen. O’Connor’s performance of Smeton’s aria, “Ah! Parea che per incanto” [“Ah! You seemed as if by magic”], a piece often cut in past performances of the opera, catches the spirit of anticipation, passion, and fear bundled into the youth’s resolve. Anne submits to her brother Rochfort’s urging that she grant Percy a hearing. Mr. Ollarsaba’s pleading as Rochfort on behalf of his friend is convincingly performed and serves as a prelude to the fate that will join both young men before too long. As expected, Percy’s meeting with Anne is here fraught with emotion. Just as Percy threatens to turn his own sword upon himself in despair, the lines “Anna per me tu sei, Anna soltanto” [“To me you are Anne, only Anne] are uttered by Hymel with touching, lyrical finesse. At this moment Smeton initiates a struggle coinciding with King Henry’s return. As he seizes upon this opportunity to accuse Anne (“che costei tradiva il Re”) [“this woman has betrayed the King”], Relyea’s pronouncements of treachery intensify into the final ensemble. Anne’s protests for understanding and mercy yield only the King’s declaration, here very well intoned, that the “Giudice” [“judges”] will determine the credibility of Anne’s defense.
From the start of Act II a relentless sadness or inevitable resignation pervades each of the scenes. At first the chorus of women in Anne’s service comment on her solitude and their loyalty. Lord Harvey now communicates to Anne the news that the women must leave her. In her prayer to ask for divine counsel, “Dio che mi vedi in core” [“God, you who can see into my heart”], Radvanovsky sings softly so that high notes melt into subtle diminuendo. When Jane enters the Queen’s chamber, the exchange between the two women evolves into the expected confession which the “rivale” can no longer suppress. As a reflection of Anne’s prayer, Barton utters Jane’s appeal of “Perdono!” while ending on a comparably soft, shaded note.
The revelation that Jane has indeed supplanted Anne in the King’s affections leads to a stirring dramatic duet, “Dal mi cor punito io sono” [“I am punished by my own heart”], comparable to the scene between Jane and Henry in Act I. Once the legal proceedings to discredit Anne have begun, the King refuses to interfere or consider mercy. In the trio sung together with Anne and Percy, “Ambo morrete, o perfidi” [“You will both die, o wicked ones“], Relyea’s lyrical projection stands out as he refers to them with the term “Coppia iniqua” [“Guilty pair”], a phrase central to Anne’s own final solo at the close of the opera. Although Percy and Rochford receive news that Henry will spare their lives, they refuse his clemency and prefer to follow Anne in loyalty to her and their execution. Percy attempts to dissuade Rochford from this decision in the expressive aria, “Vivi tu” [“You must live”]. Hymel performs this piece with admirable descending embellishments, a heart-felt “lagrimar” [“to weep”], and a superb top note at the close.
In her final aria Anne indeed reverses the appellation “Coppia iniqua” [“Guilty pair”], in reference now to Henry and Jane. Radvanovsky introduces dramatic, powerful forte notes at the start of the piece, yet she subsides into lyrical, decorated phrasing while speaking her words of pardon. The audience is left with a sympathetic image of the Queen facing execution.
Salvatore Calomino